A FEW WORDS ON HARRIET 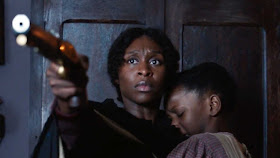 These days I try my best to only write about and highlight movies that I enjoy but Kasi Lemmons’ recent Harriet Tubman biopic is, as the kids say today, problematic...

Bottom line – Harriet is a prime example of people (mostly Black people) supporting something because it’s Black. That’s not to say people of other races aren’t championing this movie. But for the most part it’s Black people. Let’s not act like this isn’t a “thing”.

For those of you reading this that grew up in a Black household, chances are you had Parents that only expressed support & concern for Blackness & Black entities (athletes, actors, businesses, etc). That’s important. Non-Black institutions (specifically White institutions) could care less about Black people, Black businesses, etc, on a whole. So we need to support ourselves (especially when others won’t do it). But in my humble opinion, I think this kind of support can sometimes get out of hand and become very patronizing. Take Tyler Perry for example. For years he’s gotten praise for everything he does with the exception of one thing – quality. I’m sure there’s folks out there who would argue that his movies are good or enjoyable, but for the most part a lot people support him because he’s successful at making money. That’s important for what he does but he’s also a writer, actor & director. He is an artist. His actual art is rarely praised. Think for a moment – how often do you ever hear anyone say a Tyler Perry movie is genuinely good or great? How often do you hear someone praise a performance in one of his movies? Sure he puts out six projects a year and has the biggest movie studio in the world but are those projects/movies good? I’m a fan of supporting your own. But support it when it’s actually good. Don’t support something just because. 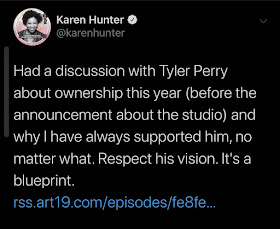 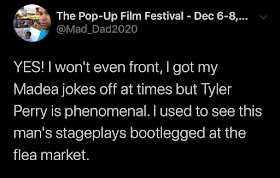 I’m convinced Harriet is another example of this kind of support.

What exactly do people like about this Harriet Tubman movie? I’m aware there’s a lot of (justified) pushback & backlash against it (there’s even a #notmyharriet hashtag going around on social media) however there’s still a large sector of folks who not only like it but are going out of their way to defend it.

I think a big part of this support for Harriet (god, I’m so sick of that term “support” and how it’s used these days) is that some people can’t dissociate the movie from the actual person that Harriet was (similar to the subpar film Birth Of A Nation and the actual person that was Nat Turner). There is a difference. Not liking a movie about someone doesn’t mean you dislike the person. That would seem like an obvious statement but it doesn’t seem to be the case here. I sometimes wish people would stop for moment, think for a bit and use some logic & common sense when assessing something (especially art). Unfortunately people see a Harriet Tubman movie and automatically stand behind it because of who the movie is about and not the actual quality of the movie. 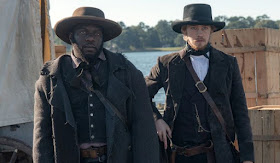 First of all - the black slave bounty hunter character (“Bigger Long”) wasn’t even a real person thus making that portion/element of the movie fabricated. Harriet Tubman’s ACTUAL story was amazing (pre & post-slavery). Why make stuff up?! There’s plenty of interesting factual stuff to go off of. Furthermore - why make stuff up in a movie that’s supposed to be a BIOPIC/TRUE STORY? I’m aware true stories & biopics have to take liberties and make omissions for reasons ranging from legal to historical discrepancies. Look at Malcolm X. The Baines character wasn’t a real person. He was an amalgam of people ranging from various prisoners to Malcolm X’s own sister who all played a major role in converting him to the nation of Islam. But for various reasons Spike Lee wasn’t able to show these people in the movie so he had to improvise. Spike Lee’s Malcolm X biopic was also marketed alongside Alex Haley’s autobiography of Malcolm X (it was the source material) so folks were encouraged to seek out the real story before or after seeing the movie.

That’s not the case with Harriet. Bigger Long was made up out of thin air. And to justify the inclusion of Bigger Long in the Harriet Tubman story, there’s suddenly tons of articles about real Black slave bounty hunters popping up everywhere. That may be true. I’m sure there’s some complicated grey area, but I don’t doubt there were Black bounty hunters tracking down runaway slaves at the order of white people in power. Fine. But what does that have to do with Harriet Tubman’s story? It wasn’t true so why include it? I know some folks reading this might think; “what’s the big deal? It’s just one aspect.” There are certainly many things wrong with this movie, but the Bigger Long character is a huge problem as far as I’m concerned and it goes deeper just this movie. Don’t you think the filmmakers & writers owe Harriet Tubman respect by making the movie accurate? Or as accurate as possible? If you jump straight to a made up villain out of Django Unchained (or whatever jive-talkin’ blaxploitation movie Quentin Tarantino gets inspiration from) - how much research did you do?

I’ll get off my high horse momentarily but in today’s clickbait/read the headline first and the actual body of the article later-era we live in, you can’t assume that people will take it upon themselves to get educated on something after seeing a movie.

Also - the character's name was “BIGGER LONG”. There’s no way the folks in the writer’s room didn’t at least snicker when coming up with that name. Do people not see the many levels of problems with that name? Especially naming a Black male character that? From the sexual fetisihization of Black men and their dicks to the fact that Bigger Long is a stupid fucking name. How can anyone take that serious within a film that’s supposed to be taken seriously?

The Bigger Long character plays in to these kinds of tweets & thoughts.

It’s playing with fire to present a (made up) Black male character with a porn star’s name as the villain. All it does is fuel this unjust narrative about Black men suddenly being trash and/or the “weakest link”. I find this funny because everyone always loves to use the murder of innocent Black men as an excuse to march and turn in to an activist with his/her own personal agendas that really have nothing to do with Black men or their lives mattering. But, as “woke” people love to say on twitter: “we’re not ready to have that conversation yet...” (Do some Black men need to get their shit together? Sure. But let’s not start a silly online campaign/running joke spearheaded by other Black people to smear us)

It’s also dangerous to take liberties like this because - like I eluded to earlier - not everyone goes to google/research/Wikipedia after a movie is over. Some folks will take things at face value which is kind of scary. If you want to take liberties then don’t say something is “based on a true story”.

The other problem with this Bigger Long character is that he’s this one dimensional villain, while the real villain of the film (the white slave owner) is given more depth and complexity which is an even bigger insult. I mean, let me get this straight - you made up a Black character to be the bad guy but you give depth & complexity (and sympathy to a certain degree) to the white character who should have been portrayed as the real villain. I don’t see the logic in that. Some people are calling Harriet a “white savior movie” and while I don’t completely agree with that, the dynamics in this movie are all out of wack...

I guess I shouldn’t be surprised as this is isn’t Kasi Lemmon’s first time taking liberites with a real story. Her previous movie; Talk To Me (about Petty Greene) left a lot of DC natives unhappy with the final product as the movie came off more like a fairy tale than a real story.

But the Bigger Long problem isn’t the only major flaw. Cynthia Erivo’s performance as Harriet Tubman was one note/not good: always confused-looking and out of breath.

The dialogue, delivery of said dialogue and the costume design makes this movie out to be a parody/comedy sketch of a slave movie. Harriet is no different than something like Django Unchained which also turned a slave story – although completely made-up - in to a weird uncomfortable mash-up of an entertaining action-adventure story with very little depth on the slavery end of things. I’d expect that from a white director but not a black one.

I guess the one good thing to come out of all this Harriet mess is that I don’t see many more high profile slave stories hitting theaters any time soon which is a good thing at this point. I’m not one of these Black movie goers that’s sick of seeing slave movies on the big screen. I’m sick of terribly executed slave stories on the big screen. Let’s not forget Harriet comes only a few years after Nate Parker’s disappointing Birth Of A Nation and UPN’s terrible Underground Railroad show. I’m aware a big part of why Birth Of A Nation got no support and essentially disappeared from existence is due to Nate Parker’s past, but as someone who has actually seen the movie – it just isn’t a good movie (read my thoughts here).

I genuinely wonder if folks are giving Harriet a pass because it’s made by the same woman who directed Eve’s Bayou. Or are folks afraid to criticize this movie because it deals with slavery? Can we stop giving out participation trophies for everything?