A FEW WORDS ON BRUNO DUMONT'S JOAN OF ARC 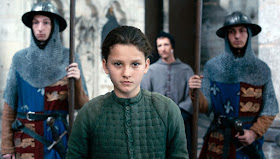 If Jeannette: The Childhood Of Joan Of Arc (the prequel/first installment in Bruno Dumont’s Joan Of Arc saga) is Drive, then Joan Of Arc (2020) is Only God Forgives. I realize this may not be the best sell to some of you as not everyone is a fan of either Nicolas Winding Refn and/or Bruno Dumont (especially not Dumont), but both Refn & Dumont are PINNLAND EMPIRE favorites so this comparison is on brand for me (some of you reading should know this by now). I guess what I’m trying to say is that Jeannette is more ”exciting” & externally intense while Joan Of Arc is more droning, meditative & intentionally slow. The musical numbers featured in Jeannette are heavy metal-inspired (a big draw/selling point for the film) and the score/musical numbers in Jeanette seem to come right out of Brian Eno’s Yamaha keyboard circa 1982...


In Bruno Dumont’s latest film we follow Joan Of Arc on trial after her fight against the English army (a slightly older Lise Leplat Prudhomm returns in the title role giving one of my personal favorite performances of the year so far). The basic story is nothing new. Everyone form Carl Theodor Dreyer (The Passion Of Joan Of Arc) & Robert Bresson (The Trial Of Joan Of Arc) to Victor Flemming (Joan Of Arc) & Luc Besson (The Messenger: The Story Of Joan Of Arc) has covered this subject matter. It’s history that just about all of us know even if it’s on a surface level. I think Bruno Dumont knew this which is why he not only made his series of films a musical, but he also added his signature Bruno Dumont touch. It’s all there. Awkward acting & exchanges of dialogue between mostly non-professional actors, dark/surreal humor mixed with drama and - there’s no light or politically correct way to say this, but - homely & odd-looking people make up most of the cast (something Dumont has been doing since day one which at times does feel like Harmony Korine-esque exploitation at first, but the more you get to know about Dumont you know his intentions are mostly genuine). He seemed to approach this project with the thought process of; “If I’m going to tell a story that’s already been told many times before, I might as well try to do it different.” And he certainly did that. But no matter how “different” this version may be to some, he still did his homework on the life of Joan Of Arc and the history surrounding her (he doesn’t use the weirdness and non-traditional approach as an excuse to ignore historical aspects or to be lazy).

Joan Of Arc makes Jeannette a much more impactful film in retrospect (it goes without saying that you should see the first part). Jeanette is essentially a coming of age tale/spiritual awakening. Right away this sets Joan Of Arc apart from its predecessors because rather than be thrown right in to the trial & execution, we watch Joan/Lise Leplat Prudhomm age through two films.


We’re in the midst of her coming of age: she’s grown up a little, she's no longer the little girl she was in Jeannette, and the child-like side to her has changed too. After all, remember she’s now a military leader. She’s acquired a confidence, a strength which needed to be filmed. She’s a soldier—a brave soldier, someone who managed to put King Charles VII back on his throne. And we needed to film and show that glory. Which meant we needed to design a glorious mise-en-scène, to capture her hierarchical dimension, her strength. - Bruno Dumont (mubi.com/notebook)

Carl Theordor Dreyer's influence on Dumont has been well documented long before PINNLAND EMPIRE even existed and Joan Of Arc is just another ongoing example...

And 25+ years later we find Bruno Dumont tackling a story that Bresson already did 60 years ago...

What I find most interesting is that even though this movie is the “weird one” out of the Joan Of Arc films, Dumont is still connected to Robert Bresson after almost 25 years (for those of you that don’t know, following Dumont's first two features in the 90’s he was dubbed the “son of Bresson” due to both director’s similar approach to dead pan/non expressive acting from their mostly non-professional casts.
In my opinion this version of Joan Of Arc deserves to be mentioned in the same breath as The Trial Of Joan Of Arc. Robert Bresson added his unique & signature style to the story of Joan Of Arc as well (intentional lack of emotion, non-professional actors, dry/deadpan delivery, etc). So this isn't the first non-traditional/slightly experimental retelling of the story of Joan Of Arc.

I always have to caution readers that are unfamiliar with Bruno Dumont's films that his style is an acquired taste, but between the lead performance and the amazing score - this is easily my favorite film of 2020 thus far...