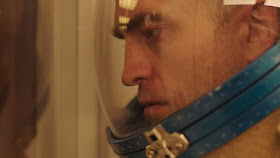 I’ll be writing about this at length in the future but I just wanted to get some quick thoughts out while they’re fresh in my head...

I hate endlessly gushing over a movie without giving any kind of critical commentary but there’s nothing like waiting years to see a movie directed by your favorite filmmaker that actually pays off. Best feeling in the world. I’ve come to the realization that I’m not the biggest fan of Let The Sunshine In, and while Bastards is “cool” & moody, I think about the film’s score more than the actual film (her barely seen short short; Voila L’enchainment is pretty good but it’s more of an experiment. And because hardly anyone has seen it, it doesn’t really count). So it's been almost a decade (White Material) since Denis has made something truly impactful in my book.

At 70+ years old, Claire Denis is still trying out new things. High Life is her first stab at science fiction. Stuart Staples’ score is the most droning thing he’s ever done for Denis, and, with the exception of Juliette Binoche, all her cast members are new faces (Denis almost always stays loyal to her troupe of regular actors). According to a few sources, Denis had Vincent Gallo in mind for the lead but I think Pattinson was the right choice (High Life co-stars Robert Pattinson & Juliette Binoche previously worked together on David Cronenberg’s Cosmopolis so perhaps their chemistry oozed over in to Denis’ latest).

High Life has a plot but in my opinion it’s secondary (something about prisoners from earth being experimented on in space in order to preserve the human race). This is a movie that lingers and I love every second of it. I prefer High Life over movies like Moon and even Solaris but they all share the same DNA and have more than a few similarities (loneliness, isolation, losing a grip on reality, etc).


Sorry but I have to be predictable and compare High Life to Solaris real quick...


The biggest thing that sets High Life apart from other sprawling offbeat science fiction movies is it’s strange sensuality and sexuality (one scene involving Juliette Binoche looks like something out of Amat Escalante’s The Untamed or Andrzej Żuławski’s Possession).

While there are quite a few subconscious visual similarities to obvious sources like Kubrick's 2001...


I know I’ve just seen this less than 24 hours ago but High Life might be my favorite of the festival so far (I hesitate to say that given my bias towards Claire Denis). This isn’t for everyone (and I honestly get that especially if you’re not in to sparse/minimal dialogue, vagueness, semen and isolated moments of sexual aggression & abuse towards women) but true Denis fans should love this.