If you're certain she's a match, do it - take my daughter's kidney.

Lowlife doesn’t delve very deep in to the kidney harvesting/transplantation process (although there is a rather gruesome scene early on in the film that shows the villain – “Teddy” – harvesting the organs of a woman). But I didn’t expect that (and neither should you). Honestly – any film that sheds any kind of light on kidney disease is alright in my book...

One of the most interesting aspects about Lowlife is that it plays with/(possibly) pokes fun at Quentin Tarantino’s style from the 90’s, yet at the same time does that style better.
The similarities between Lowlife and something like Pulp Fiction are undeniable as far as I'm concerned (on the surface, both films are Los Angeles-based multi-character/interwoven stories).
By the mid/late 90’s you would have thought Quentin Tarantino invented this format of storytelling based on what some critics & fans were saying but that’s hardly the case.
However - Pulp Fiction did in fact directly influence a lot of films from Two Days In The Valley to Go. Lowlife is just another example of films to be (indirectly?) influenced by Pulp Fiction & Reservoir Dog. The only thing is Lowlife might be the best one. Or, like I eluded to earlier, possibly even better than its predecessor.

Both Pulp Fiction & Lowlife have athletes trying to honor their father’s lineage (in Pulp Fiction we have the Butch/watch story whereas Lowlife gives us a 2nd generation Lucha Libre Wrestler trying to honor his luchador legacy). Both films give us a pair of henchmen trying to carry out a mission that goes horribly wrong. We have main characters in both films fighting a drug addiction that never really gets any type of resolution (not saying there needs to be resolution) and both; Pulp Fiction & Lowlife have intimidating crime bosses that carry a serious amount clout in their respective L.A. crime scenes.

and I may be reaching here but I also see a few references to Kubrick... 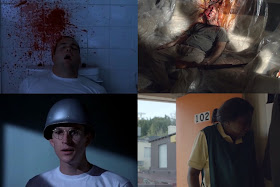 Lowlife follows various characters that are all connected through a pregnant woman and her soon to be harvested kidney. Beyond that I can’t say much without spoiling the film but trust that it’s the movie event of 2018 thus far.

Now...I am a kidney transplant recipient who happens to love wrestling & the importance of luchador masks so I could be biased (has there ever been a film to combine both elements so well?). But I do have a 100% success rate in recommending this film to people so far... (actually - I cant think of an American film to hammer home the importance of the luchdor in Mexican culture & folklore).


My praise of Lowlife doesn’t come without some type of disclaimer. This is my personal favorite movie of the year so far but it is an acquired taste. The humor is random & lowkey surreal. The violence is sometimes brutal and not for everyone. And the most redeemable character in the entire movie has a swastika tattoo on his face (spoiler - he isn’t a nazi or a racist at all. But you have to watch the movie to see what I mean).

Now...the biggest difference between Lowlife & Pulp Fiction/Reservoir Dogs is the handling of race & racism. First of all - Lowlife Director Ryan Prows actually acknowledges that there are Mexican people in Los Angeles whereas Pulp Fiction doesn’t (not that it’s Quentin Tarantino’s job to represent every type of race in the world but when you’re dealing with L.A., it’s kind of strange to see very little to no Latino representation).

When something racist happens in Pulp Fiction you're kind of supposed to snicker or flat-out laugh at said racism (take Quentin Tarantino shouting “DEAD N*GGER STORAGE” in Pulp Fiction). When something racist takes place in Lowlife, I get the sense you’re supposed to laugh at the absurdity & fucked up audacity behind the racist moments or comments. I think that’s why I enjoyed this film so much. At its core, Lowlife is a dark & fucked up movie with scenes of suicide,  obvious implications of rape & police brutality. But there’s still humor in most frames of the film. Lots of humor. That’s the thing - it’s a comedy. A dark comedy but a comedy nonetheless. It’s difficult to pull off a comedy with those aforementioned elements but Prows certainly succeeded. 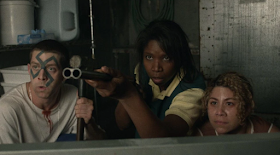 Not to sound like my anti-Donald Trump facebook timeline, but there’s no denying that Lowlife is a comment on the post-Obama/present-day Trump world we Americans live in. All throughout Lowlife we see on-the-nose imagery & scenes of police brutality against Black & Brown people and the deportation of Latinos. I’d find it hard to believe that this was coincidental. Unnecessary brutality against Brown skin people seems to be more prevalent these days now that everyone has the ability to film things on the spot (Some older folks would argue things are just the same. People just didn’t have portable cameras handy decades ago).


Lowlife is essentially the phrase; “laughing to keep from crying” in cinematic form.
The scenarios & stories in the film are so dark & cruel (kind of like the world we live in today) that you almost have to laugh at the absurdity to not fall in to a deep depression.