JEANNETTE: THE CHILDHOOD OF JOAN OF ARC 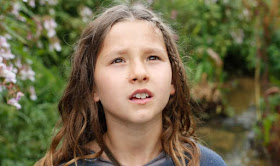 Somewhere between Camille Claudel, 1915 & Li’l Quinquin is where Bruno Dumont found his (new) stride. I don’t mean to sound condescending as if he’s some up-and-coming filmmaker that’s “finding himself”. I’ve been a Dumont fan since day one (The Life Of Jesus). But these last few years have been exceptional. His style has always been an acquired taste but in recent years he’s added a few ingredients to his work that might make him slightly more appealing to others. Dumont’s mixture of established actors (most notably Juliette Binoche) alongside unpolished/non-professional child actors seems to be a working formula for the French director (Dumont worked with primarily all non-professional actors for the first half of his career). I used to think Binoche was his key winning ingredient in recent years but Jeannette, The Childhood Of Joan Of Arc disproves that theory. Dumont’s latest film, about the early years of Joan Of Arc, works without the presence of recent Bruno Dumont regular; Binoche. Jeannette works - and forgive me for sounding so cliché – because it breaks a lot of conventions that come along with a “biopic”. Those of you familiar with Bruno Dumont should know that rule breaking comes with the territory. In both Slack Bay & L’Humanite we see our respective protagonists levitate for no reason. At the end of Towards Satan, we witness an unexpected resurrection. And the entire Li’l Quinquin series comes off like an even more random (French) version of Twin Peaks. Randomness & surreality are nothing new within the cinematic universe of Dumont. But this young Joan Of Arc movie is a musical. A period musical with modern songs. At random moments our characters break out in to aggressive heavy metal & punk rock-inspired melodies accompanied with interpretive dance moves (there’s even some head-banging). Then suddenly the music transitions to a more classical/folk genre (and in between the song & dance we have moments of traditional dialogue. But not much). That may sound a little bonkers to some of you (and it kind of is), but it’s the good kind of bonkers.

After two decades of strange/surreal/unconventional filmmaking - what else was there for Bruno Dumont to do? A lot of directors with distinct styles start to imitate themselves after a while and I get the feeling that Dumont didn’t want to fall in to that trap. He stepped outside of his comfort zone with this one. Not only is the singing sometimes off key but it is occasionally off beat. But that’s kind of the point. The approach is raw much like the spirit & performances of our young actresses who portray young Jeannette.


The physicality in Jeannette is reminiscent of The Exorcist...

and even Wayne's World...


Actually, the entire film has a Carl Theodore Dreyer vibe...


Jeannette, The Childhood Of Joan Of Arc is far from traditional. This film follows down the same path as works like Walker, Marie Antoinette (2006), Zama & Swoon in that the story mixes modern elements with dated/historic elements and has an overall (intentionally) “off” feel. In Walker, we see helicopters and automatic assault rifles. Zama looks fairly traditional but the warped ambient electronic score gives it a modern touch. And both Swoon & Marie Antoinette feature lots of modern elements like rotary phones & basketball sneakers long before any of those items would have been invented.

In Jeannette, The Childhood Of Joan Of Arc, we follow our future heroine (at two different early stages/chapters in life) as she contemplates everything from her existence on earth to the necessity of war (part of this film’s charm is watching children/youth talk about subject matter that most people would associate with adults).


At this point we know the popular story of Joan Of Arc (maybe not her youth so much but still). If you’re going to approach her life on film at this point in the game you’d better put a fresh spin on it. And given that this is essentially an “origin story”, you’d better put an even bigger spin on this as to not blend in with a million other movies. Ever since Christopher Nolan’s Batman Begins, origin stories have been all the craze in cinema for well over a decade. And this branches off beyond superhero/comic book-based films. A few years ago, Terrence Malick protégé; AJ Edwards made an Abraham Lincoln origin story (The Better Angels) while just last year Terence Davies showed us the early part of Emily Dickinson’s life in the first 1/4 of A Quiet Passion (Jeannette kind of borrows a bit of its approach from A Quite Passion in that it's told in two different sections). Rather than follow down the same lane as the aforementioned period dramas (which are both good/solid in their own right), Bruno Dumont went completely out of the box (and out of his comfort zone) and made an unconventional biopic that may not be for everyone (I’m sure some history buffs will consider this to be silly and possibly blasphemous), but I’m sure cinephiles with a taste for all things odd/different will enjoy it very much.

Bruno Dumont saved us years of re-hashed subject matter & redundant biopics and got right down to the deconstruction of what a biopic/origin story can be. This is one of those films that I cant exactly defend if one were to express their distaste. I get it. But Bruno Dumont swung for the fences, and, in my opinion, he pretty much hit a homerun as far as I’m concerned. Jeannette is a breath of fresh air in a sea of run of the mill biopics.