Following up his Expendables triple feature (Delta Force, Out For Justice & Marked For Death), Matt Reddick is back again with an often forgotten about John Frankenheimer horror film (co-starring Talia Shire in a non-Rocky/Godfather related role) that I haven’t thought about it YEARS. Enjoy…

First, thanks to Marcus for giving me some time here to share my thoughts.

I only decided to watch Prophecy because it was directed by John Frankenheimer. I’ve been a fan of his since I watched The Manchurian Candidate in college. I watched nearly all of his other movies and, with the exception of his 80s films, really enjoyed them. Prophecy, AFAIK, is not available on DVD so I only recently found it on the internet. It was made during a time of the “eco-horror” fad, which followed the success of Jaws. Most of them had the same basic premise: Animals or the environment gone amok after humans have destroyed their habitat or offspring. Most were terrible (The Swarm, Squirm, Empire of the Ants, Food of the Gods) and a few were somewhat interesting (Piranha, Orca). I vaguely remember seeing most of these as a child but they didn’t leave much of an impression. It was just something to watch. The opening scene sets the mood perfectly for a horror film - Bouncing lights with animals panting, the wind howls as the credits roll which is immediately followed by the introduction of decent (yet typical) suspenseful 70’s score. The editing gets more hectic but the shots are more fully composed and we understand that there’s a group of men with hunting dogs racing through a forest at night. They die mysteriously. The following scenes show the aftermath with classical music playing over it. That in turn leads us to an introduction of the two main characters (Talia Shire and Robert Foxworth). Just under 10 minutes it’s effective and solid filmmaking. I was impressed and engaged.

As an aside, I’m always fascinated by 70s movies that have urban settings. Were things as ridiculously bad as they appear (below) here in D.C.?

Anyway, as the plot is introduced, dread sets in. Not the expected fearfulness from a horror movie. Instead, a bland, preachy message movie starts to develop. I’ll try to summarize: A doctor, for the flimsiest of reasons, is sent to a logging site in Maine to investigate the environmental impact that the loggers are making. Additionally, the local Indians are protesting and blockading the logging operations while people are mysteriously disappearing. The script makes an effort but I found it a little stale. The owner of the logging company (played by Richard Dysart in a solid turn) gives a typical broad brush of the legal and ethical actions of the company. He’s also casually racist towards the Indian tribe. Armand Asante, as the leader of the protesting tribe, is obnoxious, arrogant, and unintentionally hilarious. A lowlight is his fighing a chainsaw-wielding logger with an axe! Foxworth is cynical, irritable and in typical 70s fashion, has a bleak outlook on life. Talie Shire might be the most interesting character. She is a professional cellist, who, after finding out she’s pregnant, struggles with her relationship with Foxworth (who does not want children). The operations of the logging company are shown in great detail, to the detriment of the narrative, yet it still manages to be interesting. The wife’s pregnancy subplot adds an interesting element, particularly later, when she realizes she’s eaten mercury-tainted fish (a second viewing reveals s several shots showing Shire’s POV). The mutated monster is also a female and, predictably, becomes enraged when her cubs are threatened. The environmental theme is emphasized to include not just nature, but societal and personal responsibility as well. 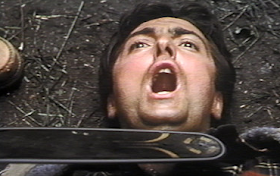 Ultimately, the monster is what sinks this film. About half way through we’re shown a decent look at the bear, but the kill is straight up comedy:

The final confrontation, where the mother bear runs wild trying to recover her cub, drags on for almost a half hour. The argument for keeping it is so it can be presented as evidence to the EPA! The budget restrictions certainly did no favors. The bear looks cheap and rubbery and inexplicably can run on its hind legs. There are several dolly shots to cover the problem of filming it running; having the camera and monster gliding on a (off-screen) track ruins any suspense or fear. Considering that the monster’s size is supposed to be an intimidating factor, there are way too many close-ups, especially in the fight scenes.
Overall, I would rate this 3/5. It has some very interesting ideas but awful special effects. On the flipside, those very same elements provide many laugh-out-loud moments. Considering the talent that was involved, it’s more a case of lamenting what might have been. This isn’t nearly as bad as IMDB/RT would lead you to believe.