Besides Ghost Dog, most of what I write about Forest Whitaker on PINNLAND EMPIRE isn’t very nice. This may be a little misleading to some of you readers because he’s actually one of my favorite actors so I owe him this blog entry which is full of nothing but nice things (for the most part). I don't mean to be so harsh on him but it’s just that he hasn't been in a good film or taken a worthy role in a while. Actually his last great performance was in a film that hasn't even been seen by most people outside of Europe (which is a bit strange because it isn’t even a European film). Mary, Abel Ferrara's 2005 religious drama that didn't get released theatrically until 2010, might be the greatest piece of acting Forest Whitaker has ever done in his entire career with the exception of maybe Bird and his stint on The Shield. It played at big festivals like Toronto & Venice, but like so many small films that make the festival circuit it had a tough time getting a distributor and barely saw the light of day. One moment Whitaker is explosive & scary (in a scene where he discovers his wife had complications with her pregnancy) and the next minute he's a vulnerable insecure cry-baby on his knees in church begging god for forgiveness (his character in the film is not only a fraud but he also cheats on his wife). Now, Mary isn’t JUST about Forest Whitaker (the film also stars Juliette Binoche, Marion Cotillard, Matthew Modine & Heather Graham) but he still kinda steals the show. Giving an actor free range to do whatever he/she wants can be a gamble and I get the feeling that’s the advice Ferrara gave Whitaker (the two have worked together before on The Invasion Of The Body Snatchers remake). Luckily Forest Whitaker didn't take advantage of that advice (that Ferrara may have very well not even given him but for all intents & purposes of this blog entry - let’s just imagine he did). Whitaker is calm and controlled in some moments when his character needs to be and when it’s time to go all out and lose it - he does. This is an Abel Ferrara film, so heavy handed religion (specifically Catholicism) should be expected. Not many people have come close to matching Harvey Keitel’s intensity in the chapel scene at the end of Bad Lieutenant (Abel Ferrara's masterpiece) but I'd say Whitaker came very close in an almost identical scene. Giving Forest Whitaker so much praise almost feels pointless as Mary doesn't even have a US region DVD yet and its main theatrical run was only for one week at Anthology Film Archives (unless I’m mistaken). If you happen to own a Multi-region DVD player I highly recommend getting this. Not only is Whitaker great, but so is the film…kinda. …Ok look, I’m gonna be honest - Mary is FAR from a masterpiece but I needed to call it that in order to get your attention. It IS very “interesting”. Let’s call it a flawed masterpiece. I appreciate the fact that Mary, along with Ferrara’s last seven years of work, is evidence that he’s still growing as a filmmaker (no matter how old he is) and is putting aside his fascination of working with rappers and “gangsta” culture (Ice-T, Schooly D, King Of New York, etc). 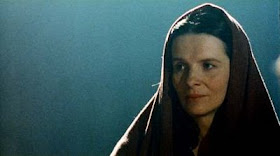 Mary wasn't exactly a response to Mel Gibson and The Passion Of The Christ...but at the same time it kinda was. In the film Matthew Modine plays; "Tony Childress" - an egocentric filmmaker/actor (clearly half modeled after Gibson and half Modeled after Ferrara himself) who's just finished shooting a film about the life of Christ told from the perspective of Mary Magdalene titled; "This Is My Blood". Childress’ film has some striking similarities to not just The Passion Of The Christ but The Last Temptation Of Christ as well (which, coincidentally stars quite a few Abel Ferrara regulars like Willem Dafoe, Harvey Keitel & Victor Argo) and its causing quite an uproar - the lead actress; "Marie Palesi" (played by Juliette Binoche) has a nervous breakdown once the production wraps, runs off to Jerusalem to find herself and become closer with God, theaters that are scheduled to play the film are receiving bomb threats all over the U.S. and everyone from The Black Panthers to the Jewish community are up in arms for reasons ranging from racism to anti-Semitism (sound familiar?). When sensational talk show host; "Ted Younger" (Whitaker) sees an opportunity to expose Childress and his film, he invites him and Marie on to his show (Tony agrees to appear on the show as long as Ted comes to the movie premier which will give it more publicity). The only problem is that Marie is somewhere in Jerusalem with no plans of leaving any time soon and no one can contact her. Ted finally manages to reach her (he’s been having an affair with one of her friends played by Marion Cotillard) but Marie has no interest in appearing on his show or going to the premier of the film either. She’s given up acting and has become this new spiritual person. Halfway in to the film Ted Younger (who's been unfaithful to his pregnant wife, played by Heather Graham) has a spiritual breakdown, admits he’s a phony (his talk show is geared towards religion and theology but he admits to not really believing in god) and seeks out Marie for some kind of spiritual guidance. The "guy who once had faith in God but now doesn't" character is a bit cliché and has been explored numerous times from Diary Of A Country Priest (Bresson) & Under The Sun Of Satan (Pilat) to Italian For Beginners & To The Wonder (Malick), but Whitaker breathes new life in to that role and plays it differently (and more volatile) than anyone else has (to my knowledge at least). Binoche also gives a good performance and Marion Cotillard, who only appears in two scenes, is good too. Between Whitaker & Binoche (who never share any screen time together in Mary, they only talk on the phone) I'm surprised this film didn't get any kind of play in 2005. I guess Mary was overshadowed by two other films that came out that same year - Cache (one of the 10 best films of the decade which co-starred Binoche) and The Last King Of Scotland (Whitaker's Oscar winning performance).

It’s understandable that Mary would be misunderstood by the few people who’ve seen it. The film is a bit chaotic, the editing and transitions from one scene to the next are abrupt from time to time, there isn't much insight or depth in to why Juliette Binoche's character suddenly has a breakdown, there’s an explosion scene that looks totally fake due to the bad CGI effect explosion and Matthew Modine's performance isn't very good in my opinion (I've never really been a fan outside of Married To The Mob). Additionally, Whitaker and Graham playing husband & wife also seemed a little…I dunno what the term is, but it’s like he was trying too hard to show an interracial couple on screen where race isn’t the issue. But on the flipside, that is a somewhat progressive (and realistic) representation of many married couples today. Plus there wasn’t a whole lot of chemistry between Whitaker & Graham (at no fault of Whitaker’s). Maybe that was the problem – I just can’t imagine those two together in real life. Religion on film (especially Catholicism & Christianity) can turn people off pretty easily (and like I already said; Abel Ferrara can be a bit heavy handed with the religion stuff). But I appreciate Ferrara’s honest & genuine attempt at trying to do something different. Plus the score is really good and goes with the film well. Given the plot, along with the year it was released (one year after The Passion) many people thought he was just trying to ride the coattails of The Passion when in fact he was just trying to address it which is something he (and any other filmmaker) has every right to do. It’s just unclear whether or not Ferrara was being critical of Gibson or supporting his right to make The Passion. Even Ferrara's motives and mission behind Mary seemed unclear. In the film, Modine's character is somewhat of a megalomaniac who only cares about the hype & publicity around his new movie while on the other hand he becomes a martyr for free expression by the end (it ends with a bomb threat being called in at the premier of the movie and Modine refuses to leave). A movie like The Passion Of The Christ, which isn't good, along with the motivation behind it is gonna bring things outta people whether they like it or think it’s stupid. Given that Abel Ferrara is clearly a strong Catholic, I imagine he felt the need to make this. What I’m about to say is going to make no sense but this is his most flawed film yet at the same time one of his best films since The Funeral (a criminally underrated mob film featuring Chris Penn in his greatest performance). This is a long overdue write-up (which explains why it’s a bit long). If you remember my review of Go-Go Tales from early 2011, Anthology Film Archives did a great retrospective on Abel Ferrara’s work from the last decade, which were films that most Americans had yet to see. I’d say Mary was the best out of the bunch.