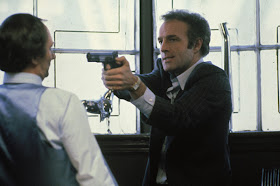 We're giving Claire Denis a break for the next few blog entries and focusing on another Pinnland Empire favorite: Michael Mann (see my recent reviews of 'Ali' and my revamped review of 'Miami Vice'). Everything i read about 'Drive' (my review included) mentions Michael Mann's 'Thief' (a personal favorite of mine). And rightfully so. 'Drive' and 'Thief' have similar plots, vibe, soundtracks as well as very similar opening and closing sequences. Hell...both films even use a similar font in their opening credits (as i noted in my review of 'Drive' last month). Even the main characters in both films have their own specific set of rules that they go by in their criminal activities that are embedded in our minds. With James Caan's character in 'Thief' its; No furs, no coin collections, no stocks certificates, no treasury bonds, no nothin'. Just diamonds and cash. With Ryan Gosling its; you give me a time and a place, I give you a 5 minute window. I don't sit in while you're running it down, I don't carry gun. I drive. And I don't have an issue with Nicholas Winding Refn borrowing from 'Thief' at all. 'Drive' is in my top 3 of 2011. But I'm just a little concerned that a lot of people reading all these reviews of 'Drive' aren't familiar Michael Mann's early crime drama. In 'Thief' James Caan plays a professional ex-con jewel thief/safe cracker ("Frank") who's hired by a big time gangster ("Leo") to do a series of heists. Things go great at first, but when Frank and Leo butt heads over their agreement (Frank made it clear at the beginning he only wanted to do one or two more jobs, but Leo has other plans) he has to save himself and protect his family (his wife, played by Tuesday Weld, and their adopted baby) from Leo and his henchmen. 'Thief' might be Michael Mann at his most gritty (right down to the 12 bit synthesizers used by Tangerine Dream who scored the film). Many older fans of Mann's work who aren't happy with the direction his films have taken in the last decade consider 'Thief' to be one of his best works.
What's so great about this film is that it's a great example of Mann's evolution as a filmmaker. This was his second film (first to be shown in theaters). There's no digital handheld cinematography, no fish eye lens close-up shots of his actor's faces, yet you could see little bits of the Michael Mann we know today slowly peeking its head out.

By now, anyone familiar with Mann's work should know that you're almost always gonna see a few shots of our characters around water and/or beachfront homes (sometimes during sundown or sunset). 'Thief' was his first feature to show this...

In 'Thief' we also saw the birth of 2 other signature Mann shots. Not only does he love to place an actor or an object on the far right or left of the frame with the backdrop of city lights taking up the rest of the image, but he also has a fetish for intentionally out of focus, blurry streetlights...

We also saw the birth of another similar shot that Mann loves to use which is the overlooking of a city from the inside of a building (usually an office building with large windows). This wasn't exactly the case in 'Thief', but in these images below you can see how the shot slowly evolved over the years...

And regardless of the shots in 'Thief' what would eventually become some of Mann's trademarks, there's plenty of other great imagery in 'Thief' that put it ahead of all the other 70's & 80's crime drama's... 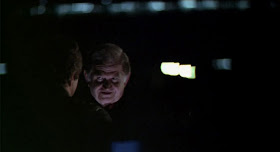 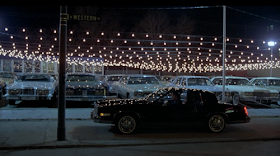 The biggest Mann trademark in 'Thief' is something that doesn't need to be conveyed visually. He loves to explore the idea of making a criminal the "good guy". And if not a good guy, someone the audience will root for. James Caan in 'Thief' isn't that much different from Deniro & Val Kilmer in 'Heat', Tom Cruise in 'Collateral' or Johnny Depp as John Dillinger in 'Public Enemies' (even Gong Li in 'Miami Vice' to a certain extent). In fact, all of these characters are an extension of the characters in the french films that Mann is influenced and inspired by like 'Circle Le Rouge' (and other Melville crime dramas like 'Un Flic'), or 'Rififi' in Thief's case (2 films about anti-hero jewel thieves with tragic endings). Caan's performance is great and his character in the film is pretty interesting. When it comes to his job as a jewel thief, he's one of the best at what he does. He has everything down to a science and is quite meticulous. But outside of his work, he's very naive (almost dumb). At certain points in the film Caan is cool, calm and levelheaded, then at other times he's out of control and a hothead. He's quite believable when he delivers a line like: I am the last guy in the world you wanna fuck with.
And in true Scorsese fashion, Mann loves the idea of showing crooked (or at the very least, imperfect) police. There isn't a single cop character in 'Thief' that's actually a "good guy". They're all crooked. With 'Thief', in addition to Caan fighting Leo and his gangsters, he also has to deal with crooked cops trying to shake him down for money.
This film is an underrated classic. To put it in to an analogy; If other movies in the same vein like 'French Connection' or 'Dirty Harry' are Denrio in his prime, then 'Thief' is like Harvey Kietel in his prime. If you liked 'Drive' i don't see how its possible for someone to not at least appreciate 'Thief'. Drive even shows how 'Thief' was ahead of its time in terms of film score. These days, all anyone talks about is the soundtrack for 'Drive', yet 'Thief' had a very similar soundtrack 3 decades earlier, and many critics felt the music was out of place and didn't fit with the movie (over the time that opinion has changed).
In my opinion, not only is this a great starting point for people curious about Michael Mann, but its also a great film to get someone interested in classic french crime films from the 50's, 60's and 70's.