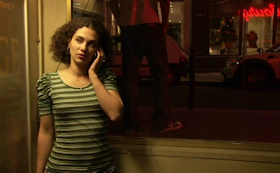 We don't usually get in to short films on here so lets switch things up a bit. In September I got a nice surprise message from another Pinnland Empire favorite: Alice Houri. 'Rech JF' is a short film from 2009 that she starred in about an aspiring actress/movie theater employee who responds to an ad that turns out to be something she wasn't looking for. Even though the video is below, I gave that brief summary because...there are no English subtitles (sorry). But even if you cant speak french (LIKE ME), its still surprisingly easy to follow even if you cant understand what's exactly being said (pretentious, I know, but whatever). I showed 'U.S. Go Home' (another film starring Alice Houri) at my birthday party at Anthology Film Archives this past August without any English subtitles for an all American audience and it turned out surprisingly well, so I'm gonna try it again. Something about the vibe of 'Rech JF' reminds me of 'Variety' (Bette Gordon's no-wave classic that we covered a while back on Pinnland Empire). Naturally this type of story is something any actor (or artist in general for that matter) can identify with and relate too. Although the short is fiction, I'm sure the director drew from real life, as some of the films mentioned in this short are actual movies Alice has acted in like 'The Pornographer' (another film i wrote about on here a few months ago).
Anyway, enjoy the short...