Is it me, or did this movie just kinda disappear REAL quick? It feels like this came out YEARS ago when in fact its barely been 2 years since its release. How is that possible? 'Public Enemies' shoulda been epic. It shoulda been one of the last great films of the decade. Christian Bale and Johnny Depp under the direction of Michael Mann in a film about John Dillinger. How could that have failed? Maybe in 10 years I'll come around like I did with 'Ali', but right now this feels like one of the biggest letdowns in recent years. Have the 'Pirates Of The Carribean' movies become THAT popular and THAT big that it makes people forget about and/or ignore anything Johnny Depp has acted in since 2003? It sure seems that way. In a lot of ways 'Public Enemies' feels like Mann was trying to recreate 'Heat' for this era: Two extremely popular actors at the moment (Deniro/Pacino in the mid 90's & Depp/Bale in this era) face off against each other in an epic crime drama where the lines between who's the "good guy" and who's the "bad guy" are blurred. Lets face it, Michael Mann LOVES to make good guys out of bad guys. We cheered for James Caan in 'Thief' knowing that he was a jewel thief. Everyone thought Tom Cruise was a total "badass" in 'Collateral' when in fact he was the "bad guy". In 'Heat' we found ourselves rooting for Deniro's character (the bank robber) just as much as Pacino (the cop). And the same thing applies with 'Public Enemies'. Michael Mann makes John Dillinger out to be more of a suave robin hood-esque antihero than he does a criminal (although from what I understand, that portrayal of Dillinger is somewhat accurate). There's also subplots in both 'Heat' & 'Public Enemies' involving love interests (the scene in 'Public Enemies' where Marion Cotillard is picked up by the police at the bank is very reminiscent of the scene when the police are trying to set Val Kilmer up with Ashley Judd in 'Heat'). And there are pivotal shootout scenes in both films that draw comparison to one another as well.
But for some reason, 'Public Enemies' didn't have the same vibe as 'Heat'. It actually felt boring at times. I understand focusing on detail, especially in a biopic, but not everything that Mann focused on was needed. Half way through the movie you kinda go; "ok ok, John Dillinger was good at breaking out of Jail. How many prison break scenes is Michael Mann gonna show us?!"
And I'm sure the relationship between John Dillinger and his girlfriend Billie Frechette (Marion Cotillard) was strong, but something tells me it wasn't as passionate as Mann made it out to be. You're telling me at no point that a guy like John Dillinger didn't rough his girlfriend up? Or smack her around? C'mon now...
The cinematography was another major downfall. I've watched 'Public Enemies' numerous times with people (both in the theater and on television) and its always the same complaint: "why does the movie look like that" or "I don't like the camera being used". That famous Michael Mann "look" worked for stuff like 'Miami Vice' and 'Collateral', but it was kind of a mess at times in 'Public Enemies'. Not all the time, but sometimes. Take the motel shootout scene for example. After a while I had no idea who was who, who was shooting at who, who were the good guys or who were the bad guys, I didn't even know if i was looking at Christian Bale or Johnny Depp...

And whats strange is that for a film that goes in and out of looking great to looking like it was shot on the latest camera phone, when you pic out individual stills from 'Public Enemies' and look at them, they look beautiful. Really great images that convey amazing cinematography and lighting just like almost anything else Michael Mann does...

another similar shot of the sky found in other Mann films like 'Miami Vice', 'Ali' and 'Thief' 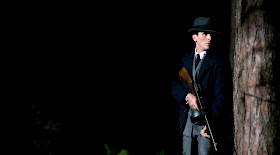 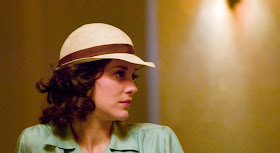 But in between some of those beautiful stills, the cinematography just looks chaotic and disorienting (as you could see in the video above).
And as far as imagery & cinematography are concerned, Michael Mann continues to shoot his signature "close-up" shot of his actors faces, just like he did in 'Miami Vice', 'Collaterl', 'Ali' and 'Heat' with that almost fish eye lens effect... 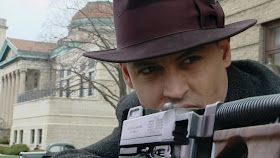 'Public Enemies' (above) Vs. 'Collateral' (below) 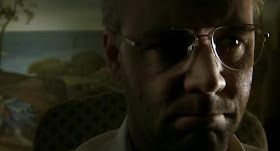 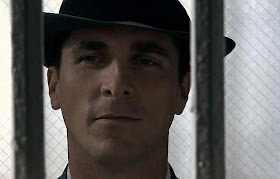 'Public Enemies' is the story of the "cat & mouse" game between notorious gangster John Dillinger (Depp) and FBI Agent Melvin Purvis (Bale). Other portrayals of famous figures include; J Edgar Hoover (Billy Curdup), "Babyface Nelson" (Stephen Graham) and "Pretty Boy Flloyd" (played by Channing Tatum in a short appearance). At BEST, this movie is "meh, ok" (sorry to sound so harsh, but its true). Even before I saw 'Public Enemies' I loved the idea of Johnny Depp playing Dillinger. I guess maybe my one complaint was that Christian Bale's presence wasn't very memorable. Its almost like anyone couldve played his part and you wouldn't have noticed the difference. There were other  distractions as well. Don't get me wrong, the supporting cast was great, but at the same time he had SO many recognizable actors in bit parts & extended cameos that it threw me off. People like Lili Taylor, James Russo, Stephen Dorff, Giovanni Ribisi, Leile Sobieski, etc. Their characters would be introduced, they'd have about 5 minutes of screen time, and then you'd never see 'em again. A new character gets introduced so often you start going; "wait, who is that again and whats his or her purpose in the story?"
Maybe I just prefer Michael Mann's films to be set in the present day. After all, I'm not too crazy about his other 2 films that take place "back in the day" ('The Last Of The Mohicans' and 'The Keep'). In a film that's set in the 1930's you cant get a lot of the same Michael Mann-esque imagery that we saw in 'Heat' or 'Collateral'. Mann didn't have any nighttime city landscapes too shoot or scenes set around water or beachfront property like half of his work. No images of modern architecture, city landscapes or cars speeding on the freeways. I hope what I'm about to say makes sense and doesn't sound like I'm reaching, but Mann's digital filming style is so modern and up to date that even when you watch a film like 'Public Enemies' that takes place in the 1930's, you cant help but think about all the new technology and modern "look" of his films that it subconsciously makes us think of the present day. 'Public Enemies' doesn't really feel like its set in the 1930's all the time.
I know I'm typing a lot and expressing a lot of passionate opinions, but I love Michael Mann and I feel like we missed out on what coulda been a really great film. 'Public Enemies' could have been this generation's 'Untouchables' when you think about it. All the pieces were there but everything seemed flat. How is it possible to make a borderline boring movie about the life of John Dillinger?
This past decade has been a strange one for man. 'Ali' and 'Collateral' seem to be loved by most people, but his last 2 films left people scratching their heads. In 2011 I STILL cant convince people that 'Miami Vice' is actually a very good movie and 'Public Enemies' kinda failed with critics, fans and at the box office. I hope his next film (which is supposed to be a period piece staring Andrew Garfield) can redeem him. In the meantime we got quite a few filmmakers using his style to make names for themselves (Christopher Nolan and Nicolas Winding Refn to be exact) so I guess that will have to do for now.