Like 'Ghost Dog', 'Solaris' (2002) and countless other underrated movies that came out in my late teens/early 20's, I used to dislike 'Ali' (well maybe not dislike, but i wasn't crazy about it). I remember back in the myspace blog days, Pinksmoke writer John Cribbs included Mann's 2001 biopic on his list of "25 best films of the decade so far" which is pretty much what prompted me to give it a 2nd chance. There's still a few nitpicky flaws that get to me, but at the end of the day my stance on 'Ali' has definitely changed. I admit that when I saw Ali upon its initial release I didn't have the same appreciation for Michael Mann's visual style that I have now. Maybe it's a maturity thing, but it wasn't until a few years ago that I realized how much I loved his movies and overall visual style. I always liked 'Thief' and 'Heat' but I never attributed my love of those movies to Michael Mann's unique style. Even his stuff that I'm still not crazy about like 'Collateral' & 'Public Enemies' still has that particular look that I appreciate. What is it about Mann's style that makes a shot of blurry street lights or a close-up of the side of someones face look so great? Its like listening to atmospheric music with no lyrics. When you really get down to it - there's no scientific explanation as to why that kind of music touches someone. It's an indescribable thing just like the strange beauty in these borderline experimental Mann shots... 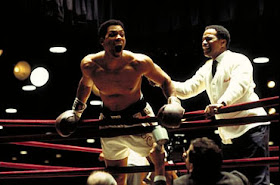 The timeline of 'Ali' spans from his first bout with Sonny Liston (another boxer whose story would make an amazing biopic if done right) up through "The Rumble In The Jungle" with George Foreman. Like many classic boxing movies ('Raging Bull' & 'Rocky') what makes 'Ali' great is what the director focuses on outside of the ring as well as inside. In between those 2 historic matches (Liston & Foreman), Mann touches on Ali's relationships with the Nation Of Islam & Malcolm X, his romantic relationships, his refusal to fight in the Vietnam War (which led to him being stripped of his heavyweight title) and his unique relationship with Howard Cosell (played by John Voight). What made 'Raging Bull' standout among all the other boxing movies was Scorsese's focus on Jake Lamotta's legal troubles, his love life and his rocky relationship with his brother.

At the end of the day Will Smith did a wonderful job, but, and I know some of you are going to want to crucify me for saying this, it would've been interesting to see an unknown actor play the part. Sorry, but we're running out of (good) young/young-ish black actors in America. Will Smith, Jefferey Wright, Don Cheadle & Terrence Howard are in their 40's and Denzel Washington is in his mid-50's. I seriously think one of the main reasons that so many biopics on important black figures like Stokley Carmichael and Angela Davis haven't come out is because the movie industry, both mainstream & indie, doesn't know how to break new young black (film) actors. They always look at who is current, available or relevant when it comes time to play a part. Rarely do you see a young black actor or actress "made" or "discovered" in the same vein as a Chris Hemsworth (Thor) or Sam Worthington (Clash Of The Titans, Avatar). The unknown lead actor surrounded by a supporting cast of well-known/established actors is a formula that needs to be explored more
The performances that did make me a believer came from the supporting cast. In the last decade Michael Mann has gathered together some great supporting players in his films. With 'Miami Vice' he had Justin Theroux, Eddie Marsan and Isaach Debankole. In 'Public Enemies' he got Giovanni Ribisi, Billy Curdup (who, in my opinion, did a great job as J Edgar Hoover), Stephen Graham and Carey Mulligan. In 'Ali', among the supporting cast of John Voight, Jada Pinkett, Jeffery Wright, Ron Silver, Ted Levine (in an uncredited role) and Giancarlo Espisito (who for whatever reason was cast as Muhammad Ali's father, even though he's only 9 years older than Will Smith) the standout performance came from Jaime Foxx as Drew Bundini. Just imagine if the title role of Ali was played by an "unknown"/newcomer with a remaining cast of well known supporting actors like John Voight, Jeffery Wright and Jaime Foxx? Something to think about. Just Sayin'...


I think one reason a lot of people doubted that Mann could pull this film off was because when you're dealing with an iconic figure like Muhammad Ali, you're dealing with a lot more than just a boxer. He was an iconic figure among black people. It seems like ever since 'Malcolm X', Spike Lee is the only choice to direct any important story concerning black people. But what some of you fail to realize (and forgive me for saying what I'm about to say) is this would have been a post-2000/'Bamboozled' Spike Lee film, which means there's a strong chance Lee's version of 'Ali' would've been a big disappointment like so many other films he's done in the last decade. Sorry, but I'd rather watch 'Girl 6' twice in a row on repeat then watch 'She Hate Me' again. And 'Miracle at St. Anna' was a ploy to win over fans that didn't like Spike Lee. He figured making a war movie would put him in the good graces of America, but his mouth got him in trouble during promotion for the film (he criticized Clint Eastwood's recent war film ' Flags Of Our Fathers' and that didn't sit well with white Americans).

Spike Lee was definitely sour about not being picked to direct 'Ali'. Between the pre-production and release of Ali, he had the following things to say...

I would say I do know more about white culture than Michael Mann knows about black culture, and I will say Ali was indicative of that (OUCH!)


I wanted to do it, but Will didn't want me to direct it


Few white directors can get our stuff right. Ali didn't get it. I'm tired of other people documenting our history.

Rumor has it that Will Smith didn't want Spike Lee to direct 'Ali' because of his harsh (and just) criticism of 'The Legend Of Bagger Vance'.

Besides Spike Lee, what other black directors at the time could have made this film? By 2000/2001 John Singleton was on his way to selling out (and he hasn't stopped since), Robert Townsend fell in to direct-to-video obscurity, Mario Van Peeples (who ironically co-starred in 'Ali') failed to do the Black Panthers' story justice, so I wouldn't want him anywhere near the Muhammad Ali story, and his father Melvin was (and still is) enjoying his cult status in Europe. This kind of a project would have been too big for Matty Rich, Wendall B Harris had fallen in to obscurity as well, Steve Mcqueen ('Hunger' & 'Shame') hadn't started directing feature films yet and I don't see the Hudlin Brothers pulling this one off either ('House Party' is one thing, but I don't about 'Ali'). Charles Burnett would have been an interesting choice with the right budget, but lets be honest...a name like Charles Burnett doesn't hold the same weight as Michael Mann. And just because a prominent black director can't make a film about a prominent black figure doesn't mean the movie should just be scrapped. It's not like Brett Ratner directed 'Ali'. Michael Mann is one of the last studio directors working today that actually has style. Naturally people are always going to be skeptical about a white director dealing with important issues concerning Black America (especially during the 60's & 70's), but Mann did a great job if you ask me (the first 10 minutes of 'Ali' showed a lot of unspoken racial tension). And lets not forget that Norman Jewison directed 'A Soldiers Story', Jim Jarmusch directed 'Ghost Dog' and Spielberg did direct 'The Color Purple'. So every once in a while a white director can do a black story justice. The only criticism I have towards Mann's focus on black issues in 'Ali' was the Malcolm X angle. It just seemed to go on for too long and it took away from Muhammad Ali's story. For the first 40 minutes of the movie, 'Ali' almost feels like a joint biopic of both X and Ali. Many people don't realize this, but Spike Lee was the THIRD director chosen to direct 'Malcolm X'. First it was Norman Jewison, then it was Michael Mann and finally Spike Lee got the job. Something tells me Mann's elongated focus on Malcolm X in 'Ali' was kind of a shot at Spike Lee (Mann actually went so far as to re-shoot the scene of Malcolm X's death the way it actually happened). And not only that - Mann even got two actors who co-starred in 'Malcolm X' to appear in 'Ali' (Giancarlo Espisito and Al Freeman).

I highly recommend giving this another chance (for those of you who weren't crazy about it 10 years ago like i was) or actually give it a FIRST chance to begin with (for those blind Spike Lee fans who have actually never seen the movie but still judge it). 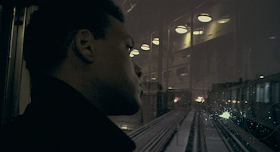