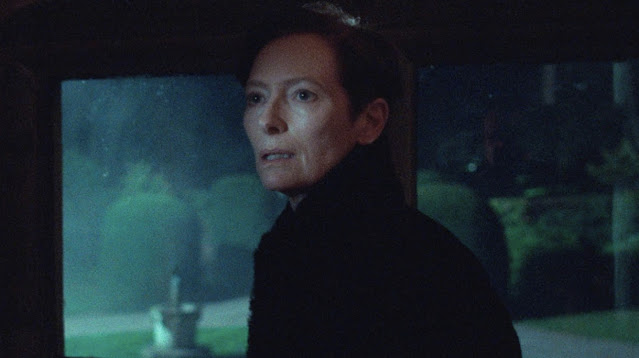 *MILD SPOILERS*
Movies like The Eternal Daughter always fascinate me because while it is a masterful film (Joanna Hogg does an amazing job of mixing awkward humor & personal grief) - it’s really only made for a specific group of people. Not that there isn’t a market for small intimate arthouse films, but this is part of a series of films that you’d have to be familiar with in order to appreciate the entire saga (this might be my favorite movie of 2022 but I wouldn't blindly recommend it just anyone). I guess The Eternal Daughter can be enjoyed by anyone on a surface level. Who doesn’t love a simple yet beautifully executed ghost story? But if you’ve been invested in Hogg’s last few films (The Souvenir & The Souvenir II) then you’re part of that aforementioned group I’m talking about. This one is for us...
In this latest installment in the “Souvenir Cinematic Universe”, Joanna Hogg takes some of the characters from her previous two films and places them in a haunted hotel 30+ years or so after the events of the first two films. Julia is now an established filmmaker working on her latest project all while trying to take care of her widowed mother. The ongoing 35 year working relationship between Joanna Hogg & Tilda Swinton has always been very meta and The Eternal Daughter is no exception.  Not only does Swinton play both Julia (a cinematic alter-ego of Hogg herself) & her mother, but she takes over the role that her real life daughter played in the previous two chapters.
There’s a lot of pushback against "cinematic universes" these days because Marvel has cornered the market on sequels, prequels & offshoots. There is some understandable fatigue towards superhero/comic book-based films. Marvel's impact on movie franchises is undeniable at this point (Lord Of The Rings, Game Of Thrones, DCU, etc etc). But the world of “arthouse” cinema has been doing this decades before the MCU was even a thought. Everyone from Francois Truffaut to Leos Carax have been crafting their own cinematic universes for decades. Claire Denis’ Beau Travail is a loose continuation of Godard’s Le Petite Soldat. Bruno Dumont has been making nothing but sequels & prequels for the last decade. I’m all for endless sequels & continuations if it brings on more movies like The Souvenir & The Eternal Daughter (it should be noted that Tilda Swinton carries the honor of being the only actress to exist in both the Marvel cinematic universe and the Souvenir cinematic universe).

One film was Jacques Tourneur’s Night Of The Demon which is really atmospheric - Joanna Hogg, Rogerebert.com
The Eternal Daughter is bound to draw some obvious comparisons to The Shining (what modern film set in a haunted hotel with long unbroken shots of hallways isn’t?).
Those comparisons would be fair, but given Hogg’s deep love of Chantal Akerman, I’d say The Eternal Daughter borrows more from Hotel Monterey.

The influence is already all over the previous Souvenir films…

I sometimes wonder if Akerman rubbed off on Kubrick in some subconscious way. There aren’t any ghosts in Hotel Monterey but there are some eerie moments that predate some of the imagery in The Shining…

The Eternal Daughter would be a nice ending to the Souvenir cinematic universe but I said the same thing about the Souvenir II and here we are with a new brilliant surprise chapter. Part of me feels like as long as Joanna Hogg is alive, there will always be the possibility of a new installment and I am totally fine with that.
Marcus at 3:01 AM
Share
‹
›
Home
View web version