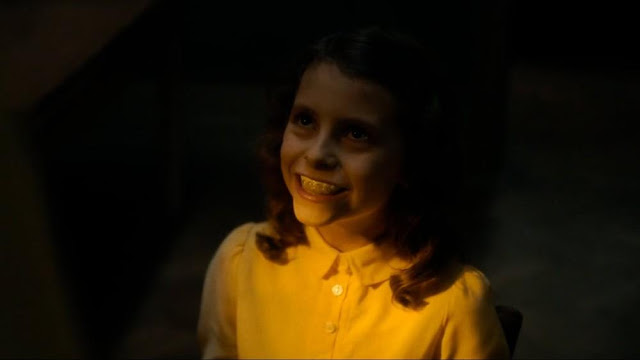 Earwig might be Lucile Hadžihalilović’s darkest film. Both in subject matter (a young girl is kept inside of a house and isn’t allowed to leave) and the look (a large majority of the film is darkly lit and just all around murky). And that’s saying something because her previous films aren’t exactly “light” or easy to digest. I think because Innocence (2004) & Evolution (2015) look so beautiful and feature mostly children, we don’t immediately register how heavy those films are. Earwig takes the heaviness from her previous films and adds some additional weight (Hadžihalilović continues her trend of working with mostly child actors as well).
Instead of opening shots of a beautiful forest (Innocence) or the ocean (Evolution), Hadžihalilović throws the audience head-first in to a musty room as a fly on the wall to observe our tortured caretaker (“Albert”) who’s job is to look after a young girl (“Mia”) with teeth made of ice (ice made out of dentures Albert makes from the saliva Mia produces). Their world is eventually interrupted when Albert is forced to finally let Mia outside of her confines.


The surrealism of Earwig is very subdued and matter-of-factly. This makes things all the more disorienting because you kind of forget you’re watching this almost realistic approach to this dark fairytale about a creepy little girl with teeth made of ice.


This is something that will definitely be referred to as "Lynchian" by lazy journalists. While Hadžihalilović herself has admitted in the past to being influenced by Lynch:

I was influenced by Cronenberg and Lynch, because at school, when I was 20, I grew up with their films - Lucile Hadžihalilović, Film Comment

She’s even referenced specific moments from specific Lynch films that influenced her...
What a hyper-moving performance from Jack Nance, playing Henry Spencer as he struggles with a terrifying, inhuman, yet touching baby. The film created mysteries and a fascination that remains intact after almost half of a century - Lucile Hadžihalilović, Vice
...Earwig is in no way “Lynchian” which has now become the default stock description that everyone uses to describe something mildly “weird”...

To my surprise, the real (cinematic) influence on Earwig is Chantal Akerman’s tediously paced Jeanne Dielman.
One was JEANNE DIELMAN (1975), the Chantal Akerman film, because of all these ordinary actions that Delphine Seyrig carries out in the film and that our protagonist, Albert, also carries out - Lucile Hadžihalilović, BFI

It makes a lot of sense when you compare certain specific moments between the two films:

The emphasis of dentures and fucked up teeth felt like a callback to Francis Dolarhyde in Manhunter:

The Embryo Hunts In Secret was another point of reference/inspiration for Earwig...
The other one was The Embryo Hunts in Secret (1966) by Koji Wakamatsu. It’s a Japanese film from the 60s about a man who kidnaps a woman and keeps her in an empty apartment with no furniture - Lucile Hadžihalilović, BFI

A possible nod to Nicolas Roeg?
I enjoyed Earwig and I appreciate Lucile Hadžihalilović taking a more traditional approach to the horror/psychological horror genre all while still maintaining her genuinely weird style. Earwig feels like what all those A24/Neon horror films try to do but just end up coming off very surface & heavy-handedly. Unlike a lot of today's horror filmmakers, Hadžihalilović makes it very clear here that she isn't concerned about making a ton of sense (this is a warning for folks who are looking for something totally traditional). She's more focused about creating a feeling. Even with all of her (minor) cinematic influences, not many people are making movies like Hadžihalilović.
I don’t think this is as strong as her previous works but Innocence & Evolution are almost “perfect” as far as I’m concerned. She’s allowed to make an “8 out of 10” which isn’t too shabby.
Marcus at 3:01 AM
Share
‹
›
Home
View web version