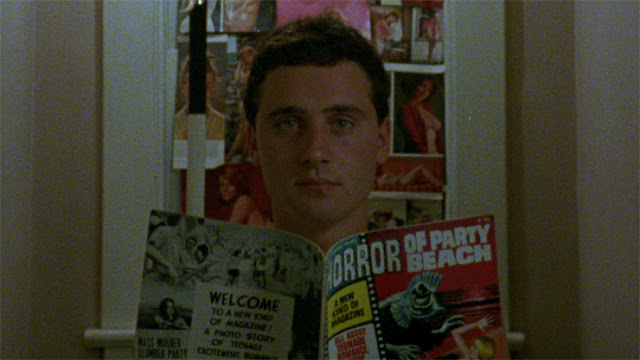 John Paizs' Crime Wave (not to be confused with Sam Raimi’s Crimewave which came out around the same time) is an amazing mix of surreal humor and the deconstruction of 1950s/1960s nostalgia (noir films, pulpy crime novels, Norman Rockwell paintings, etc). It’s like an entire season of Leave It To Beaver under the creative control of Kenneth Anger. And if that doesn’t work for you, imagine a cinematic stew of everything from David Lynch & The Coen Brothers to True Stories (The Talking Heads) & the dark side of Elvis Presley’s personal life.
For those of you that are unfamiliar or visiting PINNLAND EMPIRE for the first time - I’m very much in to cinematic comparisons (both intentional & unintentional) and visual similarities. Crime Wave is all of those things and more so I was very drawn to this
John Paizs doesn’t shy away from the possibility that he may (or may not be) influential in some way...

The Coen brothers...they were sent CRIME WAVE very early on by my distributors to see if they might have any suggestions for a recut of the film or whatever - John Paizs
What I do know is that about five years after, they came out with their own postmodern writer’s block dark comedy, which even had its own made-up movie genre, the wrestling picture. And of course I’m talking about BARTON FINK - John Paizs
The basic plot of Crime Wave centers around an author (Steve) in the midst of a serious writer’s block (he only gets inspiration late at night when the street light outside his room comes on). The majority of the story is told from the perspective of a young girl (Kim) whose parents rent a room to Steve while he figures out his next book idea (Kim is both very observant and also has a huge schoolgirl crush on Steve).
But the basic premise doesn’t do the film justice. There’s a serial killer dressed up as Elvis, a horny sadistic cowboy and interludes that come right out of Ren & Stimpy. Crime Wave feels like a footnote in the development of early 90’s Nickelodeon programming (Pete & Pete, Are You Afraid Of The Dark, Ren & Stimpy, Rocco’s Modern Life, etc) or modern day Cartoon Network Adult Swim programming (Tim & Eric, The Shivering Truth, Joe Pera, Eric Andre, The Heart She Holler, etc). I think that’s what fascinates me most about this film. It’s filled with a ton of influences and it also went on to (possibly) influence later films in the same lane.

I came across this movie while I was in the middle of a serious Guy Maddin phase. Maddin has always been one of my favorite modern filmmakers but it only hit me recently how much I love his work. Reading everything I could about his early career eventually lead me to his fellow Winnipeg contemporary; John Paizs.

A young Guy Maddin appears in a few of Paizs’ early short films...

Maddin often shouts out Paizs in interviews so it only made sense to check out his films (Crime Wave is currently streaming on Amazon Prime and his excellent short film; The International Style is on YouTube). Turns out, I was familiar with Paizs’ work without even realizing it. He not only directed episodes of Kids In The Hall, but he also directed the 1999 sci-fi satire Top Of The Food Chain which I’d seen once over two decades ago as a teenager. That’s when it all clicked. Everything suddenly made sense. The same satirical approach in Top Of The Food Chain can be found in Crime Wave. The same voice-over narration (courtesy of a young girl) found in some of the skits in The Kids In The Hall sketches are rooted in Crime Wave...

The “It’s a fact girl” had to have been influenced by Kim in some way...
Steve’s fascination with the radiator in John Paizs’ Crime Wave (below) reminded me of Eraserhead (top), then I came to find out Eraserhead’s tone was kind of an inspiration for Crime Wave...
I’d always imagined that this would play at a midnight movie, kind of a cult movie and that this needed special handling. It needed to be directed at the same audiences that were going to see, for example, Lynch’s Eraserhead. That wasn’t part of the market that they had experience - John Paizs

This branches off in to more possible Lynch connections with stuff like the cowboy in Mulholland Drive...

The similarities between Crime Wave and David Byrne’s True Stories are also undeniable...

I’m also reading from multiple sources about how much Paizs loved Kenneth Anger and how he inspired some of his work. It definitely shows... 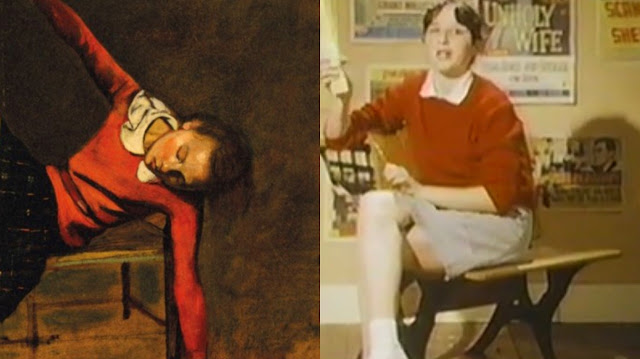 Other possible darker visual influences can be traced back to everything from Friedkin’s Cruising to the frustrated writer in The Shining...

I feel like this movie (along with everything else in Paizs’ filmography) was made specifically for me. I still can’t believe it took me this long to see Crime Wave but I guess it’s better later than never.
I do have to shoutout my friend David Davidson of Toronto Film Review who tried his best to get me to watch Crime Wave for the last 6 years... 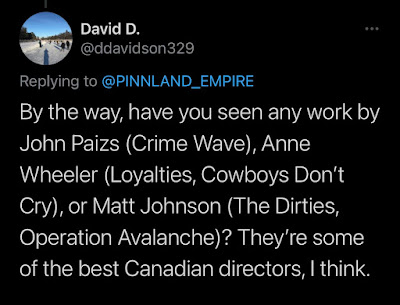 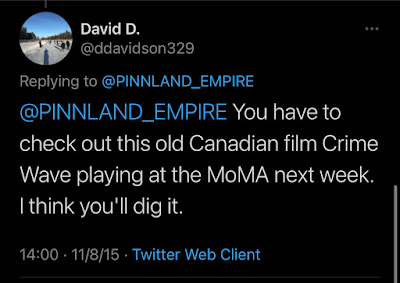