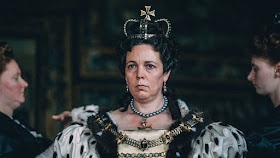 This one is a unique creature. In my personal opinion, The Favourite doesn’t even crack Yorgos Lanthimos’ top five (which means it ranks “last” within his filmography considering he’s only made six features).

On a side note - this ranking kind of speaks highly to Lanthimos’ barely seen debut; Kinetta. I mean - so few people saw it that Lanthimos was able to get away with remaking it (with a few tweaks) in the form of Alps (both movies deal with service workers recreating/reliving the memories of other people).

The Favourite is heavily influenced by Barry Lyndon which I've never been to crazy about (Yorgos Lanthimos appeared on an episode of Marc Maron's podcast and mentioned Kubrick's Barry Lyndon a few times). But I find it interesting & intriguing that one of my favorite recent filmmakers (Lanthimos) drew inspiration from a movie I'm not crazy about (I know I'm in the minority on that) and made me enjoy & appreciate it more. This may ruffle some feathers but I think The Favourite is the only way I can really enjoy Barry Lyndon (this review isn't about Kubrick's mostly critically acclaimed masterpiece - and it's been said already - but Barry Lyndon comes off as a very boring movie made by a bored person at the time. Sorry...)

At this point in my life a Kubrick influenced movie isn't a huge "draw" for me. Don't get me wrong - Kubrick is a master and probably one of my favorite filmmakers (on a very long list), but what major/critically acclaimed movie isn't influenced by him at this point (even movies that don't draw from Kubrick are still compared to his work). I'm also pretty lukewarm on films from the main culprits of the school of Kubrick (Christopher Nolan, Paul Thomas Anderson and every other Shining-influenced horror movie or 2001-influenced space movie with a few exception here & there).
I expect filmmakers like Christopher Nolan to draw from Kubrick. Not Yorgos Lanthimos. He's someone I've never associated with Stanley Kubrick. Until The Favourite he was a student of folks like Bresson (Alps), Haneke (Sacred Deer) and even a pinch off Todd Solondz (Dogtooth). And before that - he was self-admittedly inspired by films like Flash Dance & Rocky which are both referenced in Dogtooth.
A Kubrick-inspired Yorgos Lanthimos movie felt like a breath of fresh air (even if Barry Lyndon is the point of reference). While it isn't on the level of a Dogtooth or Sacred, The Favourite is still something different for him. There's no (outright) Bresson-ian deadpan performances or Haneke-esque darkness. And I might be ruffling some more feathers or triggering some so-called film purists but The Favourite has a soul that Barry Lyndon doesn't.


Now...Barry Lyndon isn't the only movie to influence elements of The Favourite. Yorgos Lanthimos has mentioned the work of Peter Greenaway as a major inspiration. Specifically The Draughtman's Contract...


There are also shades of everything from Persona

Set in early 18th-century England, the story focuses on the relationship between two cousins (Sarah Churchill & Abigail Masham) vying for the attention of the mentally unstable Queen Anne (Lanthimos based a lot of The Favourite on his own speculations and letters written to/from Queen Anne & Churchill).
If anything, The Favourite serves as an example of an “arthouse”/left-field director turning the corner in to a slightly more mainstream lane without compromising their style too much (there is some compromising in my opinion as the dark humor is somewhat toned down in comparison to his other movies). The Favourite doesn’t have dialogue about jerking off your dad (The Killing Of A Sacred Deer) or “rape humor” (The Lobster), but the humor in The Favourite is still darkly comical and somewhat fucked up (the way the man-boys in The Favourite treat the women is fucked up, funny, and serves as some obvious commentary on gender dynamics that we’re still dealing with today and probably always will).

Lanthimos’ transition has been an interesting decade-long observation. Dogtooth (2009) came out of nowhere and earned an Oscar nomination. The Lobster (2015) not only gained Lanthimos a second Oscar nomination, but this was his first English-speaking film with recognizable folks like John C Reilly, Rachel Weisz & Colin Farrell who, in my opinion, captured that Bresson-ian acting style that Lanthimos loves so much. That acting style was kind of abandoned in The Favourite so I understand why some Lanthimos fans didn't place this movie on the same pedestal as Dogtooth & Sacred Deer. It’s also difficult to follow something like The Killing Of A Sacred (probably one of the best films of the decade). As much as I enjoyed The Favourite it’s still "safe" when compared to Lanthimos' earlier work. But I’m honestly not mad at Yorgos for playing it safe. It’s kind of like the arthouse/auteur version of fast food which - like fast food - is fine every once in a while (plus his short film work that followed The Favourite was a return to form so we know he didn't abandon what makes him so great). I'm also not mad at The Favourite for putting Lanthimos on a more accessible level...