THE SCHOOL OF PERSONA: PORTRAIT OF A LADY ON FIRE

I'ts no mystery that Celine Sciamma's Portrait Of A Lady On Fire is heavily influenced by Bergman's Persona. Once the trailer dropped last year everyone was quick to note that one striking visual comparison shown above.

But Bergman's visual (and sometimes thematic) DNA goes a little deeper than just one simple comparison.

More than a decade before Portrait Of A Lady On Fire became a minor crossover arthouse "hit", Sciamma had proven to be a student from the school of Bergman with her previous three features...

In a sense, Portrait Of A Lady On Fire is one big visual homage to Bergman's Persona along with some minor thematic nods as well. Both minimally cast films are set on isolated locations. And while Lady On Fire deals with lesbian romance more directly, there's no denying that Bergman flirts with that in Persona as well).

Given Sciamma's quick nods to Bergman all throughout her career, it's almost like this was the film she'd been working towards up to now. As you'll see below, the visual similarities and synced up moments go beyond the basic imagery of overlapping faces that we saw at the top of this entry... 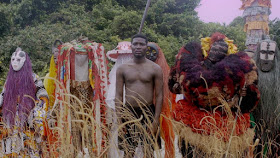 Placing The Lost Okoroshi under the “Nollywood” genre feels like an oversimplification (much like how critics compare anything slightly weird to David Lynch ). Don’t get me wrong – Nollywood films & filmmakers definitely crawled (and walked) so Abba Makama could run, but his latest kind of transcends that genre in my opinion. This is a movie that deals with everything from the cultural & spiritual importance of African art & folklore, to faith & spirituality. AND – if you’re lucky enough to see it in theaters – this might possibly be the most fun you’ll have at the movies all year. I absolutely stand by that. While The Lost Okoroshi deals with the aforementioned elements like spirituality, African folklore and the preservation of culture, it’s also a very random & very funny movie which is right up my alley. Whether you’re in to classic late night adult swim programming or the underrated comedies of Robert Townsend – there’s something in this movie for everyone. In fact – The Lost Okoroshi has a lot in common with the early films of Robert Townsend as it's about a regular man-turned-superhero who uses his powers to try and clean up his own community from Pimps & crime lords (pretty much the plot of Townsend’s Meteor Man). Both movies mix comedy, campiness, social consciousness & drama in the same fashion…


In the film we follow “Raymond” – a security guard haunted by intense visions/borderline nightmares that eventually consume him and transform him in to the folk superhero; “The Lost Okoroshi”. Once transformed, he uses his mystical powers to save prostitutes, re-distribute wealth in to his community and put an end to corruption. While this sounds like a standard superhero origin story (and it kind of is), The Lost Okoroshi sets itself apart from the Luke Cage’s & Black Panther’s because the Black pride and African culture explored in the movie isn’t just “surface” (no disrespect to the predominately Black Marvel superheroes but there’s only so much true “Blackness” the Marvel/Disney corporation will show).

On a side note – someone should really do research on the influence that this final shot in Black Girl has had on just about all of African cinema. Much like how certain specific images from Bergman’s Persona or the floating characters in the films of Tarkovsky have had on typical “art house’ imagery, I honestly think the mask scene in Black Girl has not only influenced most prominent African films, but certain specific African American films as well…

Between The Lost Okoroshi and its predecessor Green White Green, Abba Makama is the kind of filmmaker that I want to cross over to larger audiences, but at the same time I don’t want his style compromised or messed with from outside influences. He has a formula that works and would be a nice breath of fresh air injected in to a lot of today’s film scenes. Not to take anything away from Ryan Coogler & Black Panther (I enjoyed Black Panther very much) but if you’re looking for an alternative to big loud Marvel superhero action films – The Lost Okoroshi just might fill that void. I don’t even think Makama should necessarily be given the biggest budgets in the world like Coogler (he should be given all the resources which is different than budget). Let him keep his formula but give him the push he deserves. 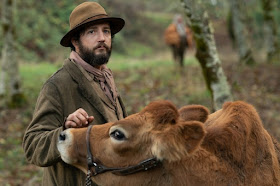 Kelly Reichardt has made one of the better buddy crime dramedies in recent years (the film hasn’t really been marketed as such but I assure you that First Cow is absolutely a partners-in-crime story that’s also about class, chance encounters and the importance of friendship). Anyone familiar with me, my taste & this blog should know that I am pretty biased towards Reichardt's filmography. So in order to show that my enjoyment of this movie was genuine, let me start this review by saying that – in my personal opinion – First Cow takes a while to get to something. 30 minutes to be exact (I'm pointing out some of the mildly negative qualities to show I'm not completely  biased). Normally I don’t mind movies taking their time (especially in the case of Kelly Reichardt). But unlike Old Joy, Certain Women, Wendy & Lucy and the rest of her work, I found myself drifting off and losing my patience in the beginning of First Cow. But the thing is - we need those first 30 minutes in order to establish some important seeds that grow and show up later in the movie.
I was also a little pessimistic because Reichardt's latest kind of travels down the same lane as Meek’s Cuttoff which is my least favorite Reichardt film (I know I’m in the minority on that one because most folks seem to think that's her best film).
Once the movie picks up speed it becomes an excellent story that mixes comedy, drama and elements concerning the "haves" versus the "have-nots" (First Cow fits right alongside recent films like Parasite & Slack Bay). The story concerns two former gold prospectors ("Cookie" & "King") who come up with a somewhat risky hustle to make some quick cash. Like most stories concerning criminals – things go great at first but after they get too comfortable with their minor criminal exploits, they get sloppy and things eventually fall apart...


Kelly Reichardt (a woman) understands men to a certain degree in a way some other filmmakers don't. I know that may sound like a basic compliment/requirement but some filmmakers don’t really get the opposite sex they're exploring. It goes without saying – and there are tons of examples – but quite a few male filmmakers don’t understand women (history has shown us this). And it works both ways. Not all women understand men. Any rational person would/should agree with that. While we are equal at the end of the day, men and women are still different. Especially when it comes to same same-sex friendships. I find it fascinating how well Kelly Reichardt gets & understands male friendships (this is her second mostly all-male film after Old Joy which shares some of the same basic skeletal similarities as it pertains to male bonding & male closeness). Kelly Reichardt’s female-driven exploration of male bonding is kind of reminiscent of Claire Denis’s male driven work like Beau Travail or 35 Shots Of Rum. 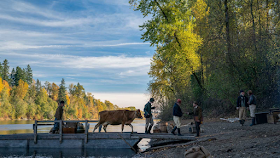 First Cow isn’t the typical male bonding story between “tough guys” or alpha males trying to establish dominance between each other. Neither Cookie or King are tough alpha males (in fact, Cookie is quite passive & submissive while King is a sneaky and a little secretive). They're both kind of wimpy (and a little cowardly). But they're likeable wimps.
They're also smart (until they aren’t). At the end of the day their joint hustle is meant to make as much money as possible so they can have a better life, but they’re also fully aware of the dynamics and the social structure around them. They’re poor and the person they are stealing from in order to run/fund their business/hustle is rich. Midway in to the movie there are lines of dialogue that seem to suggest they’re taking a little bit of pleasure in stealing from the rich establishment that has its foot on their neck.
This angle is another reason why I appreciate First Cow so much. I almost hate what I’m about to sat but - now more than ever, most films seem to be a response to the current climate surrounding us (Donald Trump, race, the imbalance of wealth, etc). And even when they aren’t – a lot of critics force movies to represent something that they don’t (everything isn't a response to Donald Trump or #MeToo). Instead of being completely on the nose and obvious with her politics & beliefs, Kelly Reichardt relies on her ability to convey subtlety. Certain elements within First Cow relate to today but that’s not the point of the movie.

Obviously First Cow wont get the same kind of release as other bigger studio films but if it opens near you I encourage you all to seek this out as it could easily get swallowed up and forgotten about in the early part of the year. It also doesn't hurt to support a sometimes unsung veteran female filmmaker who helped to carve a path for others to follow after her. I’ve come to the conclusion that when audiences complain about the lack of female-driven films, they really just want carbon copies of Patty Jenkins, Ava Duvernay & Greta Gerwig and nothing outside of those wheelhouses. Reichardt has been making films for close to three decades and her 2016 film, Certain Women, broke a personal box-office best for her and I saw little to no celebration for that.
I don't mean to dismiss the Wonder Womans & Captain Marvels but there has to be room The Certain Womens & First Cows as well.