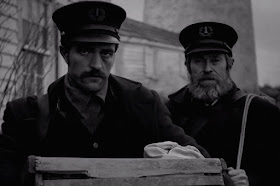 Much like its predecessor (The Witch), the scary aspects of The Lighthouse are in the ambiance & overall tone of the movie. The traditional horror tropes like “monsters”, creatures and jump-scares are secondary. In my personal opinion - this is a movie about the horrors of loneliness & isolation more than anything else. I’m not saying this like it’s a revelation. If you’ve seen the trailer or know any basic thing about The Lighthouse I’m sure you could’ve grasped that on your own. This is a movie with primarily two characters in the form of “Tom” (Willem Dafoe) & “Winslow” (Robert Pattinson). Another important character (or two) does make an appearance but it’s Dafoe & Pattinson who carry the movie. So it should go without saying that chemistry between the two main actors is key in order for a movie like this to be a success and they certainly have it here. They play off of each other exceptionally well.

In Robert Eggers’ latest we follow two lighthouse workers, one a veteran (Tom/Dafoe), the other a younger novice (Winslow/Pattinson), and their slow ascension in to insanity as they battle extreme cabin fever and the possibility of being stranded on an island during a severe storm. There are a few jumpy moments but it’s their handling or boredom that really drew me in. What some people my consider to be slow & tedious pacing, I like to think is Robert Eggers showing the grueling side of being lost and having nothing to do.
And for a movie that’s mostly “heavy” & pretty serious, there’s a good amount of humor (mostly on Dafoe’s part).

Intentionally or not, Robert Eggers draws inspiration from folks like Charles Laughton (Night Of The Hunter)...

...to lesser-mentioned yet still highly influential filmmakers like Jean Epstein...

And while I don’t have any visual examples, Eggers also comes off like a student of Murnau & Dreyer. I hope I’m not overstepping here but certain moments of The Lighthouse look like they take place in the same universe as Vampyr or even Nosferatu. Relax- I’m not saying Robert Eggers is on the same level as Carl Theodor Dreyer or FW Murnau, but he is definitely a student. The very opening shot of Dafoe & Pattinson coming to shore on their boat is reminiscent of the grim reaper sailing in at the beginning of Dreyer’s Vampyr.


I don’t mean to hype up Robert Eggers too much (young 20-something year old cinephiles do that enough on twitter as it is, plus the fact that The Lighthouse is under the A24 umbrella just heightens the hype even more), but this is really impressive for a second feature. I’d even go so far as to say Eggers directs like he’s on his sixth or seventh film.

It’s obviously too early to say where The Lighthouse “ranks” on my list of 2019 movies (it’s barely been 24 hours) but it’s definitely in the top half and something I not only recommend but plan to revisit myself once it hits theaters.
Marcus at 3:01 AM
Share
‹
›
Home
View web version