A FEW WORDS ON VELVET BUZZSAW

And if none of that convinces you, both films feature John Malkovich playing an aging disgruntled modern artists…

If you can't see the blaring similarities between the two films then I don’t know what to tell you. You must be a contrarian to be the point of exhaustion where no one likes you and you have no friends.


The biggest difference between Art School & Buzzsaw is that Zwigoff not only pokes fun at the modern art world, but he also kind of parodies it. Zwigoff’s disdain for modern art is documented in most of his work. There’s a famous scene in Louie Bluie where Howard Armstrong dismisses the famous Picasso statue in downtown Chicago. There’s a few more jabs in his second feature; Crumb, and Illeana Douglas’ character in Ghost World is an amalgam of arthouse clichés. Zwigoff comes from the same ilk of old curmudgeons as Harvey Pekar & Robert Crumb so it shouldn’t come as a surprise…

Dan Gilroy certainly pokes fun at the modern art scene but he doesn’t parody it. There is a difference. It’s a sometimes fine line (with the occasional ven diagram crossover) but there is still a difference. Gilroy almost went the parody route but at the end of the day he managed to show some respect. This is evident in the art that’s showcased in the movie. The haunted paintings of the mysterious tortured artist in Velvet Buzzsaw are actually pretty good. It’s difficult to make good (new) art that’s to be featured in a film. It’s even more difficult to make art for a movie that’s supposed be taken seriously. Especially modern art. Anyone reading this knows how often & easy modern art is made fun of in cinema. As a fan of (good) modern art, I find that trope to be a little played out (although some artists make it easy to poke fun at their work). Dan Gilroy went the route of Junebug (another film that shares some of the same DNA as Velvet Buzzsaw) in that it shows the pretentious side of modern art but still showcases good paintings. 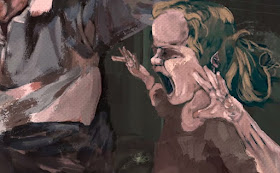 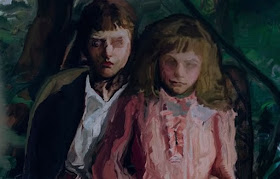 Criticism is also shown with respect. Jake Gyllenhaal’s character is a long-form art critic. Key phrase; long-form. In the era of twitter, facebook, Instagram, amazon & yelp reviews, everyone – literally everyone – is a (short-form) critic. The idea of a writing thousands of words on something is slowly dying. Not only that, but everyone thinks their opinion is super important. If you’re on twitter as much as I am these days then you’ve noticed the growing arrogance and sense of entitlement in a lot of twitter posts. People really think they’re “tastemakers”, “gatekeepers”, “critics” and/or “cultural critics” because they wrote two articles on Indiewire (and what's funny is that I’m willing to bet these articles were paid for in the form of “exposure” instead of actual money). And what's sad is some of these irrelevant & unimportant people do have small cult-like followings. I find myself scrolling twitter sometimes and going; “who are you?” or “what do you do?” that causes mobs of people to blindly & mindlessly “cancel” someone or change the opinions of thousands & millions of people simply with a vague, uninformed, unresearched, emotionally charged tweet? This idea is shown in Velvet Buzzsaw where Gyllenhaal’s character writes a bad review that causes an artist to kill himself. In a world of Armond White and Roger Moore (the “critic” not the actor), I’m slowly losing faith in the idea of modern day criticism. But seeing a filmmaker craft a character that is passionate about long-form writing/criticism is a breath of fresh air. It’s easy for a filmmaker to poke fun at critics. It takes a bit of talent to show critics some respect (especially when a lot of critics get off on being hurtful & mean).


Velvet Buzzsaw is a fun little film with a few imperfections (Jake Gyllenhaal’s weird ambiguous overly proper English/American hybrid accent comes to mind). If you take it too seriously then you're going to get yourself worked up for no reason. As long as you don’t expect a masterpiece and are willing accept a safe ending, then you wont be disappointed. There's also plenty to talk about once the credits roll. The film brings up issues concerning race, sexuality and integrity. You should also keep in mind that this is just one man’s opinion. The more I think about Velvet Buzzsaw the more I’ve come to terms with the ending even though it is a little cliché/typical for a movie set in the art world (*SPOILER* the movie ends with a homeless man selling priceless modern art on the street for $5 which kind of plays in to that stereotype that modern art can be done by anybody *SPOILER*).
Marcus at 3:01 AM
Share
‹
›
Home
View web version