THE CINEMA OF JOHN WILSON TOLD THROUGH MOVING IMAGES & STILLS 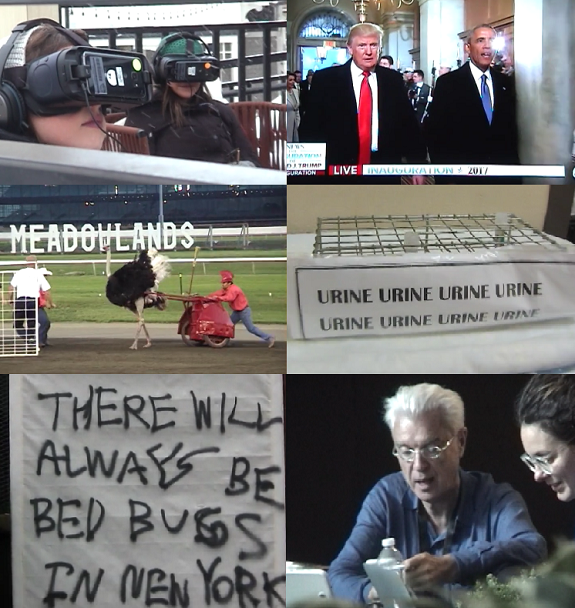 I first met John on the set of High Maintenance when it was a Vimeo show. A mutual friend of ours was working on it and asked us to be extras. I had just finished working an overnight and I was dumb tired, plus I ate two mcgriddles and was feeling extra Swayzed out. We played casting directors for Stomp, that musical where everyone makes dance beats out of the environment. I kept on asking dude who he was, if he was from Mastic Shirley and how we knew each other. I am still not sure how we know each other.

Does anyone really know anyone?

We talked about Titticut Follies, the merits of Werner Herzog's narrative films (particularly the delightfully moribund Stroszek), and Les Blank over cigarettes and Ramen noodles.
I wanted to quit smoking but he was super into smoking. I like wanton disregard for health and other types of unhealthy but hilarious behavior. He told me made a movie about how to keep smoking and I wanted to see it because it sounded tight. He emailed me his movies that night and I watched all of them. They are short and easily digestible. I find his movies to hit the notes that I like to look for in art and life - Tao simplicity meets a panic attack. How To Remain Single appeals to a withering social sense of decency. Escape From Park City shows the incredulous nature of the Sundance Film Festival, but is also hysterical and soul quenching if you have a soul (not everybody does). The Road To Magnasanti highlights the decline of New York using a Sim City experiment as a jumping off point. That movie destroyed me and made Marcus hate New York more than he already did.
¯\_(ツ)_/¯

I could continue to describe all of his movies but you can watch all of them in under two hours, so you should. You should watch them because. they are brief enough that they fit into our modern ADHD mind's needs for easy consumption and constant stimuli (i.e. mad short). and they are great, duh.

When my fiance (ww.saskiakahn.com) used his films as a teaching tool for young teenagers I asked him to send me a brief description of what he does and I believe it to be appropriate:


I like to shoot on cheap, available media because too much production kills spontaneity. My two requirements for a camera are that they turn on quickly and have a great zoom. I don't like when films feel like they need to be a certain length in order to reach an audience. Films have to have purpose before anything else. Money was a serious hurdle until I realized you don't need it. Release your films for free & people will eventually catch on if they're worth anything. Gotta keep moving.

HIDDEN MESSAGES
Amidst the organized chaos and awkward goings-on within the cinematic universe of John Wilson, we often find hidden imagery & messages almost like something out of John Carpenter’s They Live. Some messages come off as warnings or signs of caution (“The Hunt Is On”). Other times he offers words of encouragement & positivity (“chill out”, “relax” or “life is getting better”). I consider Wilson to be a New York City filmmaker. The hidden messages in his movies could be for anyone but being a New Yorker/someone who lives in New York is a little extra. New York City is a hard place and we sometimes need both words of encouragement and warnings to be on guard.


A lot of the hidden messages & words of encouragement are often taken from an ad or a commercial which leads in to our next category...

PRODUCT PLACEMENT
Product placement is all over John Wilson's work. The idea of ironic product placement and familiar labels shoved down our throats is certainly nothing new but Wilson’s approach is slightly refreshing and a little comical. I for one try my best to avoid stuff like Mcdonalds and microwaved food (I’m much healthier now), but every once in a while I find myself wanting a bagel bite or a quarter pounder which is a struggle a lot of people face (especially folks on the go like New Yorkers).

NEW YORK CITY
Much like previous Cinema Of… Alums (Abel Ferrara, Jim Jarmusch, etc), the majority of John Wilson’s films represent New York City. But what sets Wilson’s exploration of the big apple apart from the aforementioned filmmakers is that he’s from a newer/younger generation. We’re no longer in the romanticized world of street artists, junkies, squatters & no wave music. We’re now in the era of overpriced rent, paranoia & non-stop high-rise construction.

To really emphasize how I feel about New York City, here is an excerpt from a piece I wrote for The Pink Smoke last year on Michael Haneke's The 7th Continent.

Seriously, why is it that whenever something awesome happens in New York City (the kind of awesome stuff that could only happen in New York City like a great concert or a cool event at a museum) all you hear is; “Only in New York”. But when something shitty happens (the kind of shitty thing that could only happen in New York City like ridiculously overpriced rent or garbage everywhere on the street), all you hear is; “well that could happen anywhere. Don’t put that on New York City!” Fuck that double standard. Modern-day New York City is a terrible place that is only inviting to folks who are well off or believe in the false myth of what it is. I honestly see no reason for anyone to move to New York City unless you have a well/high-paying job. Everything is overpriced & expensive. There are too many people. It’s crowded. And whats worse is that New York City is overcrowded with mostly rude assholes. There are certainly rude assholes everywhere but its heightened when so many flock to the same place. It’s easy to avoid assholes in Atlanta or Miami because there are less people there. Things are more spread out. But you can't really avoid them in New York.

There’s nothing more annoying than when people come to visit and gush about how great New York City is when they’re only visiting for a week (or less). Try living here and experiencing this every day. Are people over the age of 15 still really impressed & amazed at all the blinkly bullshit in midtown Manhattan?

And before you go and get all offended (because we all know no matter how “tough” New Yorkers claim to be, they’re some of the most sensitive crybabies on earth especially when it comes criticism of their precious city), I was born in New York City (Queens to be exact). I’ve lived in New York City for a total of 20 years out of my 36 years of life thus far. So I’m a New Yorker by default and feel I have the right to complain and voice my opinion.

John's films are very much his own but from his use of text (Jonas Mekas) to technology/modern gadgets (Chris Marker), you can see shades of filmmakers that came before him.

POLICE STATE
A sub-category of John Wilson’s vision of New York city is the post-9/11 world we live in (you can also still feel the residue of Guiliani-era New York City). When you isolate all the images of (the very real) police officers in the films of John Wilson it looks quite unnerving (walk through Penn Station at random times of the day to see exactly what I’m talking about).

OUT OF CONTEXT AWKWARD HUMOR
You almost cant put it in to words but on a basic/surface level, John Wilson has a talent for awkward humor. Whether it’s the uncomfortable fumbling voiceover narration, the quick zoom-ins, the iphone cinematography, or the random shots of people riding the train, I find myself chuckling quite a bit at his movies. To get a better sense of what I’m talking about, it’s probably best to just watch some of his films below


The (sometimes) loneliness & misery found in John Wilson’s films are specific to New York City and nowhere else (this is dangerous for someone like me who feels beat down by New York because I enjoy watching Wilson’s films but sometimes feel a little depressed afterwards because they really hit home). Like I eluded to earlier, New York City is no longer the romanticized place it once was, but the dirt, filth, grime & crevices are still there. And outside of all that, there’s a huge feeling of displacement and not belonging in Wilson's vision of New York City which some poeple relate to very much.