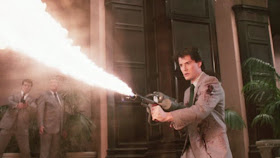 I'm Back on The Wrong Reel alongside Martin Kessler to chat with James about the (underrated?)/ recently rediscovered The Hidden.

Also, while you listen to the episode you might want to have some of my comparisons (below) handy as everyone from John Carpenter to David Cronenberg come up at some point as an influence or a reference.

Click the image above to go to the episode. Enjoy

To combat some of the pushback my comparisons get from time to time (again - I do admit that some of these are reaches and just look cool next to each other), I've decided to move in to the realm of moving frames to emphasize the similarities between certain films (it's easy to capture a still frame and pause it at the right moment to make it look how you want).

Andrei Tarkovsky & Alexander Sokurov had a friendship/relationship. Sokurov has spoken about Tarkovsky on numerous occasions and, in so many words, has acknowledged the subconscious influence Andrei Tarkovsky has had on his films.
Now...it's one thing to write that, and another thing to show these two pivotal scenes (below) side by side. There's lots of movies of men standing in fields of grass but things get a little less vague when you get more detailed.
Both films are slow, semi-personal (RUSSIAN) films about loss & grief with contemplative moments where we find our protagonists not only standing in a field pondering life, but their movements are damn-near identical (notice how they both look over their shoulders in a similar fashion).


This admitted subconscious influence continues with Tarkovsky's Sacrifice where certain scenes/shots are, in my opinion, undeniably similar...

There have already been enough open & shut cases made for Tarkovsky's influence on the usual suspects like Reyegadas, Von Trier & Malick. But perhaps some moving imagery will hammer home what I've been exploring on this site for the last 6 or 7 years...


Let's also not forget that Claire Denis worked with/alongside Tarkovsky at one point in her career...

Beyond those - who knows what (or if any) kind of influence Tarkovsky may have had on modern cinema. If you look below, you'll see some new comparisons that could be total reaches. But when I see dynamic shots of tattered ceilings & lens flares in David Gordon Green's George Washington, it's hard to not associate that imagery with Ivan's Childhood...

From The Exorcist to The Revenant and so many films in between, the shot of a floating figure is common in modern film. But I find this specific moment of Trent Reznor laying flat on his back in the Closer video (below) to be very similar to The Sacrifice (above)

And here are a few more new comparisons that may have some validity... 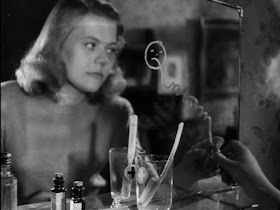 On this latest episode we delve in to everything from Ingmar Bergman to Guy Maddin. Enjoy (don't forget to subscribe on Itunes, Soundcloud & Google Play) 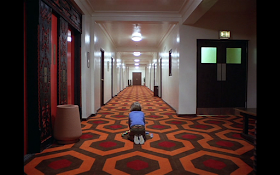 It was an honor to appear on the awesomely thorough & amazingly re-searched Shining 2:37 podcast where Kubrick's The Shining is broken down & discussed in increments of 2 minutes & 37 seconds at a time. Click the image above to go to the episode.

THE CINEMA OF DAVID GORDON GREEN TOLD THROUGH IMAGES & STILLS 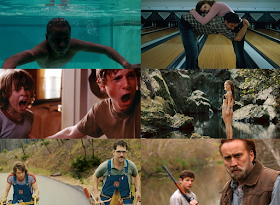 While Terrence Malick is definitely the indirect influence for Green's early career, I still like to give direct credit to David Gordon Green and his debut feature George Washington for kicking off this new generation of southern-based poetic indie films. Green pretty much took the style that Malick reemerged with in 1998 (The Thin Red Line) and veered off in to a different lane. Clearly a young 26 year old director (like Green was at the time of GW's debut) wasn't the first to show a different side of the American south in the year 2000, but ever since the heavily Malick-influenced George Washington debuted, more & more films that were similar in tone & atmosphere began to emerge. You know - films like; Mud, Take Shelter, New Jerusalem, Ballast, Beasts Of The Southern Wild, Ain't Them Bodies Saints, Undertow, As I Lay Dying, All The Real Girls, etc. You could even throw Upstream Color in to the mix given it's dreamy atmosphere along with director Shane Carruth's southern roots.
While I only really like some of the aforementioned works (Ballast, All The Real Girls & Upstream Color) and find the rest to be "ok" (Shotgun Stories), Overrated (Mud), very problematic (Beasts Of The Southern Wild & Ain't Them Bodies Saints) or just plain bad (Take Shelter), they all still show a more complex & poetic side of the American south that can be traced back to Green and his early work.

With recent stuff like Our Brand Is Crisis & The Sitter, some would say that David Gordon Green has moved on from "The New South", but his work on shows like Eastbound & Down & Vice Principals (along with semi-recent films like Joe) shows that his Southern roots are still intact...

MALE BONDING
David Gordon Green doesn't get enough credit for showing the sometimes sensitive side of men and their/our ability to bond with one another. Prior to stuff like Our Brand Is Crisis & The Sitter, almost every film he made dealt with friendships between males of various ages (All The Real Girls, Prince Avalanche, George Washington & Pineapple Express) or the bond between brothers (Undertow & Your Highness)...

RECURRING SHOTS
The cinema of David Gordon Green wouldn't be what it is without these key shots & settings...

RECURRING SETTING: THE SOUTH
After a few personal conversations with various friends I came to the realization that north of D.C., the south has a bad reputation thanks in part to us Yankees up north (that's not to say that some southerners don't play in to some of the negative stereotypes, but still...). Over the years I've heard some pretty crazy generalizations about the south by people who have spent none to very little time there outside of Miami which almost doesn't even count. I'm not gonna sit here and try to say that the racism in the south isn't deeply rooted unlike any other place in this world. History clearly proves this. But at the same time, I spent five years living in Virginia (the home of the Confederacy's capital) and the most racist things that have ever happened to me in life so far have taken place in my ultra liberal P.C. hometown of Amherst Massachusetts, Milford Connecticut and New York City. I mean seriously, a lot of my friends question how things are in the south as if places like Boston or Howard Beach don't exist in the north.

Outside of the race issues, there's also the stereotype of southerners being dumb country bumpkins and Green's movies kind of debunk this to a certain extent. There's a slow simmering poetic ambiance to his movies (specifically his early shorts and his first three features).
Be honest - what cinematic world would you rather visit - the rude & busy world of NYC, the superficial world of L.A., or the relaxed slow moving world of the American south? It's understandable if some of you rational thinkers still picked NYC or L.A., but for those of you who always complain about being broke, anxious and/or depressed due to city life - you might wanna consider embracing the beauty that is southern hospitality.

INFLUENCES & VISUAL SIMILARITIES
David Gordon Green will probably be synonymous with Terrence Malick for the rest of his career (not only was George Washington considered an homage to Malick, but they also worked together on Undertow). But if you look a little deeper you'll see that his films have visual similarities to everyone from Takovsky & Dreyer to Charles Burnett & David Cronenberg.

Unlike other filmmakers who deny or don't acknowledge being influenced by obvious sources, David Gordon Green is always open about his love for Terrence Malick. On the commentary track for the George Washington DVD, he drops Malick's name numerous times.

And if I may be so bold to say, I feel like the post-2005 Terrence Malick was influenced by his unofficial "pupil" (Green) post-George Washington. I know that by saying Malick was influenced by David Gordon Green really means that Malick was actually just influenced by himself, but ever since he produced Undertow, he got the courage to go even deeper in to his own style. From The New World to Tree Of Life to To The Wonder, Malick's work has become more daring & experimental.

UNEXPECTED MOMENTS OF VIOLENCE
Green's cinematic universe is often tame & meditative then out of nowhere he surprises us with an explosive bar fight (Joe), a gunshot blast (Snow Angels), a murder/accidental death (George Washington & Undertow), or, most recently, a literal explosion (Stronger)...

I'm not sure if this is intentional but since day one (Physical Pinball), the family units in Green's cinematic universe are often run by one parent. And they aren't the typical single mom homes either. Films like Physical Pinball & Undertow show that while they are in the minority, men are also capable of raising families on their own which is something you don't see on the big screen too often (and when you do, the men/fathers are often clueless idiots about raising children)

these single parent homes sometimes bring about tension within the family...

FAMILY/FAMILY TENSION
From dead parents & custody battles to unresolved sibling rivalry, the families in Green's films could use some therapy as far as I'm concerned...

YOUNG LOVE
Young love is awkward. It fills you up with that fun kind of anxiety that you hate & love at the same time. You can't fully be yourself and you say the most random things. There are some moments in All The Real Girls that seem a bit forced. Random lines like; I had a dream that you grew a garden on a trampoline, and I was so happy that I invented peanut butter or moments between Schneider & Deschanel where they stammer & stutter nervously in each other's presence but when you think about it we've all said random & embarrassing things or have been nervous & anxious around someone we're in love with or have feelings for.