THE CINEMA OF MARINA DE VAN TOLD THROUGH IMAGES & STILLS 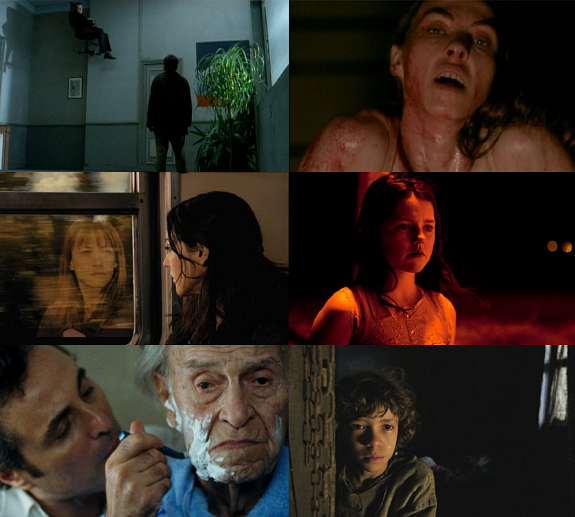 Marina De Van is a director/writer/actress that walks along her own unique path. With five feature films and a handful of shorts under her belt she has not only made a dent in the art house world (The New French Extremity scene to be specific), but has also carved out her own little niche and breathed life back in to genres like Body Horror and the Psychological Thriller (I consider her feature debut In My Skin to be one of the best films of the last decade).
Marina De Van is an important female voice in modern film. While filmmakers like Catherine Breillat tackle the subject of sex & sexuality among women (especially young women) and Claire Denis focuses on the (sometimes) taboos of interracial relationships often told from the perspectives of (white) women, De Van focuses on sanity, repressed memories and the female psyche.
Her films are defiant & challenging. Why is it that when a male director gives us an unflinching (yet tasteful) look at sexuality, blood & violence it’s ok, but when a woman does it, it causes a mini-uproar? Films like History Of Violence & Eastern Promises (Cronenberg) & Bug (William Friedken) are met with generally open arms while In My Skin (De Van), Trouble Every Day (Denis) & Anatomy Of Hell (Breillat) were all met with initial hostility & pushback. These are the kinds of questions that come about when discussing her work.

Marina De Van isn't exactly a household name but just about all of her movies are available on every major streaming platform. Hopefully this piece will inspire some of you to seek out her work and get familiar.


WOMEN ON THE VERGE OF A NERVOUS BREAKDOWN / FEMALE LEADS
Mental illness affects us all. It doesn't specify according to gender. However Marina De Van focuses on mental illness among women. Her films are very "female-centric" and there's a lot of estrogen in the cinematic universe of Marina De Van. Who knows hormones & the mindstate of women more than a woman herself? That's not to say a man couldn't direct a film about mental illness as it pertains to women but wouldn't you want to see a woman do that first?

Now that we're in an era where folks are pushing for female filmmakers now more than ever, perhaps Marina De Van should be considered a varsity-letterman in that movement...

with that being said...

TRUAMATIC EVENTS & TRIGGERS
In her feature film debut (In My Skin) we see our main (female) character develop a newfound fascination with cutting & self-mutilation after she takes a nasty fall at a party (the fall just triggers something dark that was already inside her).
In Don't Look Back we see a woman struggle with a split personality disorder brought on by something triggered from her past. Dark Touch is an allegory for child abuse (the child in this case happens to be a little girl) while Alias deals with a woman struggling from an unknown tragic event that stopped her modeling career...


LONELINESS & DEPRESSION (mostly among women but with a few exceptions)

The traumatic events from the above category often leads to depression and characters isolating themselves from others...

THE FEMALE FORM
Marina De Van doesn't shy away from showing the beauty that is the female body. While a lot of female filmmakers avoid gratuitous nudity & "eye candy", De Van embraces the female form (In My Skin almost doubles as an excuse for her to show off her own beautiful body).
And because we're seeing the female body through the lens of a woman, it ends up being tasteful...

BLOOD & BODY HORROR
I'm sure De Van would dismiss the idea of being labeled as a "horror director", but a large majority of her films feature blood, murder, mutilation and the occasional supernatural character.

She's also one of the leading voices in the current body horror genre although you'd never know that because most cinephiles with an opinion on said genre cant get past David Cronenberg. But almost everyone one of Marina De Van's films features gruesome body transformations (Don't Look Back), body dismorphia (Le Petit Poucet) or severe self-mutilation (In My Skin).


TRANSFORMATION/METAMORPHOSIS/SURROGATES…
Characters in movies starting out one way then changing in to someone/something new is hardly unique. But in the word of Marina De Van it’s incredibly drastic and sometimes jarring. In See The Sea we watch a character take the place of someone after violently murdering them. At the start of In My Skin we watch a relatively happy person slowly change to a darker version of herself. In the appropriately titled Alias we see our main character ditch a party by making her housekeeper take her place (no one notices). And Don’t Look Back is about a character with multiple personalities disorder.

DARK LIGHTING
I'm not sure if this is intentional or not but what makes De Van's films work so well is that a large majority of her work is lit very darkly which adds to the mysterious ambiance. Marina De Van works almost exclusively within the horror & psychological thriller genres so dark color palettes & nighttime settings only enhance the scary/uncertain mood...

SPYING & VOYEURISM
Horror, Psychological thrillers & The New French Extremity are the common genres that are associated with Marina De Van but she also dips her toes in to the neo-noir genre. We often find the characters in De Van's films creeping on others (La Promenade) or spying in an effort to uncover the truth (Don't Look Back).

CRITICISM OF (SOME) MEN
This one is a little complicated...

While she isn't calling out all men on their bullshit, De Van certainly shines a spotlight on the very real (negative) characteristics that do exist in some men.

The men in the films of Marina De Van are often monsters (Le Petit Poucet), aggressive (Dark Touch), aloof (Don't Look Back), weak & pathetic (Psy-Show) or aggressive & self-centered (Marina De Van's boyfriend in In My Skin is so self-absorbed that he isn't supportive of his girlfriend who is clearly suffering from severe mental illness).

THE PRESENCE OF CHILDREN
The idea of "the past" is an overlooked element in the cinematic universe of Marina De Van. It's easy to forget when you're dealing with body mutilation & extreme violence but flashbacks (Don't Look Back), repressed memories (Dark Touch) and the past (Le Petit Poucet) are key elements within her work and they are usually manifested through the children in her films...