Uncle Boonmee Who Can Recall His Past Lives is a Thai film set in the jungle which makes it a monkey movie by default (Monkeys & Thai jungles kind of go hand-in-hand). There are monkey's all over this film... 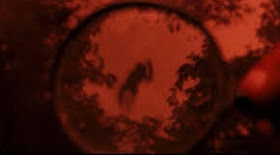 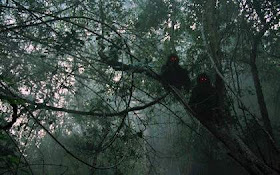 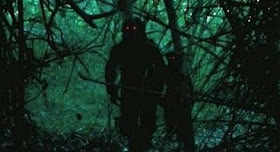 Uncle Boonmee also has a coincidental connection to quite a few other monkey-based movies and monkey-based urban legends.

Take the most iconic/memorable shot from the movie. Right away, what are we reminded of when we look at this side/profile shot of a humanoid/monkey looking directly in to the camera?


Now…things don’t have to be identical in order to be a reference. I know Bigfoot doesn’t have red eyes and he was walking through a forest rather than a jungle, but unless you’re a very nitpicky person I think you can see the similarities.


But it doesn’t stop there. Take some more notable images from Uncle Boonmee like this one…


To me, this is an obvious subconscious nod to Princess Mononoke. I mean – from the way the monkeys are gathered around each other to the obvious red eyes, there’s no way in my mind that director Apichatpong Weerasethakul wasn’t aware of this cartoon. The similarities are too strong.

Uncle Boonmee also has some strong connections to another monkey-heavy film in the form of Jumanji. Here we see characters from both films transitioning to monkeys...


And this isn’t the first time Apichatpong referenced Jumanji (in reality I’m pretty sure he didn’t really reference Juamnji but in my mind I like to think he did). In his 2005 film Tropical Malady (another Thai film set mostly in a jungle) we witness one of the main characters transition in to an animal...


And still – it doesn’t stop there. Uncle Boonmee has some visual similarities to Harry & The Hendersons…


As well as the art of Max Ernst…


So even though Uncle Boonmee is the epitome of what a modern art house film is (slow, minimal dialogue, weird, surreal, strange, mildly pretentious, etc), it still branches off and connects to more popular/accessible movies.

It is my personal opinion that Uncle Boonmee is one of the five best movies of the decade so far, but that doesn’t mean I blindly recommend it to any & everyone. Those key words I just used do very much describe this movie (slow, minimal dialogue, surreal, strange, mildly pretentious, etc). But if you have an open mind I do recommend checking it out (after having a cup of coffee and a strong attention span). And perhaps if you think of the subconscious influences & references to more popular films like Juamnji, Max Ernst & Harry & Hendersons, perhaps it will help you enjoy Uncle Boonmee a little more.

Now…I picked this movie because I have a strong personal connection to it. I admit that when Kevin first asked me to be on this show I just blindly accepted without having a movie in mind. I just love these shows so much I wanted to be a part of it. But after a day of thinking it over, I realized this was the movie to cover. I don’t really have much of an opinion or attachment to stuff like King Kong or Planet Of The Apes outside of the subconscious racial undertones that both movies have.
If I could just divert for a second and be the black guy to talk about racial stuff for a minute, it doesn’t take too much deep thought to perceive that both movies could be seen as alternative theories about white people’s fear of Black people. The N-word isn’t the only racial slur that people have used to describe Black people over time. Monkey has certainly been used as coded language to describe black people. And when you take a movie like Planet Of The Apes which deals with a group of monkeys taking over the world, or the way black people are depicted in King Kong – it really isn’t too far-fetched to see the possible racist undertones. But that’s a whole other conversation that we don’t need to get in to right now. Sorry if I ruined King Kong or Planet Of The Apes for everyone in the audience right now. I’m certainly not implying that if you like these movies you’re a racist or anything like that. I could totally be clutching at straws with my theories on these films.

Back to the movie at hand… 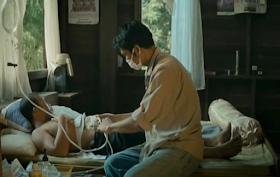 Uncle Boonmee is about more than just monkeys. A big subplot of this movie deals with the main character dying from Kidney disease which is something both my father & I struggled with (we both had kidney transplants). I mention my father because 5 days before I was supposed to present at the January show about rip-off cinema he passed away from an unexpected heart attack (sorry for bringing the mood down). After I called my family & close friends, Kevin was the next person I called. Obviously out of courtesy I had to call him to let him know that I wouldn’t be able to do the show but it hit me how powerful it is that Kevin was one of the first people I called regarding my father’s passing. So Kevin Geek’s Out will probably always make me think of my dad in some form.

On a lighter note, I will say that my father wanted to come to the January show and he was super excited to see me present (he liked movies quite a bit). So I’d like to dedicate this presentation to my dad. Without him I probably wouldn’t have the obsessive love for cinema that I have today.