RIP-OFF CINEMA: KICKBOXER VS. KING OF THE KICKBOXERS (KEVIN GEEKS OUT) 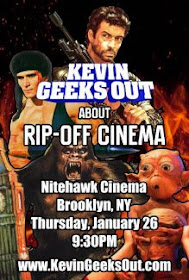 Due to unfortunate circumstances I wasn't able to participate in the most recent Kevin Geeks Out event which is a bummer because, for those of you that aren't familiar with my site or follow me on Twitter, the subject of this particular show is literally what I do. In fact - I like to think I'm somewhat of an expert on the subject.
When it comes to rip-offs, homages & influencing within cinema, things can get a little muggy, layered & complicated. Some filmmakers have no qualms when it comes to admitting to borrowing or flat out stealing from other filmmakers (usually their cinematic elders). Take Jim Jarmusch for example. He was once quoted saying:

Nothing is original. Steal from anywhere that resonates with inspiration or fuels your imagination. Devour old films, new films, music, books, paintings, photographs, poems, dreams, random conversations, architecture, bridges, street signs, trees, clouds, bodies of water, light and shadows. Select only things to steal from that speak directly to your soul. If you do this, your work (and theft) will be authentic. Authenticity is invaluable; originality is non-existent. And don’t bother concealing your thievery - celebrate it if you feel like it. In any case, always remember what Jean-Luc Godard said: "It’s not where you take things from - it’s where you take them to."


This shows the maturity of Jim Jarmusch given that so many other filmmakers try to act like they're above being influenced when they obviously are.

It's one thing to read that quote and take it at face value, but it's a whole 'nother thing to take his films and put them up against older films that more than likely were a source of influence or inspiration.

(and if those above images are too vague, the final sequences of Ghost Dog & Le Samourai are pretty identical)


But Jarmusch also uses Ghost Dog to tip his hat to other films like Branded To Kill... 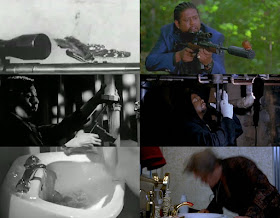 
And outside of Ghost Dog, Jim Jarmusch has borrowed from everyone from his friend Wim Wenders...

who in turn has borrowed back from Jarmusch as well...


Then there are cases that are completely coincidental. Look at these two scenes from Ninja 3 & Roman Polanski's Bitter Moon. Now...I'm willing to bet everything that Polanski doesn't even know Ninja 3 exists. But the similarities between these two crucial scenes are so polarizing that it should still be called out...


Then there are questionable examples like in the case of Mad Max: Fury Road & The Passion Of Joan Of Arc...

There is absolutely no way of knowing if George Miller watched The Passion Of Joan Of Arc and got inspired to pay (visual) homage to it in his Mad Max reboot but just look at the similarities. These frames aren't identical (and images don't have to be identical in order for something to be an homage or a copy), but between the shaved head, teary eyes and the tilts/angles of their heads - it does make you wonder (plus George Miller being familiar with Carl Theodore Dreyer's work isn't the most far-fetched thing someone could imagine).


But I'm not going to bore you all with talk about artsy arthouse filmmakers like Jarmusch, Melville & Dreyer. We're going to delve in to Kickboxer and it's unrecognized rip-off: King Of The Kickboxers. 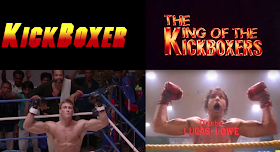 Kickboxer is hardly the first movie to do what it did. There are plenty films about a novice/above average martial artist seeking out a grumpy older martial arts master to train them in order to get revenge on someone. But it is my belief that director Lucas Lowe bypassed all the films that went in to influencing all the direct-to-video underground fighting tournament movies that were so popular in the 80's & 90's, and he just took directly from Kickboxer.
King Of The Kickboxers isn't a rip-off like Mac & Me was to E.T. but it's still a rip-off. In fact, the plots to both films are so similar that I can easily talk about them interchangeably. Kickboxer/King Of The Kickboxers are about American expat novice martial artists living in Thailand looking to enter the underground kickboxing scene in order to earn a fight with the man responsible for the crippling (Kickboxer)/death (King Of The Kickboxers) of their older brother (Van Damme does maintain his Belgian accent but I think it's implied that he's still American).

Both movies have the same exact pacing, plot points and minor details....


And I'm well aware you're going to have a lot of the same imagery in any fighting movie. Raising your fists in celebration after winning a fight is certainly nothing that Jean Claude Van Damme invented. However, we all know Van Damme is the KING of the splits. So when I see stuff like this (below) combined with the similar plot points & details I just showed you - a serious red flag goes up... 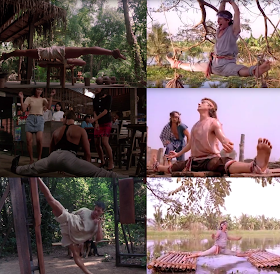 There's also a subconscious/borderline metta element to all of this because Billy Blanks (the man who plays the villain in King Of The Kickboxers) and Jean Claude Van Damme (the star of Kickboxer) worked together after both of their respective movies were released...


There's another layer of influence/rip-off/homage/whatever in that both Kickboxer & King Of The Kickboxers went on influence famous video game characters in Street Fighter...

which would eventually be adapted in to a live-action film starring Jean Claude Van Damme...

Now...I don't mean to take anything away from King Of The Kickboxers because it is an entertaining action movie. It's very goofy and kind of dumb but still entertaining nonetheless. The movie also stars legitimate martial artists which is something Kickboxer cant really say.
If you're in to fun mindless action movies then King Of The Kickboxers is right up your alley. And if you're a fan of vintage Van Damme movies then it isn't inconceivable that you couldn't enjoy a knock-off Van Damme movie.

So when you have some free time head on over to youtube (be sure to rent these so you get the better quality) and watch this is a double feature in the comfort of your home with a friend or two.

THE CINEMA OF YORGOS LANTHIMOS TOLD THROUGH MOVING IMAGES & STILLS 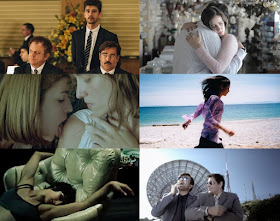 For the last couple of years Greece has produced some of the most unique, surreal, dark, deadpan, quirky comedies committed to celluloid and Yorgos Lanthimos has been at the helm of this movement. Sure his films aren't for everyone but he's managed to grow his audience with each film without having to compromise his unique style.

My favorite aspect about Yorgos Lanthimos' work is that there's a continuous thread that connects all of his stories. A while back at a Q&A I asked Lanthimos if he looked at The Lobster as an extension of Alps (I feel like both stories exist in the same cinematic universe). While he doesn't share my spectrum-brained fascination with connecting every movie in existence, he did acknowledge that there are quite a few similarities between both films. But this has been a theme in his feature length work since day one...

If you’re willing to get past the look of Kinetta - his often overlooked feature film debut - you’ll see that it literally planted the seeds for all the recent stuff we know & love like Dogtooth, Alps & The Lobster.
It is my opinion that Kinetta, Dogtooth, Alps & The Lobster all take place in the same universe. I wouldn’t be surprised if some of the characters from Kinetta knew some of the characters from Alps. Kinetta also has very little dialogue. For those of you who haven’t noticed (or are only familiar with The Lobster) minimal/spaced out dialogue is a common characteristic of Lanthimos’ pre-Lobster work. Both Dogtooth & Alps contain a lot of empty space as far as talking goes when compared to "conventional movies". Loneliness (The Lobster), identity (Alps & Dogtooth), awkward dryness (Lobster, Alps & Dogtooth) and deadpan expressionism (Lobster, Alps & Dogtooth) are embedded in to the fabric of Kinetta. Even the basic plot of Alps sounds like a light reworking of the plot to Kinetta. So while he continues to grow with each movie, everything is kind of rooted in his early work.

Not only does Yorgos Lanthimos have a unique sense of humor and a talent for tying all of his films together, but he also has a serious/borderline socially conscious side. His work sometimes dispels some of the myths that outsiders have of his homeland of Greece (we see a lot of his characters as unhappy servants). I’ve never been to Greece but I’m sure it’s beautiful. I’m sure some places are like paradise on earth based on some of the pictures I’ve seen. But (some) outsiders have this romanticized vision of Greece as if it’s one big vacation getaway (same with places like Nevada, Hawaii and even Florida to a smaller extent). Films like Kinetta, Alps and Yorgos' student films show a side of Greece that most people aren't used to seeing.


So now that Yorgos Lanthimos has become a successful academy award (Dogtooth) & golden globe (The Lobster) nominated filmmaker, lets take a look at this entire body of work.

Although Yorgos did not direct Attenberg, he still produced & co-starred in it so I'm including it in this entry.

IDENTITY
People in Yorgos Lanthimos' cinematic universe are usually never satisfied with their real lives or who they are as people so they're always looking for some kind of escape or to take on the persona/identity of someone else (momentarily or permanently).
The characters in Kinetta are bored with their lives of servitude so they decide to reenact fake murders for entertainment. The entire plot to Alps concerns a group of adults who take on the identities of other people and more than a few of the key figures in The Lobster get in to trouble for lying about who/what they really are. This is always highlighted in an introspective scene of someone reevaluating things in front of a mirror...

At a quick glance, these are the core elements that make Yorgos Lanthimos' films his own without needing much explanation...

SPURTS OF VIOLENCE
You can always count on random and/or isolated unexpected explosions of violence that are sometimes tragic & horrifying, hilarious or a combination of all of those things...

DARK/QUIRKY HUMOR
Like Todd Solondz (a director I am convinced had an influence on Yorgos no matter how many people disagree), you sometimes find yourself questioning if you should be laughing at the actions, storylines & isolated violent moments in these movies. On paper, a lot of the shit that he presents to his audience should not be funny... but it kind of is (animal murder, incest, violence against women, death, etc).

THE NAKED (AND SOMETIMES AWKWARD) HUMAN BODY
In addition to sex, Yorgos Lanthimos doesn't shy away from showing the naked/almost naked human body in all shapes & sizes...

FAMILIES & SURROGATE FAMILIES
Although introversion & self reflection are fairly common elements in the world of Yorgos Lanthimos, rarely do we see characters exist or even live alone (his most famous/known work is a family dramedy). And even when these characters do live alone, like in the case of Alps, they still belong to some kind of collective/non-blood related group (Kinetta) or borderline cult (The Lobster)...


and these families always have a “leader”/”overseer” that rules with a tight fist...

OPEN ENDINGS...
Yorgos Lanthimos' films wouldn't be what they are if he didn't leave us hanging. The fate of Ferrell & Weisz at the end of The Lobster looks rather grim but it still isn't fully spelled out for us. The same applies to the main character in Alps. Sure we know she's gone off the rails but where will she go now that she's been kicked out of her group. And what will happen if/when the father in Dogtooth finds his daughter hiding in the trunk of his car?