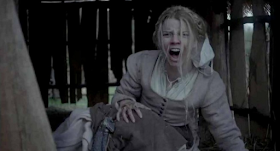 Check out my latest appearance on The Wrong Reel podcast where we discuss The Witch (make sure to read my review of the film as well). 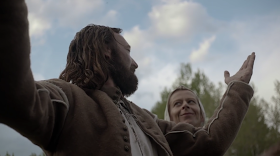 A lot of recent horror films just aren’t scary to me. Not even chilling or mildly startling. Some are downright overrated like in the case of It Follows. Sorry to fire cheap shots but I still honestly don’t understand what folks see in that movie. From the inconsistent plot/rules laid out in the film to the overall bored tone – I just don’t get it (the same can also be said about The Visit).

I’m not saying all this to sound cool like I’m above being startled or I’m “too cool” be scared (and there are a few semi-recent horror films that I do enjoy – like Insidious & Pontypol – but not because they're scary but rather because they're well-made & entertaining). It’s just a lot of horror films are often predictable which sometimes takes the fun out of being scared (you can see a startling or scary moment coming from a mile away) or they try to overcompensate by being unnecessarily shocking & bloody. The Witch does neither of those things. It’s subtle and relies on atmosphere & ambiance as opposed to stuff like (un)scary little children with hair draped over their faces slowly walking towards us down a dark-lit hallway. ...Technically the film does have creepy little children characters but not the typical creepy children one might find in The Ring, The Grudge or whatever POV exorcism film happens to be out in theaters this month or streaming on Netflix.
And don't get me wrong - The Witch certainly has some bloody disgusting moments but they're spread out. There are actually moments in the film that are downright boring. But the 17th century seemed like a boring time so it makes sense.

It should be said that I am not a horror aficionado so take everything I’m saying with a grain of salt... 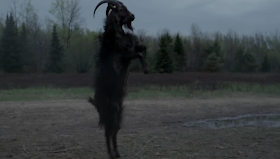 In The Witch we follow an exiled religious family (headed up by Father “William” & Mother “Katherine”) who have recently relocated to a small New England property right on the edge of a wooded area that appears to be haunted. All seems to be going well for the family until their youngest child suddenly goes missing and the family starts to suspect their oldest daughter ("Thomasin") might be the cause of that and all the other strange occurrences going on.
Naturally this film deals with the barbaric ignorance & religious superstitions folks had about witches & witchcraft back then, but if you take out the horror element, this is a drama about the breakdown of a family due to the insertion of an unspoken “virus”/threat similar to Pasolini’s Teorema or Francois Ozon’s Sitcom (a loose remake of Teorama). This isn't meant to be an all-out brag but co-star Anya Taylor-Joy thanked me for bringing up this point at the Q&A I attended. Not only did the actors portray a family living on top of each other in a small space in the movie, but they also lived together during the filming of the movie so naturally reality seeped in to the story. So whether you're a fan of scary movies or not, The Witch does branch out to genres beyond just horror.
Director Robert Eggers still isn't beyond playing in to traditional horror tropes. As you can imagine there are quite a few startles & possibly scary moments (depending on your threshold) and the score is both sparse & jumpy at the same time (I guess one criticism I have is that the score sometimes made it obvious as to when something spooky was about to happen).

What I found most interesting about The Witch (on a personal level) is that it seemed to draw inspiration from the (few) positive aspects of Ben Wheatley’s Kill List. Both films have a creepy/mysterious tone, they both death with the occult and they have similar color palettes (I highly doubt this was intentional but perhaps Kill List had a subconscious influence, or the similarities are just a coincidence). I’m not a fan of Wheatley’s 2011 horror/thriller but the one thing Kill List did have going for it was ambiance and that certain element of “coolness” – the tone of the film was dark & grey, a good portion of the dialogue was both “in the know” & mumbled, and Wheatley took his time setting up moments in the film that were meant to startle or shock us. Basically - there wasn’t a whole lot of blood & guts and forced satanic symbolism around every corner of the film (I have since grown on Kill List – although I still think it’s overrated - but to read my original thoughts on the film, click here).

Besides Kill List, The Witch seemed to come from the mind of someone with an appreciation for all kinds of cinema. Visually, I was reminded of everything from the Exorcist & Salo…

Unfortunately because the film is so new I don't have certain specific images to compare, but there are sequences that might remind one of The Shining (the second time we see the film's possible antagonist) as well as Antichrist or the obvious Wicker Man (the very ending). But these will have to do for now...

Director Robert Eggers, who self admittedly is obsessed the folklore behind witches & witchcraft, was also a teenager when the Blair Witch phenomenon hit so perhaps there’s some subconscious residue from that as well (again, I’m sure all of this is a coincidence, but a cool coincidence nonetheless).

THE CINEMA OF CHARLES BURNETT TOLD THROUGH IMAGES & STILLS 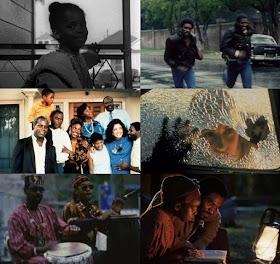 I was exposed to Charles Burnett's films at a young age (prior to any knowledge of what Killer Of Sheep was) thanks to my parents. I'm sure it wasn't their intention to put me on to the work of a great auteur in my early teens, but had it not been for my parents putting down the remote control every time they saw a black face on the television while channel surfing (and the somewhat eclectic cable TV programming back in the early/mid 90's) I wouldn't have been exposed to films like The Glass Shield, Nightjohn & To Sleep With Anger (it should be noted that it was PINNLAND EMPIRE contributor Leanne Kubicz who recommend Killer Of Sheep to me almost 10 years ago).


My primary reason for doing this entry (besides the fact that I'm a huge fan) is to show certain folks that Charles Burnett’s cinema goes beyond Killer Of Sheep & My Brother’s Wedding (a film most people, myself included, wouldn’t have seen had it not been included in the special features of the Killer Of Sheep DVD). Not to take anything away from either of those movies, because they're both excellent, but his filmography goes deeper. Like F Gary Gray, Wendell B Harris or Matty Rich, Charles Burnett is another black filmmaker that never had much of an alliance or association with other prominent black filmmakers like Robert Townsend & Keenen Ivory Wayans, Spike Lee & Ernest Dickerson or Lee Daniels & Tyler Perry. He’s always had to walk his own path (and in doing so he left behind an incredibly underrated body of work that continues on today).

We’re currently in a climate where a lot of folks are screaming #Oscarsowhite and complaining about a lack of diversity in cinema, yet never shoutout or namedrop (ACTIVE) pioneers & trailblazers like Burnett, but rather typical run-of-the mill films & filmmakers that I won’t even mention. So maybe stop complaining about two or three films not getting recognized for a few minutes and get familiar with Mr. Burnett.

FAMILY/EXTENDED FAMILY/COMMUNITY
From features (My Brother’s Wedding, Killer Of Sheep, To Sleep With Anger) to shorts (When It Rains, Quiet As Kept, Several Friends), a large majority of Burnett’s films are centered around family and/or close-knit communities. Even his movies that have nothing to do with family (Glass Shield) still feature multiple scenes of the family unit gathered around a dinner table or at some kind of family gathering.

All of this branches off to sub-categories concerning the family unit like the (usually healthy) relationships between father & child, mother & child, and just the overall importance of children.

I could be reaching with a few of these, but Burnett (specifically Killer Of Sheep) is one of those filmmakers people often study in film school, so it isn’t too farfetched to assume he had a subconscious impact on a lot of filmmakers that came after him…

STOICISM & PRIDE
The American Black male is a unique, complex & complicated figure that isn’t often given the credit he deserves in cinema. Burnett explores this wonderfully in films like Killer Of Sheep & Bless Their Little Hearts where we see the man/father/head of the household to proud to accept help in a time of need. In The Glass Shield, a film that’s more relevant now than ever, we watch our lead character go from dedicated (Black) police officer with an “illusion of inclusion” (at one point in the film he goes so far as to bend the rules to help a white officer frame an innocent black suspect) to a man targeted by the very people he thought had his back (The Glass Shield does a great job at showing how "the blue shield"/police brotherhood is pretty exclusive to just white male officers).
And in To Sleep With Anger Burnett explores anger, rage & frustration within black males in a sympathetic kind of way.

With all that being said…

FRUSTRATION & DEPRESSION AMONG BLACK MEN
Depression isn’t often associated with black men (especially in film). And in those few instances where depression is explored, it’s usually centered around the same struggles (violence, the idea of living & struggling in “the hood”, etc). Burnett’s view of depression in Black men ranges from the fear of poverty & not being able to provide for one’s family (Killer Of Sheep & Bless Their Little Hearts) to genocide/colonialism (Namibia) & hopelessness (The Glass Shield).

VILLAINS & SHADY CHARACTERS
Burnett has this unique ability to craft certain characters that just ooze trouble & shadiness the minute they first appear on screen (Burnett has never been given the same credit as other filmmakers like Cronenberg & Verhoeven for his use of Michael Ironside in The Glass Shield).

SHORT FILMS & EXPERIMENTATION
Along with the likes of Hal Hartley, Lynne Ramsay and a small handful of others, Charles Burnett is one of the few active filmmakers to still make short films before, during & after his rise to prominence…


RACE IN AMERICA & BEYOND...
I know a lot of folks expect filmmakers of color to explore racism, but Burnett runs the entire gambit from slavery (Nightjohn), to Jim Crow-era segregation (Selma Lord Selma) to modern day racism (The Glass Shield) and even racial taboos concerning Black Men & White Women (Several Friends, Killer Of Sheep, Mulatto Saga, The Annihilation Of Fish)