LOOKING FOR VALIDATION IN MEDIOCRE MOVIES...


So I noticed there's not a lot of folks of color and I thought I would like to give you my resume to give to Wes Anderson and just to let him know I'm available. - Whoopi Goldberg

On a recent episode of The View Whoopi Goldberg half-jokingly addressed guest Jason Schwartzman about the lack of Black people in Wes Anderson’s movies (Schwartzman is one of Anderson's stock actors). Sure, Whoopi technically said “folks of color” but she more than likely meant Black people. Anyone familiar with Anderson’s movies knows he has a partial boner for India so there’s almost always a splash of “color” in his movies. However there aren’t many black people in his movies as Whoopi pointed out. Ok... So? If he wanted more Black people in his movies at this point (almost two decades of filmmaking) he would have done something about it by now (personally I don't care. I just want the old Bottle Rocket/Rushmore Wes Anderson back).

And I don’t want to make Wes Anderson out to be the bad guy here. This is bigger than him. I feel like there aren’t many Black people in his movies simply because they aren’t in the specific upper-class society that he often explores. There’s nothing malicious in his casting (I'm willing to bet Whoopi is going to show up in one of Wes' movies now too). And realistically speaking, Black people would more than likely be the servants & sitters in his world so I actually appreciate his (unintentional) omission of Black people.

Let's be honest, in the real world Herman Blume (Rushmore), the Maplethorpes (Bottle Rocket) & the Tenenbaums would ALL have Black butlers, servants & nannies. In 2015 I'd much rather Black folks not be seen in certain movies rather than be seen as a maid or a butler.

Why do Black people continue to complain about their lack of representation in movies that are often mediocre or overrated? Remember that whole #oscarsowhite "movement" on social media a few months ago? That was all rooted in Black people wanting to be validated/recognized by white people. And what's even worse is that all of that validation rested on the shoulders of one pretty good movie (Selma).
I obviously understand where all this comes from. White people aren’t the only race on the planet yet a lot of movies, both mainstream & indie, would have you think otherwise. Black people, brown people and just people of color in general should all have some kind of substantial representation on film. But it’s 2015 and we’re still fighting the same battle. Maybe it’s time to take the hint, stop looking for validation from people that clearly aren't  thinking about us/you, and just focus on filmmakers that do represent people of color in some form (if Whoopi really wanted to beg for a part in a movie she should reach out to someone like Newlyweeds director Shaka King).
I found the whole interaction between Goldberg & Schwartzman to be both cringe-inducing & corny. If someone continues to not cast people of color in their movies (and it really bothers you) then stop supporting their movies and support (talented) filmmakers that DO show a wide range of “color” in their work. Don't ask to be cast in one of their movies! Seriously, Whoopi Goldberg, have some respect for yourself. You’re an academy award winning actress. You don’t need to half-jokingly beg Wes Anderson for a part in one of his quirky movies like some struggling actress.

I guess I shouldn’t be surprised as this is the same person who defended Mel Gibson after his racist telephone rant to his ex and defended Ted Danson’s blackface stunt.
I'd also be lying if I said this piece wasn't partially fueled by my disdain for a lot of Goldberg's more recognizable (and stereotypical) roles (I know this isn't a popular stance and any kind of harsh criticism of an aging actress/woman in this day & age is just asking for trouble but some folks need to be called on their shit). Next to Morgan Freeman & Scatman Crothers, she's got some serious Mount Rushmore-status "wise/magical black person" roles under her belt. Whoopi's stunt on The View came off like a scene in Bamboozled. 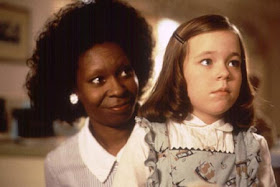 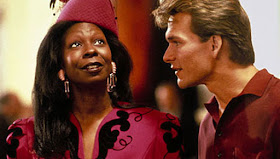 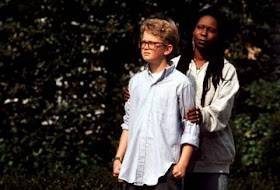 Normally I’d love to see a guy like Spike Lee call Goldberg out on all this but his own hypocrisy in recent years has reached a level where I can’t really listen to him anymore. Lee has never shied away from calling out everyone from Ving Rhames & Cuba Gooding Jr to Tyler Perry & The younger Wayans Brothers for what he felt was “cooning” or “selling out”...

(for those that didn't know, Spike Lee was going at Cuba Gooding Jr. & Ving Rhames in certain specific scenes in Bamboozled for what he felt was "selling out")

But for some reason a guy like Charles Barkley is exempt from Lee’s criticism. From Trayvon Martin to Michael Brown, Charles Barkley has clearly shown he doesn’t like young black people and has some serious self-hate issues he needs to work out. Instead of calling out Barkley on his self-hating racist bullshit (like he's done with others so many times in the past), Lee turned around and did a series of commercials with the guy who not only agreed with the George Zimmerman verdict, but called the Fergusson rioters “scumbags”. I know we all have contradictions as human beings but isn't there a limit? You can’t cry “Black Lives Matter” then do an endorsement deal with someone who clearly thinks the opposite. Seems a little hypocritical to me. Spike Lee is the same guy who cancelled an appearance at Hampton University at the last minute when he discovered some of the president's personal political views (I know this because I went to Hampton at the time and was one of the many disappointed folks that got stood up). Where is that same defiance with Sir Charles?

But this isn’t about Spike Lee. Let me leave him alone. He's busy crowdsourcing money from people to fund his movies when he has millions of dollars in the bank…


Anyway, shortly after that nonsense on The View I discovered a new video project, via Slate, where cinephile/video editor Dylan Marron chronicles the lack of dialogue delivered by actors of color in mainstream movies like Noah & Frances Ha (Frances Ha? Do you really expect to see that many people of color in the cinematic world that is France Ha?). This immediately made me think of how everyone was up in arms last year about biblical movies like Exodus (and Noah) featuring mostly white actors. Those movies didn’t even look good to begin with (seriously, Noah and/or Exodus could feature an all-star cast made up of Idris Elba, Kerry Washington, Cicely Tyson, Tyler Perry & Denzel Washington and it would still look terrible to me). And what’s strange is that some of the people who complained about the lack of “color” in Noah & Exodus are atheists that don’t even believe in God or The Bible. Why do you care about Black people not being represented in films (that aren’t even good to begin with) based on source material that you don’t even believe in and, more than likely, probably arrogantly dismissed in the past (I’m not a religious person myself but I think we know how arrogant & imposing some atheists can be about their own views, which makes them just as annoying as the religious folks they try to challenge).

At the end of the day, as a black person I’m glad we aren’t represented in films like Noah, Exodus or Grand Budapest Hotel. They aren’t that good.
Marcus at 3:01 AM
Share
‹
›
Home
View web version