THE CINEMA OF GUS VAN SANT TOLD THROUGH IMAGES & STILLS... 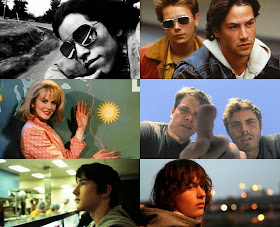 Once you're directing, you're kind of in a certain mode, where you're taking whatever is on the page and forming it into the film that you think it might want to be - Gus Van Sant


Although he’s one of the least explored directors on PINNLAND EMPIRE, Gus Van Sant is still a personal favorite of mine (whats strange is that for a GvS fan I can safely say I dislike 40% of his feature filmography and I'm indifferent towards another 20%). From low budget indie maverick (Mala Noche & Drugstore Cowboy), to mainstream academy award nominated director (Good Will Hunting & Milk), to slightly experimental improvisational art-house auteur (Gerry, Elephant & Last Days), Gus Van Sant has gone through quite a few different stages in his three decades of filmmaking.
I chose to explore Van Sant because ever since Milk (sorry, but I think The Times Of Harvey Milk is a far superior film and didn’t need to be revisited or "redone") I’ve been falling more & more out of love with his movies (I thought both Restless & The Promised Land were pretty flat) and I needed to remind myself why I loved his work so much (next to Abel Ferrara & Takeshi Kitano, this is the largest body of work that we’ve looked at so far and EVERY feature film is represented).

Also make sure to read the one & only Gus Van Sant review on PINNLAND EMPIRE which holds a special place in my heart: Gerry

When you think of the road movie genre, Gus Van Sant isn’t usually the first name that comes to mind (often times we think of folks like Jim Jarmusch & Wim Wenders). But every now & then Gus Van Sant’s cinema takes us across the American landscape (and sometimes beyond) in either a crappy car (Good Will Hunting), a second hand motorbike (My Own Private Idaho) or even on foot (Gerry & Even Cowgirls Get The Blues). At the end of Good Will Hunting, we see Matt Damon driving from Boston to Berkley to win back his lady. In My Own Private Idaho, he takes us from Portland to Italy and back. And hitchhiking is a huge part of the story in Even Cowgirls Get The Blues (the protagonist in the film lives a nomadic lifestyle)


Various Phases: Indie, Mainstream, Arthouse & Beyond...
Next to Richard Linklater & Steven Soderbergh, I can’t think of too many other modern American filmmakers that have gone through so many different style changes. Van Sant has the kind of filmography that makes you go “oh yeah, he did direct that, huh?” or “really, he directed that?” or “the same guy who made this made that??” As you’ll see in this write-up, GvS obviously has many common themes that run throughout all of his movies no matter how different they may be from each other, but he's proven that he can adapt to almost any style or genre.

The (usually naked or half naked) human body...


Homosexuality in mainstream cinema
Prior to Milk (a film about a gay activist); homosexuality was never really “the issue” or main focus in GvS' films. This is pretty progressive in my opinion and it continues down the path that Rainer Werner Fassbinder kinda pioneered in the early/mid-70’s (Fassbinder was another filmmaker to have homosexuality in his work without making it the main focus or “issue”). A lot of the characters in Van Sant’s films are either openly gay (My Own Private Idaho, Mala Noche, Even Cowgirls Get The Blues, Last Days, Milk) or questioning their sexuality (Elephant, My Own Private Idaho). And what’s more important is that his work has seeped its way in to mainstream cinema (along with the likes of Todd Haynes & Lisa Cholodenko) without having to compromise anything.


Surrogate families, father figures & mentors
Parents (especially fathers) of Van Sant's young characters usually aren't around (Finding Forrester, Goodwill Hunting, My Own Private Idaho, etc). And when they are, they're usually irresponsible (at the beginning of Elephant, one of the few adult characters in the film is seen driving drunk and is eventually reprimanded by his teenage son in a strange kind of role reversal) or they usually go unseen (almost all the adults in Paranoid Park are shown just off camera or out of focus in the background). Most of the his young characters are "on the outs" (Goodwill Hunting) or they live on the fringe of society (My Own Private Idaho & Drugstore Cowboy) and have to rely on each other by making a sort of surrogate family of brothers & sisters.

The presence of young people

As corny as it sounds, young people are the backbone of GvS’ cinema. Even the films that aren’t represented with images below (Mala Noche, My Own Private Idaho, Restless, Good Will Hunting, Last Days) feature young characters trying to figure out life or are coming of age just like the characters in the films shown below. From the music & clothes to skateboarding & slang, Gus Van Sant’s fascination with children, teenagers & young people is more than evident.

Dream zone achieved
Van Sant’s cinema sometimes features characters that are dreamers (Mala Noche & Even Cowgirls Get The Blues), deep thinkers (Finding Forrester) or are prone to zoning out or drifting off for various reasons ranging from drug use (Drugstore Cowboy) & narcolepsy (My Own Private Idaho) to dehydration from being stranded out in the desert (Gerry).

Influences, True Stories, Adaptations & Remakes
Like Stanley Kubrick (GvS’ personal favorite filmmaker), almost all of Van Sant’s films are derived from pre-existing books (Even Cowgirls Get The Blues, Mala Noche, Tulsa), true stories/true events (Milk, To Die For, Last Days, Elephant & Drugstore Cowboy) or older films (Psycho). But no matter what, he puts his own unique stamp on everything he does…