THE CINEMA OF KELLY REICHARDT TOLD THROUGH IMAGES & STILLS *UPDATED* 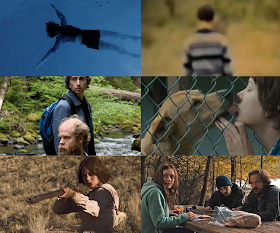 I don't know if I could come up with my own personal list of today's top American filmmakers right now (too many of them are too inconsistent, inactive or new these days), but if Kelly Reichardt were one of the names on someone else’s list, I wouldn't be mad at that. These days when I think of “American Cinema”, I think of stuff like Old Joy. In the last 8 years, Kelly Reichardt has explored everything from poverty (Wendy & Lucy) & “eco-terrorism” (Night Moves) to this country’s history (Meek’s Cutoff) & the importance of friendship (Old Joy). And what’s so great is that she touches on all these topics in a subtle/non-preachy way.

Kelly Reichardt has been one of the true MVP's this year here at PINNLAND EMPIRE so it’s only right that we explore her filmography.

THE GREAT OUTDOORS
It's no mystery that Kelly Reichardt's work (especially everything post-Old Joy) is rooted in natural surroundings. Nature, woods and just all things green are a noticeable backdrop in Ode which gives the film a calming vibe. In Old Joy we see our two characters driving through the mountains of Portland to find a hot spring (along the way they do things like hike, camp and just embrace nature). Around the time of Wendy & Lucy (2008) is when things got a little darker...
In Wendy & Lucy, nature becomes Wendy's home due to the fact that she's homeless. Instead of hot springs, mediation & heart-to-hearts by camp fire (as seen in Old Joy) Wendy is forced to survive in the woods. Survival became an even bigger factor in her next film...
Meek's Cutoff follows a group of travelers crossing the Oregon Trail and we see an even harsher side of nature (along the way our characters get lost, run low on supplies and are headed towards potential danger). It makes sense that her most recent film (Night Moves) deals with Eco-terrorists/extreme environmentalists who go to horrific lengths to protect the earth they love so much.

FOUR LEGGED FRIENDS...
Long before Night Moves, which opens with Jesse Eisenberg pulling off to the side of the road to help an injured animal, Kelly Reichardt has been an advocate for animal rights and just an overall love of animals since day one. If they aren't always present in the background of every other frame (Meek's Cutoff & River Of Grass), they're treated like key supporting actors (Old Joy & Wendy & Lucy)...

THE OPEN ROAD
With the exception of Wim Wenders, I don't know if any other country has mastered the modern road movie genre quite like America has (Jim Jarmusch, Alexander Payne, Monte Hellman, Bette Gordon, etc). Actually, some of Wenders' best road movies take place in America (Paris Texas and the first half of Alice In The Cities). Kelly Reichardt's work has taken us from the south (River Of Grass & Ode) to the northwest (Old Joy & Meek’s Cutoff). And like any road movie, her characters are using the open road to either run away from something (River Of Grass); start over (Meek's Cutoff & Wendy & Lucy) or for existential reasons (Old Joy).

I feel like Kelly Reichardt has quite a few subconscious influences ranging from Chantal Akerman to Gus Van Sant, but nothing seems more obvious than Terrence Malick (besides the visuals below, Reichardt utilized haunting voiceover narration with her first film)

FALSE PROPHETS/CHARACTERS FULL OF SHIT
I recently attended a Q&A with Reichardt and I asked her if the similarities between Harmon (Night Moves) & Meek (Meek's Cutoff) were intentional. I felt both characters, birthed from the same author and brought to life by the same director, talked a good game but were, as Reichardt herself put it, "full of shit". This was the validation I needed. Right when Reichardt made that statement about both characters being full of shit, it hit me that Kurt (Old Joy) is also another one of her characters that’s in the same boat. Throughout Old Joy Kurt talks so much about what he knows and gives off the vibe that he’s doing ok when in reality he's jobless, probably broke and living in his van. Meek is very similar. He talks about all his experience in the wilderness yet clearly gets the group of people he's supposed to be leading lost. Josh & Dena (Night Moves) hire Harmon because he's supposed to be a discreet marine with experience handling explosives, only to find out he's also an ex-con who doesn't fully know what he's doing.

COUPLES/PARTNERS IN CRIME
I’m not sure if this is intentional, but Reichardt focuses a lot on couples (Ode), buddies (Old Joy & Wendy & Lucy) or partners in crime (River Of Grass & Night Moves). I wouldn’t necessarily label her films as “buddy movies”, but there’s definitely that buddy/couple dynamic in most of her work, and she rarely focuses on just one lone person (an argument could be made that Wendy & Lucy is mostly about Wendy, but her dog Lucy was still very much her companion and an important part of the story).

A FEMALE'S PERSPECTIVE
I almost didn't want to include this category because I thought it would be a little cliché (a female director focusing on female characters & "female topics" from time to time). But some of the issues in her films are a little heightened because of the female protagonists.
Men don't have to deal with some of the same potential threats as women do who travel alone or are living out of their car like Wendy in Wendy & Lucy (Reichardt doesn’t play too much in to the dangers of being a female drifter, but she does include a few scenes that are gender specific to women in my opinion). Reichardt also challenges traditional characters like “the bored housewife” (River Of Grass); the young girl discovering her sexuality & attraction to boys (Ode) and the complacent old fashion wife whose supposed to know her place (Meek’s Cutoff).

TENSION
Although Night Moves is Reichardt's first official "thriller" with plenty of tense moments, it’s not the first time she’s shown serious onscreen tension. There's often some kind of unspoken tension between Reichardt's characters. Kurt & Mark (Old Joy) haven't seen each other in a while and they both have a lot to say to each other regarding their friendship, but they don't know how to address it (Mark always seems to have some kind of scowl or uncomfortable facial expression when dealing with Kurt). With the exception of ... all the other characters in Meek's Cutoff are afraid to come right out and call Meek on the lousy job he's doing in leading everyone across the Oregon trail, but it’s written all in their body language and facial expressions.

DREARINESS & LONELINESS
There's an understated bleak tone to most of Reichardt's work (that's not to say there isn't an element of beauty to everything she does). Her characters are either homeless (Wendy from Wendy & Lucy); on the verge of homelessness (Kurt from Old Joy) or lost, either literally (the character’s in Meek’s Cutoff) or figuratively (Josh & Dena in Night Moves).


This leads us to the final category…

OPEN ENDINGS
Reichardt’s last four films have ended on a sad ambiguous note. She often ends things giving off the vibe that her characters won’t be alright or are headed down a destructive, dangerous and/or sad path. The last time we see Kurt (Old Joy), he’s roaming the streets of Portland with no place to go. By the end of Wendy & Lucy, Wendy no longer has her dog or her car (which was technically her home); she barely has any money left and has no job prospects. Meek’s Cutoff is probably her most “notorious” ending as she ends the film abruptly without notice and leaves it to us to decide what everyone’s fate will be (which, in my opinion, isn’t looking too good).