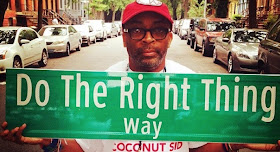 If you followed PINNLAND EMPIRE this summer then you know I was heavily immersed in the Spike Lee retrospective that went down at the Brooklyn Academy Of Music (to read about my awkward Red Sox hat encounter, click here). Spike showed up to BAM for the closing night film (Bamboozled) and before the movie started he opened the floor to the audience for questions concerning any & all things Spike-related. To no surprise, everyone in attendance used this golden opportunity to basically stroke Spike's already sizable ego ("thank you so much for all you've done") or to ask pointless questions ("would you ever consider doing a sequel to Bamboozled?"). I'd had enough so I raised my hand to ask what I felt (and still feel) was a good question. I asked him if, in 25 years, he felt that Wim Wenders finally "got" or understood Do The Right Thing.

For those that don't know what I'm talking about, allow me to explain the back-story...

In 1989 Do The Right Thing was the favorite to win best picture at Cannes, but Steven Soderbergh's debut feature Sex, Lies & Videotape ended up taking the top prize. Wim Wenders was the head of the Cannes jury that year and in an interview he mentioned how he felt that Mookie (the main character in Do The Right Thing) wasn't heroic, therefor he couldn't bring himself to pick Do The Right Thing for best picture. I'm sure this influenced other jury members to go with Sex, Lies & Videotape as well.
None of this sat too well with Spike Lee and he kinda half threatened Wim Wenders with a baseball bat in a post-Cannes interview.
Now...it was quite childish for a grown man to threaten another grown man over a movie dispute (no matter how important the movie is) but I kind of see why Spike Lee was pissed. If heroism was an important factor for Wenders in determining the greatness of a film, where were the "heroic" characters in Sex, Lies & Videotape? I don't mean to simplify things but the main characters in  that movie were an unfaithful husband (Peter Gallagher); a shitty sister (Laura San Giacomo), an uptight, slightly annoying prude (Andie Mcdowell) and a creepy drifter that got his heart broken who now "gets off" to videotapes of women talking about sex on camera (James Spader). Why bring heroism in to play when there really is none in the film that you picked to win?

But that's not to say Soderbergh's film isn't great just because there are no heroes. Sex, Lies & Videotape is pretty brilliant in my opinion. It may not have the same impact or "importance" as Do The Right Thing, but it's still a relevant film.

Actually, this brings me back to the question I asked Spike Lee.


Me: After 25 years do you think Wim Wenders finally understood Do the Right Thing? Do you think he now feels he made a mistake not picking your movie to win best bicture at Cannes? 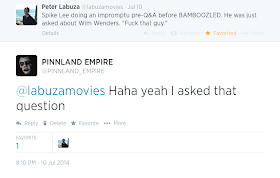 After that he went on a minor rant (he didn't raise his voice or anything tho) about not winning best picture at Cannes in 1989. I didn't know my question would trigger that much annoyance in him. He started to rant so much that he veered off and went from (understandably) insulting Wim Wenders to essentially insulting Sex, Lies & Videotape and it's legacy (he also shat on Driving Miss Daisy in the middle of all that which is just fine with me. Fuck that movie). Spike said something along the lines of: "25 years later, no one is talking about Sex, Lies & Videotape" (of course the mostly pseudo bohemian Brooklyn-based audience mindlessly agreed with Spike Lee's sentiments, even though I'm willing to bet half of them never even saw Sex, Lies & Videotape).

Again, I don't personally think Sex, Lies & Videotape is as "important" as Do The Right Thing, but it did make a dent in modern film (I'm not gonna list all the awards & accolades. Its legacy speaks for itself). For Spike Lee that is unnecessary.
Lets not forget that Steven Soderbergh is/was a huge cheerleader for Spike throughout his career, and he also donated $10,000 to Spike's recent kickstarter campaign for a movie that has yet to get a good review from a "reputable" critic or any movie-goer period (I could go on a whole separate tirade about certain specific millionaire filmmakers using money from regular every day people to fund their so-called personal projects, but lets maybe save that for another date...)

Is Spike Lee still that bitter after all these years?? It's hard to tell because he has this passive/aggressive "I don't care" attitude, yet he goes on mini-rants still, in 2014, about not winning an award 25 years ago. He has to see big picture. We celebrated the 25th anniversary of Do The Right Thing in New York City all summer it seemed (the city of New York even renamed a street in Brooklyn "do the right thing way"). The movie has solidified its position in cinema history. Is there still the need to hold a 25 year grudge?

Perhaps Spike Lee got caught up in the moment, wasn't prepared for my question (no shots) got emotional and said a few things he didn't mean. Lets not front like we all haven't said things we didn't mean due to emotion, anger, long windedness, being put on the spot etc. But to say no one is talking about Sex, Lies & Videotape, as if it isn't relevant anymore, is just ridiculous. I used to think Sex, Lies & Videotape was an overrated & underwhelming movie when I was younger (as a kid I was expecting it to have a lot more sex with a title like that). But like Old Joy, The Son, Solaris (2002) & Ghost Dog, I eventually grew to like it the older I got. Sometimes maturity & experience in your personal life can get you to reevaluate your stance on certain things. Anyone (especially a sensitive man) who's ever had their heart broken by someone can relate to Graham (James Spader) in Sex, Lies & Videotape on some small scale (I know he's a little dramatic and maybe pretentious, but still...). I have no shame in saying that I can relate to Graham on some (very small) level. I've had my heart broken before and in turn I did some small stupid self destructive things (although I didn't start videotaping random women talking about sex for personal use as a coping mechanism to deal with my heartbreak like Graham did in Sex, Lies...).

Bottom line - Spike was wrong for saying what he said about Sex, Lies...
I wish he took my question differently. Do The Right Thing is a film about the relationships between various races in New York City. The race relations Spike Lee explores are pretty specific to a certain area/part of this world. Perhaps Wim Wenders, a German, wasn't familiar with what was going on in New York City at the time (not making any excuses for him) and that's why he didn't understand the message that Spike Lee was trying to get across. Wenders has been pretty outspoken about his distaste for violence in cinema (not only does he have a movie called The End Of Violence, but apparently he walked out of the Funny Games screening at Cannes in '97 because he was too disturbed by it). Maybe the last 30 minutes of Do The Right Thing was just too much for him to handle. I dunno...

Personally, I think a documented/filmed sit down between Spike & Wim would be a unique way to commemorate the 25th anniversary release of Do The Right Thing. It would serve as a nice mediation between the two important filmmakers and maybe Spike could shed some light on what Wim may have misunderstood (perhaps Steven Soderbergh could mediate the sit down). But judging from Spike Lee's response to my question, I doubt that will happen (I want it to be known that if this ever does happens in the future, that idea came from here).
Marcus at 3:02 AM
Share
‹
›
Home
View web version