THE CINEMA OF HAL HARTLEY TOLD THROUGH IMAGES & STILLS...AND VIDEO 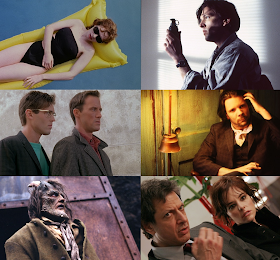 For me the fun in making motion pictures is in trying to make the invisible tensions and connections between people visible through activity. When the boy places his hand on the table and the girl removes hers and returns it to her lap – what’s that mean? Depending on what’s been going on previously, it can mean anything. It’s almost like composing music. I treat dialogue the same way, as activity. And people do evasive things when they’re using words to communicate - Hal Hartley (Curnblog)

Whether you're a fan of Hartley's work or not, there's no denying that he was one of the most unique voices to emerge during the American indie renaissance of the late 80's/early 90's. His influence over the last two decades may not be so obvious to some but he still made a small dent in indie film. Watch how the dialogue is delivered in an early Hal Hartley movie then go watch Clerks. Watch Trust, Simple Men or Henry Fool then go watch something by Miranda July (Me & You & Everyone We Know), Bob Byington (Somebody Up There Likes Me) or just about half the stuff that plays at SXSW, IFC or The Angelika and tell me he hasn't had some kind of an impact on filmmakers who came after him. My love for the cinema of Hal Hartley brings out the angry movie snob in me from time to time. I sometimes lose count of how many illegitimate children Hartley has running around the American independent landscape trying to imitate or emulate his work. That's not to say Hartley doesn’t borrow or tip his hat to filmmakers who came before him either (as you'll see in this write-up) but the amount of young modern filmmakers who emulate, borrow & steal from him today is too evident to ignore (sometimes I feel like I'm alone on this).

This cinema off... entry has been on ice for quite some time. Since this series got underway it was always my plan to do one on Hal Hartley but his filmography is pretty dense (these explorations take a lot of time that I don’t really have these days). But I was finally able to gather all the images, print screens & video clips that I feel best represent his work...

Literature might be one of the top three driving forces in the cinema of Hal Hartley and is one of the few elements that still remains constant in his work to this day. Whether degenerate (Henry Fool), saint (Beatrice in No Such Thing), know-it-all bratty teen (Audry in Unbelievable Truth) or former athlete-turned anarchist (William McCabe in Simple Men), the characters in Hartley's films are always reading or live their life by some prolific excerpt they read somewhere. Some of Hartley's films are even directly inspired by or loose remakes of famous books like The Bible (The Book Of Life) or Beauty & The Beast (No Such Thing)

UNDER THE INFLUENCE...
Booze is another driving force in Hartley's work. This is something that usually gets overlooked. In the back-story for Unbelievable Truth, Josh Hutton kills his girlfriend in a drunk driving accident, Matthew Slaughter and Maria’s mother have a drinking contest for Maria’s "freedom" in Trust, there's a scene in Simple Men where the five main characters get drunk together in an effort to bond, and lets also not forget two of Hartley's most notorious characters are full-fledged alcoholics (Henry Fool and the monster from No Such Thing).


LOVE & ROMANCE
Although a lot of the characters in Hartley's films are dumped (Surviving Desire), lied to (Simple Men) or cheated on by their significant others (Flirt), love (along with passion, desire & romance) is a constant theme in his work starting with Unbelievable Truth going all the way up to Fay Grim.

RELIGION & CHRIST-LIKE FIGURES
I know this category is starting to get a little played out, but unlike Abel Ferrara & Carlos Reygadas, Hartley Genuinely seems like an atheist yet the presence of religion flows all throughout his work. He even did a modern re-telling of the last day on earth with The Book Of Life featuring Martin Donovan as Jesus. I think there's a priest, nun, rabbi or minister in almost every one of his feature films.

Outside of Martin Donovan as Jesus, Hartley sometimes momentarily turns some of his normal human characters in to Christ-like figures as well. At the start of Henry Fool, Simon practically kneels at his feet and their relationship eventually turns in to that of a prophet (Henry) and a disciple (Simon).
After Beatrice survives the grueling surgery that should have killed her in No Such Thing, all the locals in the village touch her in disbelief as if she rose from the dead. And the final pose in the dance sequence in Surviving Desire is pretty self explanatory...

QUIRKY VIOLENCE
Although Hartley doesn't specialize in action movies (or any other traditionally violent movie genre) he certainly makes guns prevalent in damn near every one of his films post-Surviving Desire. Given Hartley's unique style and quirky world view, he makes the audience see the pointlessness that comes along with violence. When someone holds or shoots a gun in one of his films there's this almost apathetic/mechanic-like action to it to the point where its kinda funny (Damien Lewis shooting the hitman at the end of Amateur or Jeffery Howard firing a pistol off in to the air in Simple Men).
But that's not always the case surrounding a violent death in Hartley's work - Martin Donovan's death at the end of Amateur as well as Kevin Corrigan's death in Henry Fool are far from humorous...

SONG & DANCE
Music is also quite prevalent in Hartley’s work. If there isn’t some kind of a choreographed dance sequence (Surviving Desire & Simple Men) at least one of the characters in his films are playing some type of instrument. And like John Carpenter or Shane Carruth, Hartley often composes his own music for his work…

You can write about Hal Hartley all you want but his unique style can't be fully conveyed through words or even images. This is one of those rare cases where you need video examples to show things like the deadpan delivery of his actors to the repetition of is dialogue...


INFLUENCES
Besides the obvious Godard influence, Hartley draws inspiration from plenty other (mostly European) filmmakers like Bergman & Bresson. In fact, Hartley was once dubbed the Jean-Luc Godard of Long Island… 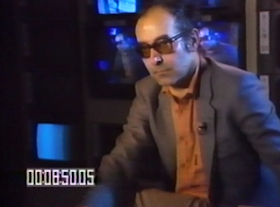 
Nothing like a machine to make a man feel insignificant... (excerpt from Simple Men)

In almost every Hal Hartley film we get at least one scene of a character struggling to understand some form of new technology or trying to fix some kind of broken appliance. And on the flip side, there’s usually a genius close by who knows how to fix something with ease (Matthew Slaughter in Trust, Bill in Simple Men, etc). It should also be noted that Hartley was showing laptops in film as the portable devices they really are long before other filmmakers jumped on board.

GLOBALIZATION
In the 2nd half of Hartley’s career, his films have taken us across four continents. Along with Jim Jarmusch, Hal Hartley is one of the last American filmmakers to embrace globalism and show the world as the multi-national/multi-lingual planet that it really is

Dear Jim, it was real difficult to get a taxi to the airport because some terrorists threatened to blow up all the bridges leading out of Manhattan. So I tried to take the subway but a religious group had set off nerve gas on the train and we were evacuated before I even got ten blocks...Waiting on line at the airport I saw two men get caught trying to smuggle radioactive materials out of the country. It’s like my mom use to say; The world is a dangerous and uncertain place - (excerpt from No Such Thing)

Ever since 9/11, the presence of police, terrorism & authority figures has been at an all-time high in his cinema. In fact, one could say The Book Of Life & No Such Thing were precursors for 9/11...