MANIAC: THIS MOVIE HAD NO BUSINESS BEING THIS GOOD

What if the driver character from Drive, only this time played by Elijah Wood instead of Ryan Gosling, was a tormented serial killer with social anxiety disorder and mommy issues in the vein of Buffalo Bill (The Silence Of The Lambs) or The Tooth Fairy (Manhunter)? Sounds strange right? That's pretty much the vibe of the 2013 Maniac remake...
I was going to wait to write about this for my end of the year review, which I’ve been working on steadily these last few weeks, but Maniac kinda deserves its own separate write-up. Its an interesting film to say the least. Even though it doesn’t exactly fit right in with stuff like House Of The Devil & The Innkeeper, which I’ve also recently watched at the suggestion of PINNLAND EMPIRE contributor; Doug Frye, Maniac is another example of this new resurgence in 70’s & 80’s-style horror/slasher films.
Criticisms of the Maniac remake ranged from; "Why remake a cult classic?" to "Elijah Wood as a serial killer? Yeah, right..." Let’s get a couple of things clear - The original Maniac isn’t very good to begin with. Sorry, but it's not. It isn’t some sacred cow that shouldn’t be messed with. Sometimes bad movies are mistakenly labeled as "cult movies" which gives them a free pass to be...bad. "Who cares if there's a boom mic in the shot? It’s a cult movie!" or "So what if the acting is a little bad. It’s supposed to be. It’s a cult movie!" And that’s certainly the case with the original 1980 Maniac – the simple story of a schizophrenic serial killer, "Frank Zito", who targets women. In my opinion, this new adaptation stays true to the basic plot but does make a few noticeable changes, specifically the cinematography which is shot directly from Elijah Wood's point of view half the time just like Enter The Void except not as shaky & nauseating (we only see Wood in reflections and through the point of view of the women he’s killing). I'm not exactly sure what’s so “classic” about the original (and yes, I've heard it referred to as a classic before). It’s a movie about a guy who goes around killing women. There were far too many films in the early 80's that essentially made entertainment out of violence against women at a time when real violence against women seemed to be at an all-time high: Maniac, Henry, Angst, White Of The Eye, etc. Sure some of these films are actually pretty good (White Of The Eye & Angst) but at the end of the day there’s a slightly sadistic quality to all of ‘em. The only two filmmakers to really counter this explosion of early/mid-80’s violence against women were Abel Ferrara with Mrs. 45 & Bette Gordon with Variety (the irony of course is that prior to Ms. 45, Abel Ferrara made The Driller Killer which kinda fits right in with the aforementioned films I’m criticizing). Oh wait, does Death Wish count?
Its nice to see this story redone in a different era with a slightly different twist to it. Sure, at the end of the day filmmakers should look to an original idea first before doing a remake but not all remakes are actually bad (Let Me In, Solaris, Funny Games, etc). More times than not, remakes do turn out to be pointless or not as good as the original but if we blindly hate on every remake before we actually see it, we could miss out on the occasional gem. I honestly couldn’t imagine life without watching Soderbergh’s adaptation of Solaris from time to time.


As far as Elijah Wood playing a serial killer goes - you DO realize that most serial killers (outside of figures like Edmund Kemper or Richard Ramirez) usually don’t look the part, right? If you saw Jeffery Dahmer or Charles Ng on the street you'd probably walk right past them and not think anything or assume they were wimps. So casting the non-intimidating Elijah Wood in the title role of “Frank Zito” makes perfect sense (I just hope Wood didn't think by doing a dark indie that it would make him seem edgy or show his range as an actor. I seriously hope not). Right off the bat this version of Maniac has something over the original. The original “Maniac” in the 1980 film, played by Joe Spinell (the late iconic character actor from The Godfather 2, Cruising & the Rocky films, who also wrote the original Maniac story) was a big menacing guy who looked like a legitimate serial killer to begin with. If someone, especially a woman walking by herself at night, saw him they’d immediately cross the street or even run. In real life he wouldn’t get the chance to get close or ask a woman for the time in an effort to get her guard down and chloroform her. That’s what makes Elijah Wood such a good casting choice. He’s the last person you’d expect to be a serial killer. He has a way better advantage at getting close to women which the film plays off of. In this updated version of Maniac, Frank uses speed dating & online dating as a way of getting close to women. Ladies, be honest – if you went to a speed dating function or saw a picture of Elijah Wood on a dating site, you’d let your guard down at the sight of that face, wouldn’t you?
And lets also not forget that Wood played "Kevin" in Sin City back in 2005 so this isn’t his first time playing a psycho serial killer who targets women. There are actually quite a few similarities between Frank & Kevin. Not only do they target women exclusively, but they also behead them. In Sin City, Kevin/Wood is surrounded by his headless victims as trophies. In Maniac, Frank/Wood surrounds himself with female mannequins as well as a trophy room full of his female victims’ heads...

I admit that I quickly dismissed Maniac when it played at IFC this past year (I was intrigued for a second but that curiosity soon went away). But after hearing how surprisingly not bad it was by a few reputable sources, I gave it a chance on Netflix instant and it actually didn’t suck when it damn well should have. I know a movie shouldn’t get praise for not sucking, but this really had no business being a good/entertaining film and it was. So many odds we stacked against it and managed to rise above. ...Kinda. Unlike the original, this version of Maniac is slightly tongue in cheek and intentionally cheesy at times which makes it easier for me to enjoy it. This isn’t exactly a dark comedy, but the filmmakers & cast clearly had a hidden smirk on their face while making this. They had to. The acting is over the top, the delivery of Wood’s dialogue sounds like its being read directly from a piece paper and the scenarios in the film seem intentionally cliché – The women that Wood goes on (first) dates with invite him up to their apartments way too easily. I don’t care if the character Wood is playing seems harmless. I find it hard to believe that so many women would be so quick to hook up with a random stranger. And are women still seriously walking alone in dark alleys in movies these days? There’s too many intentionally weak points in the story for this to be taken 100% seriously (I’m afraid to read any interviews on this film out of fear that filmmaker; Frank Khalfoun really does want us to take his Maniac remake completely serious).

The synth-heavy soundtrack, which is very reminiscent of Drive, makes it even more enjoyable. I recently wrote another installment in the “Whole History Of My Life” series for The Pink Smoke on Nicolas Winding Refn’s underrated Fear X, so I’ve been immersed in his cinema for the last couple of months (I ended up writing so much unused/excess material for the Fear X piece that it turned in to a separate review on his Pusher sequel which you’ll read in January). Whether you like Refn or not, Bronson & Drive have been quite influential in the last couple of years and Maniac is a prime example. Besides the synthesized score (analog synths are making a comeback in cinema), just look at the movie poster. Doesn’t this remind you of Drive? 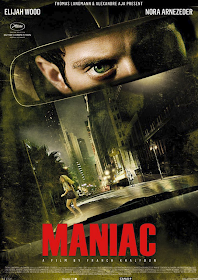 I realize that being influenced by Refn really means that you’re influenced by early Michael Mann, but most people are turning to Drive quicker then they’re turning to Thief & Manhunter. No, I guess that’s not a good thing, but it is what it is…

I'm still a little torn about this film because no matter how tongue-in cheek or aware of itself Maniac may be, it could still be seen as sexist entertainment as the story is still based around a serial killer who targets women. There's even those cliché scenes, which we see in almost every single serial killer film, where the psycho protagonist has the tormented flashback of his dysfunctional mother and we're almost supposed to feel a little sympathy for him and understand why he became a serial killer in the first place. Part of me also feels like Maniac is not only trying to capitalize off of Drive but it’s also stealing a few pages out of American Psycho (crazy angry white guys killing women) as well as Enter The Void. Refn isn’t the only modern filmmaker to put an emphasis on dark lighting, neon-lights & synthesizers. In my opinion, the cinema of Gaspar Noe, although less “popular”, has a connection to Refn’s work in terms of style.
But at the end of the day this film managed to be pretty good when it should have been awful. I've actually watched it twice so that counts for something.
Marcus at 6:01 AM
Share
‹
›
Home
View web version