The Elephant Man is tough to place among the other movies in David Lynch's filmography because even though it’s really good, it doesn’t really feature his trademark quirky surreal/neo-noir style as prominently as his other work. Over the years there's been some odd choices in directors to make films outside of their comfort zone (most notably David Cronenberg's offer to direct Ferris Bueller's Day Off). This isn't the strangest example but at the time it was a bit strange for David Lynch to be making this. Before The Elephant Man went in to production, the higher-ups at Paramount must have been asking themselves what the hell they were doing putting out a biopic on John Merrick Directed by an experimental, up & coming director (Lynch) produced by (comedian) Mel Brooks. Say what you want about movie studios but this was actually a case of "mainstream cinema" taking a gamble on a young progressive director. You have to remember that in 1980 David Lynch wasn’t the Twin Peaks creating, pop culture oddity that we know now. At that point he was a new director responsible for a handful of experimental shorts and one feature-length film that was embraced more by the cultish midnight movie crowd. And Mel Brooks' career speaks for itself. Dramatic biopics weren't exactly his thing which is why he downplayed his involvement in the film until after it was complete.

I guess If you absolutely had to categorize David Lynch at that point in his career he'd be considered a horror director...? Obviously we aren’t talking about the traditional horror directors of the time like Carpenter or Hopper but Eraserhead (one of my favorite films) and The Grandmother (one of my favorite Lynch shorts) haunt my dreams more than Michael Meyers or Leatherface. I get the idea of hiring a “horror director” to do a movie like The Elephant Man as it involves startling scenes and extensive make-up that would transform someone in to an “oddity” but that’s a touchy subject because it poses the question: Is John Merrick a "oddity"? Of course he's not. To quote John Hurt in The Elephant Man: "He's a human being!” But when you associate him with the baby from Eraserhead and use the term; "horror" in the advertisements, you're not only asking for trouble but you're obviously giving off the wrong impression of what the movie is going to be. Every once in a while I come across reviews that make comparisons between Elephant Man & Todd Browning's Freaks and although there are a few legitimate comparisons between both films it still bothers me to associate the term "freak" with John Merrick...

At first glance one would think the only thing The Elephant Man has in common with Lynch's other work is the black & white cinematography and its use of make-up & prosthetics. But the more you watch the more you may come to realize that from the film's surreal opening sequence (which also has some seriously disturbing sexual undertones), to all the surreal "interlude" shots of factories, pipes & industrial noises (all key elements in the world of David Lynch), The Elephant Man is just as much a David Lynch film as Blue Velvet or Lost Highway. Actually, the dream sequences from The Elephant Man went on to influence parts of Blue Velvet (specifically Jeffery Beaumont's first dream after witnessing Frank Booth for the first time).

In The Elephant Man we follow the final days of John Merrick (John Hurt) through the eyes of Dr. Frederick Treves (Anthony Hopkins) form an abused circus sideshow freak to a medical anomaly. After seeing Merrick ("The Elephant Man") at a circus, Treves takes it upon himself to try and help Merrick by looking after and studying him. The film's most interesting angle is Dr. Treves' early treatment of John Merrick. Although his intentions are good, he's no different than Merrick's previous owner who paraded him around as a sideshow attraction. Only Instead of the circus, Treves parades him around and shows him off to the medical/scientific community almost as a found object instead of a person. After a reality check from one of his nurses, Treves’ treatment of Merrick changes.
The Elephant Man isn’t exactly a horror movie but it certainly has its share of startling and/or shocking moments. For the first quarter of the film Lynch intentionally keeps Hurt/Merrick under wraps or in the shadows. We only get quick glimpses of his deformities or see the terrified facial expressions of those who look at him for the first time... 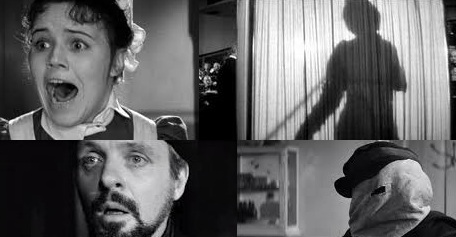 The Elephant Man went on to compete against Raging Bull at the academy awards which is probably the only time two filmmakers like David Lynch & Martin Scorsese would draw so many parallels between one another. Obviously The Elephant Man & Raging Bull don't have the same spiritual connection as stuff like Blue Velvet & Something Wild or Lost Highway & Crash (1996) but both films are artistic, black & white biopics (both featuring crucial scenes shot similarly in slow motion) that represent high points in both filmmakers' careers released in the same year.
Lynch's history as an academy award nominated director is quite similar to Scorsese's. Prior to The Departed & Hugo, much fuss was made about the number of times Scorsese had been nominated yet never won but Lynch was only one winless nomination behind Scorsese for quite some time.

I know this may seem like an odd choice for my first official Lynch review but this is one of those films that grew on me the older I got (it's also technically the first David Lynch movie I saw). The Elephant Man is proof that David Lynch can straight up direct a film without relying on his surreal quirkiness. And that’s not too say I don’t love Lynch's quirky style. Eraserhead & Blue Velvet are two of my all time favorite films, I think Mulholland Drive is one of the five best films of the last decade, and his last film inspired the name of this very site. But the surreal randomness in his work can sometimes work against him and distract viewers who may not necessarily like that kind stuff. No matter how great a film Mulholland Drive is, people get way too caught up in how weird and strangely humorous it can be at times to realize that not only is it a tragic story on multiple levels (broken dreams & a failed relationship) but its inspired by real events. Same goes for Twin Peaks - sure it’s odd and has humor (although the movie prequel is damn near completely the opposite of that) but it’s also a story about incest & sexual abuse.
The Elephant Man isn’t a fluke/one-time occurrence either. The Straight Story, a film that even some Lynch fans forget exists, is another example of his ability to tell a straightforward story without imposing his style all over the film when it isn’t needed. The Straight Story wasn’t even stylized like The Elephant Man. With the exception of Harry Dean Stanton's presence and a re-occurring shot we commonly see in all of Lynch's work (a first person perspective shot of a road at night) you'd have no idea it was directed by Lynch.
As a David Lynch fan who sees beyond all the dark quirkiness hes known for, I find myself openly praising his work less & less due to the large majority of so-called David Lynch fans who cant hold a conversation about his work beyond how "TOTALLY WEIRD" it is. I just don't wanna be grouped in with people like that. I'm not so pigheaded that I don't see his main appeal is how odd his films are, but he brings a little more to the table than dancing midgets and log ladies. I am more a fan of the Lost Highway/Mulholland Drive David Lynch but the over-analysis of those films by bloggers & critics has gotten to the point where I role my eyes at most new reviews & write-ups of those films.
The Elephant Man wouldn't be my #1 suggestion as an introduction to the world of David Lynch but it should be seen at some point on life.