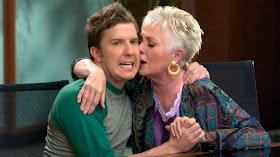 It takes a lot for me to watch ANY post-Billy Madison/Happy Gilmore Adam Sandler-related movie. I know Sandler only produced Grandma's Boy but his name was still all over the advertising which was enough to keep me away for almost two years before finally watching it thanks to the persistence of my friends who just knew I would love this movie. Ever since the late 90's, Allen Covert (star of Grandma's Boy) and the rest of Adam Sandler's “J.V. team” made up of; Peter Dante & Jonathan Loughram, have been playing the background in all of his shitty films. By 2006 it was time for Sandler to step aside and give his friends the spotlight. There were elements that coulda made this a disaster - mostly unknown/secondary actors who at that point had only been in bad movies, an appearance from Rob Schneider (sorry, but he just isn’t funny to me) and not only was this film associated with Adam Sandler but there was the strong possibility that he'd have a cameo too (thankfully he didn’t). But at the same time what did Happy Madison productions seriously have to lose? Grandma's Boy was only made with a 5 million dollar budget (which it DID recoup BEFORE DVD sales, thank you very much). That’s just a fraction of what Sandler's other films cost to make. Let’s face it - this movie is a winner. It’s probably one of the last great American comedies along with Harold & Kumar and The Footfist Way. I understand that a small film like Grandma’s Boy would be downplayed or forgotten about in a year where we saw bigger stuff like The Da Vinci Code or An Inconvenient Truth released, but 7 years later after all the dust settled – do you hear anyone talking about either of those films? They don’t matter anymore. I think it’s pretty clear that Grandma’s Boy stood the test of time. Do you see me writing about The Da Vinci Code? No. Grandma’s Boy is so great that it even gets a pass on the not-so subtle racism that we witness during the last half of the film (there’s a random African Bushman character that’s clearly modeled after the pro wrestler; Kamala). Now, Grandma’s Boy isn’t without plenty of cringeworthy & hack moments like monkey humor (literally) & typical stoner jokes (I’m not a smoker so that kinda humor doesn’t always work on me). There’s even moments where you can seriously tell a particular scene shoulda been re-shot due to bad acting, bad timing, badly executed jokes & awkward moments but overall - the good elements of Grandma’s Boy greatly outweigh the bad.

It seems like more knowledgeable cinephiles & film lovers like myself are becoming more open about their love for stupidly brilliant comedies. I won’t name names but I know specific people reading this right now who have the same love for the films of Kubrick & Cassavetes as much as they do for Saving Silverman & Dr. Detroit.

2006 was a great year for dumb guilty pleasure comedies - Grandma's Boy, Beerfest, and the highly underrated Lets Go To Prison (sorry but that was funny too me as was its follow-up; Brothers Solomon). Had it not been for Grandma's Boy, Sandler wouldn’t have one credible title to his name in the last decade (outside of Punch Drunk Love which really doesn't count). The actual plot to Grandma’s Boy doesn’t even really matter all that much but if it’s really that important to you - it’s the story of a former accountant turned video game tester ("Alex") who has to move in with his Grandmother and her two other elderly roommates after he gets evicted from his apartment due to his former roommate secretly using their rent money on hookers. Even though he has his issues living in a house full of old women (one of which is convinced he’s gay), he's pretty content with his rent-free, video game playing life (he's even secretly working on his own video game). Conflict arises when his boss; “JP” (a computer nerd who thinks he’s Keanu Reeves from The Matrix) steals Alex’s video game idea for his own. Now Alex’s grandmother (the only other person who knows how to play the game) has to face off against JP for ownership. Grandma's Boy is pretty much every man's dream - a movie about a guy in his mid-30's who lives rent free at his Grandmother's house, works as a video game tester and gets the girl in the end. Does life really get any better than that? And not to get too serious about a movie like Grandma's boy but it does touch on how a lot of adults in their late 20's/early 30's feel about employment - fear of responsibility, monotony of office work, etc (I know that's how I'm feeling these days). Although I'm not in to video games, Grandma’s Boy features so many things I like or find hilarious in one package - Kevin Nash (one of my all time favorite professional wrestlers), a pre-Bucky Larson Nick Swardson and the kinda lines that are funny weather they're in or out of context like; "I can’t believe you came on my mom", "Eat that frog dick, Timmy", "You’ve been spending our rent money on Filipino hookers?" & "YOU’RE a hooker!" David Spade’s cameo alone as the angry Vegan made up for the awful Benchwarmers, another Adam Sandler-related disappointment that’s unfortunately associated with Grandma’s Boy that came out in the same year. But I guess we shoulda seen that one coming given it stared Napoleon Dynamite & Rob Schnieder. And Benchwarmers isn’t the only disappointment that taints Grandma’s Boy’s legacy. Strange Wilderness, the unofficial sequel to Grandma's Boy that features half of its cast, was a huge letdown. Fans of comedies like Grandma’s Boy, Superbad, Beerfest & Super Troopers were expecting greatness from Strange Wilderness but what we got were two laughs (three if you’re being generous) in 80-something minutes. Now, Grandma’s Boy IS an acquired taste. If you like dumb yet awesome comedies, films like The Wizard and your Grandmother, then this is a winner. If you take yourself or your status as an uppity film snob too seriously then you should probably pass. Personally I think we all need a comedy full of dick & boob jokes from time to time.