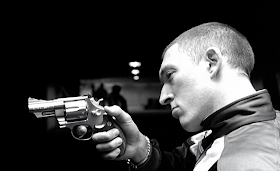 Well, we've reached the Top 10 of our favorite movies of the 90's list over at the pink smoke. And although each post is a surprise to all the contributors and we're never quite sure what the rankings will be or what movie made it, I think it’s safe to say that Mathieu Kassovitz' directorial debut; La Haine didn’t make the cut. Like What Happened Was, another great film that got snubbed which I was given the chance to write about last month, I really feel this was an important film from the 90's (and not just on the political tip). Europe, especially the UK, saw many documentaries on the subject of hip-hop but La Haine may have been the first major (fiction) release where hip-hop played a major role. At its core, the film is more politically fueled than anything else (racism, riots, poverty, police corruption & brutality, etc) but director Mathieu Kassovitz carefully places just about every element of hip-hop culture throughout the film from start to finish. Great filmmaking and a true representation of hip-hop culture are two entities that rarely cross paths but La Haine is an exception. Within the first few seconds of the film's opening we see a graffiti tag. Graffiti is an important factor in La Haine. There’s non-stop tags & throw-ups all throughout the film that usually read; "Fuck The Police". There’s a key scene where a DJ (popular French DJ; “Cut Killer”) is in his bedroom scratching the phrase; "Fuck The Police" with his speakers facing out the window. And there's another crucial scene where we see a group breakdancers performing just before a police raid. As you can tell, La Haine, which was made as a response to all the police brutality that was going on in France during the early 90's (where mostly youth of color were the victims), has a very anti-police tone. Anyone who knows anything about Hip-Hop knows that it’s very anti-police. No matter how much La Haine may be affiliated with "art house"; it’s still a hip-hop film. This aspect of the film was greatly overlooked upon its release (still kinda is to this day actually) because most film critics & film elitists aren’t that immersed in hip-hop culture and don’t know how to comment or write on it. Plus the political angle is so heavy that it’s easy to focus more on that than anything else. Critics were so oblivious to rap & hip-hop culture that they failed to call out the parallels between La Haine and Ernest Dickerson's Juice (a cult/iconic film in hip-hop). Both films are socially & politically fueled stories about a group of young irresponsible & carless teens on the run from police with scenes that highlight DJing/scratching, graffiti & breakdancing. And what’s so original about both films is that Dickerson & Kassovitz chose to intentionally NOT focus or highlight rap (obviously the most popular & recognizable element in hip-hop) and put a spotlight on the other three elements (DJing, Breakdancing & Graffiti). I'm not saying Mathieu Kassovitz tried to copy Juice (he may have very well not even seen it) but the similarities between the two films are pretty uncanny.

Was La Haine hip hop's first full-on venture in to the world of (good) art house film? I'm well aware that over a decade ago the downtown nyc modern art scene embraced films like Wild Style, Downtown '81 & Style Wars because of the graffiti aspect and Rammellzee had a cameo in Jarmusch's art house masterpiece; Stranger Than Paradise (along with commercial attempts to cash in on the Hip-Hop/Graffiti craze like Turk 182 which, in opinion, owes true graffiti artist; Taki 183 royalties), but I cant think of a true hip-hop film that got the kinda worldwide exposure & recognition that La Haine got at the time of its release (the scene where our three main characters in La Haine go to the art museum is very reminiscent of the scene in Wild Style where Fab 5 Freddy & Lee go to the upscale party full of rich artsy elitists)... 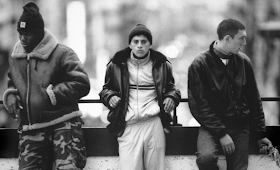 Mathieu Kassovitz may be multi talented (actor,
writer, director) but due to his post-La Haine work, as a director he joins the ranks of other "sellout" filmmakers like Neil Labutte, John Singleton, David Green, etc. Cut it any way you want but you can’t go from In The Company Of Men to Death At A Funeral (Labutte) or All The Real Girls & Snow Angels to The Sitter (Green). It’s hard to believe the director responsible for Gothika & Babylon AD is also responsible for one of the best and most socially conscious films from the 90's. Only recently has Kassovitz returned to more politically fueled work. La Haine centers around three best friends, each of a different nationality/ethnic background, over the span of a 24 hour period, living in the midst of a very volatile time in Paris - Said (Arab), Vinz (Jewish) & Hubert (West African). Said is the small, talkative, almost comedic relief of the group, Vincent is the more angry & hot-headed of the three, while Hubert is the most level headed and is pretty much the leader. After one of their friends/acquaintances is killed under shady circumstances during a riot, Vinz gets a gun and makes a pact with himself to kill a random police officer before the day is over. During the course of the film they run from the police (Said & Hubert eventually become victims of police brutality), get caught up in a riot, steal a car, crash an upscale party and have a run-in with a gang of skinheads and an ending that highlights the pointlessness of senseless violence. Beyond the focus on Hip-Hop and social/political issues, La Haine is known for its cinematography. The cinematography is what sets La Haine apart from Juice. The two films are definitely spiritually connected but the La Haine is ahead of Juice in terms of craft (which is kind of disappointing because Ernest Dickerson is a masterful cinematographer, responsible for some of Spike Lee's best work, but it didn’t really show in Juice). The camerawork in La Haine has you going; "how did they pull that off" or will have you playing certain scenes back and a lot of the shots are long & unedited. Besides Juice, La Haine nods at other films like Taxi Driver (there's a scene early on in the film where Vinz reenacts the "you talkin' to me?" scene). Certain shots are reminiscent of Bergman's Persona and the black & white cinematography reminds me of Jarmusch's Down By Law & Dead Man.

This film couldn't have been made at a better time. The mid-90's was an era when hip-hop was at an all time high (in my opinion), you couldn't go to the rap section in strawberries/virgin/tower and NOT buy a tape or CD. It seemed like everything was good (especially when compared to today). DJ & B-Boy battles were expanding overseas big time to places like Europe & Asia and other countries seemed to just appreciate hip-hop just as much (or more) than Americans. Thanks to the Criterion Collection this film is more accessible to American audiences but it’s still pushed more on to the art house crowd instead of young hip-hop audiences which is really who the film is geared towards. To this day I come across countless hip-hop lovers from my generation, as well as the previous generation, who have no idea that this film exists. I can’t speak on today's generation, but I have all the faith in the world that anyone who came up during the golden era of hip-hop would appreciate La Haine very much.
Marcus at 6:01 AM
Share
‹
›
Home
View web version