THE CINEMA OF APICHATPONG WEERASETHAKUL TOLD THROUGH IMAGES & STILLS 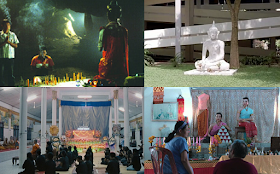 Film is like a drug. It is a shelter when you cannot deal with reality - Apichatpong Weerasethakul

Along with directors like Steve Mcqueen, Nicolas Refn and Fatih Akin - Apichatpong Weerasethakul is truly one of the "Leaders Of The New School". Like Karim Ainouz ('I Travel Because I Have To...') or John Carluccio ('Battle Sounds'), he's another filmmaker who made the transition from studying architecture (my major in college) to film, yet there's no direct trace of that in his work (unless you count the shots of all the landscapes in his work, but even that's kinda reaching). So naturally as an architecture graduate with a love for cinema this one is a bit personal and close to my heart (in fact my love for film trumps my interest in architecture & design to the point where it isn't even funny). Weerasethakul's work, which pretty much all takes place in Thailand, is rooted in things like nature, spiritualism, sexuality, subtle doses of religion, love, romance and surrealism. He's also clearly all about challenging the idea of traditional storytelling. Of all the young-ish/breakout directors of the last 6 years or so, he's one of the few who cant really be compared to anyone else. Sure there's hints of Tarkovsky or a little Wong Kar Wai in his work (if you really wanna reach) but at the end of the day he's one of the few original filmmakers of his era.

NATURE:
Apichatpong Weerasethakul always makes it a point to show the audience the beauty of Thailand and just nature in general. Watching one of his films on the big screen is a MUST (especially his more recent work like Uncle Boonme & Syndromes). Each frame makes you feel like you're actually in the jungle or among wild animals. And if there was ever one color to be associated with his work it would have to be green (the tall grass, the leaves and other various plant life). The actors in his films blend in to the natural surroundings to the point where they look they're just another lifeform growing in the jungle...

TRANSFORMATION & PARALLEL UNIVERSES:
In just about any Weerasethakul film you'll see at least one of the main characters transforming in one way or another. Whether it be the transformation of a man in to a transgendered woman ('The Adventures Of Iron Pussy') to the constant transformation of humans into animals or animal-like figures in 'Tropical Malady' (one of the main characters transforms into a tiger at the end of the film) and 'Uncle Boonmee' (one of the characters in the film turns into a giant monkey). And in a similar vein Weerasethakul constantly plays with the theme of parallel universes. In 'Syndromes And  A Century' we see the exact same scenarios acted out twice with the same actors in the same settings, each with its own slight twist. At the end of 'Uncle Boonmee...' we see our main characters essentially step outside of themselves and go in to another universe. Or in the same film we watch as the princess look at her reflection in the water only to see a more "attractive" image of herself... 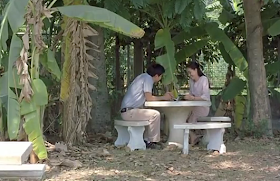 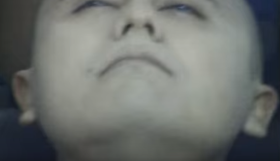 THE HUMAN BODY:
The actors in Weerasethakul's films are often shirtless or almost completely naked. I'm sure some of this has to do with the fact that most of his films take place in Thailand where I hear its quite hot, but still...he takes advantage of this by focusing his camera on the crevices of the bodies that don't always get shown in most films (the sweat, the different shades of skin, etc)...

SPIRITUALISM & RELIGION:
Another one of  Weerasethakul's talents is showing Buddhism and spirituality without coming off preachy or shoving it down the audiences throats. Its clear that he's a spiritual person and believes in a higher power but at the same time you don't feel like you're watching a religious film. He cleverly places monks as key figures (or even just in the background), ghosts and/or spirits as well as religious art all through out his work...


ROMANCE & SEXUALITY:
Whether its man & woman (Syndromes & A Century), man & man (Tropical Malady) or human & fish (Uncle Boonmee), Apichatpong Weerasethakul makes it a point to show all kinds of romantic relationships or attractions with the same care and objectivity. As an openly gay director, he doesn't show hetero relationships any differently than homosexual relationships (similar to other modern, openly directors like Gus Van Sant and Todd Haynes). He explores innocence and the fear of telling someone you love them (Syndromes) or the curiosity and slow attraction that starts to build between two people who don't really know each other...

SLUMBER...
The characters in Apichatpong's films often find themselves nodding off (sometimes involuntary like in the case of Cemetery Of Splendour) or dreaming in an effort to connect with some spiritual power (Tropical Malady) or a deceased relative (Uncle Boonmee). Plus, his films just have a sleepy/meditative quality...