"Sounds like you guys fancy yourselves as drinkers, eh?"
"Yeah maybe just a little bit, I think we just beat the Irish" 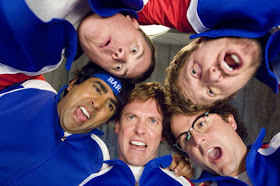 In this next installment of underrated & overlooked comedies (see my recent write-up of 'Hot Tub Time Machine') we're gonna take a look at a film that holds a little more importance than you'd think: 'Beerfest'. Sometimes writers (JD Salinger), musicians (Jackson C Frank) and even filmmakers (Charles Laughton) have that ONE stroke of genius in their career and can never tap in to that genius again or live up to expectation. Sometimes those artists never try again and stop with their one masterpiece while other artists keep trying and trying to match their one "hit" and can never top it or even come close. The film career of "Broken Lizard" (the comedy troupe responsible for hits like 'Super Troopers' and flops like 'Club Dread') falls in to the latter category. Many people feel that 'Super Troopers' is their "catcher in the rye" and just about everything they've done since has been pretty bad. For the most part that's actually true but... 'Beerfest' stands as the one (and only) piece of evidence that proves that Broken Lizard isn't a one hit wonder. Sure its not a masterpiece like 'Super Troopers' but then again how many comedies in this day and age have come close to touching the comedic genius of that movie? You'd think the minds behind something like 'Super Troopers' who came up with stuff like the "meow scene" or the horny German couple would be able to produce non stop hits one after the other. But their follow-up; 'Club Dread' - a satirical comedy/horror about a serial killer murdering people on an island, was one of the biggest disappointments in years. Seriously, I think I laughed a total of 2-1/2 times while watching that. Then there was 'Puddle Cruiser' - Broken Lizard's early film from the late 90's which got released AFTER they gained popularity. Although 'Puddle Cruiser' has elements of 'Super Troopers' in it (both films are about a gang of irresponsible cops played by the same actors) I still only laughed 2-1/2 times. Both film were such letdowns that I didn't even bother to give 'Beerfest' a chance when it first came out. But after what's probably my 20th time watching it, I can honestly say I'm a fan... 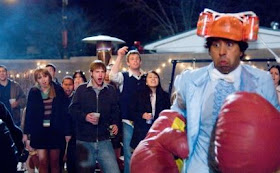 Sure 'Beerfest' went for some cheap & ridiculous laughs (scenes of drinking animal piss and ejaculating frog semen) and yes it does feature Mo'nique in a prominent supporting role, but the core plot is quite awesome (in an over the top silly kinda way): an underground beer drinking competition (in the same secret society-esque vein as Fight Club) where different countries face off against each other for beer drinking supremacy. On the surface this comes off as some fratboy bullshit (...and it kinda is). But fratboys aren't the only demographic out there who have a fun time getting drunk and playing drinking games so plenty of people could enjoy this movie. And speaking of demographics, the plot alone pretty much alienates just about any female on the planet so this film already has a strike against it (although I have had a couple of women tell me they found this movie funny so give it a chance, ladies). In 'Beerfest' two brothers (Tom and Jan) pull together a team of their closest friends (Barry, Landfill & Finklestein) to compete in the beer drinking competition known as: "BEERFEST" in order to win back their family's respect and claim ownership of a beer recipe that belongs to their great grandfather. They're also representing America which had always been the one country kept out of the competition until now (perhaps a comment on globalization and Americas tainted image to the rest of the world?). The teams have to put their drinking skills to the test by competing in games like beer pong, table tennis, thumper, beer chugging and more. Imagine an Olympics for beer drinking. The film even managed to get a supporting cast of academy award nominated actors like Donald Sutherland and Cloris Leachmam as well as German arthouse heavyweight Jurgen Prochnow (yes, there are many 'Das Boot' references in beerfest). So not only does this movie appeal to the lowest common denominator with a love for potty humor, but even movie snobs can crack a smirk at references to films like Das Boot. If you were let down by the broken lizard crew in the past and passed this movie over (which is understandable) I highly suggest giving it a shot. What followed 'Beerfest' was quite possibly they're worst movie ever: The Slammin' Salmon - An un funny movie with a dumb premise and forced humor that didn't just fall flat but comes off embarrassing at times. I mean seriously, watching this movie after watching 'Super Troopers', you'll find yourself going: "did they really think that would come off as funny?" Look, I'm all about filmmakers branching out and doing something new but maybe the broken lizard crew shoulda just stuck too making super trooper sequels (with the exception of beerfest). Why are so many comedy troop-based movies doomed to either failure (Mr. Show's 'Run Ronnie Run', The Tim and Eric movie or almost any SNL movie), obscurity (UCB's 'Martin and Orloff') or a minor cult following (the kids in the hall's 'Brain Candy' or Derrick Comedy's 'Mystery Team')?
Highlights from 'Beerfest' include the scene where the team goes to pick up Barry only to find out he's been working as a male prostitute, lines like; "I wanna put my dick in it" (after tasting the most delicious beer ever) or "I've been shittin' pancakes ever since" and Will Forte's overall presence.