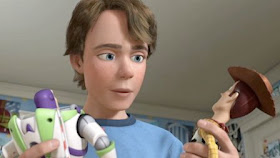 I'm sure by now most of you have seen this, but I'm pretty late on it. I admit that i slept on this movie. Even with all my friends telling me how great it was, i still planned on skipping it. Don't get it twisted, I'm not one of these pretentious film snobs that hate on pixar movies just for the sake of hating. I love incredibles , up and monsters inc. I just didn't think toy story 3 would be my kind of movie. Boy was i wrong. It was almost like god was trying to tell me i need to see this movie. On my flight back from spain (i flew Air France), Toy Story 3 was one of the MANY movie options i had to choose from. I must say, i always knew the french loved cinema more than most people, but shit...even their movie selection on their airlines are superior. I couldn't believe some of the movies i had to choose from on my flight back: wild at heart, le circle rouge, heat, 12 monkeys, animal kingdom and many more. Ive done a bit a of traveling over the years, but I've never got to choose from films by; David Lynch, Jean-Pierre Melville, Michael Mann or (GOOD) Terry Gilliam. In fact, the movie choices on my last 2 trips out of the country was shit like; Speed Racer, Red Belt and Blind Side. Good movies really do make flights go by faster. From now on, i may only plan my trips around locations that Air France flies too.
I always had a special attachment to my toys when i was a kid. And me being an only child meant that i had more than the average kid who had to share his stuff with his siblings (that's something foreign to me). Now, unlike Andy in toy story 3, i gave up playing (or even thinking about my action figures) long before going off too college, but the movie still touched an emotional nerve. Toy Story 3 kinda made me feel bad about giving my action figure away when i was kid. In fact there's that scene in in the movie when the pre-school kids play too rough with Andy's toys that brought back some memories. Even when i was young i use to hate kids like that. Id always avoid playing with them. They'd just take action figures and smash them together to simulate fighting. I hated that shit so much. I remember when i was 12/13 i went to my aunts house and saw some of my old toys on my cousins floor all broken and bent up with marker writing all over them. Toy Story 3 brought back all those memories.
In Toy 3 story, Woody, Buzz and the rest of the gang have come to terms with the sad fact that not only has Andy totally given up on playing with toys, but hes going away to college. After Andy decides to only take Woody to college with him (as a memento of his childhood), Buzz and the rest of the Toys fear that they'll be thrown away. A mix up occurs, and Andy's toys are accidentally sent to a day care center where they meet a new set of Toys, led by "Lots' O' Bear", who may not be as nice as they appear at first. Now they have to figure out a way to escape from the day care (or prison as it slowly turns out to be) before Andy leaves for college. The last half of this movie gets pretty "dark" for a family movie. Some parts in Toy Story 3 are pretty heavy for a little kid to handle, especially the scene towards the end when they're at the landfill, and pretty much accept the fact that they're about to die, just before being saved.
I think a lot of people relate to Toy Story 3 (or the Andy character specifically), because we've kinda grown up along side him with each movie, and can relate to growing out of playing with toys and action figures. I was pleasantly surprised with Toy Story 3. With the year almost over, i see Toy Story 3 maintaining a solid position on my top 5 of the year.
Marcus at 9:40 AM
Share
‹
›
Home
View web version