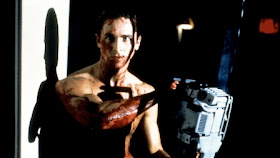 This movie will always be a nice comment on yuppies and the 80's in general. Thank god we have the 'american psycho' we know today, and not what almost became the cocaine induced Oliver Stone adaptation that was supposed to star Leonardo Dicaprio. In the film, Christian Bale plays a young successful wall street stock broker by day and a serial killer by night (...or is it all in his head). By now, I'm sure most of you reading this know that my mancrush on christian bale started after his amazing temper tantrum on the set of the last terminator movie (which bumped mike tyson's homophobic/homoerotic rant at the tyson/lewis press conference down to 2nd place). Other than 'the fighter', which has everyone talking about bale, 'American Pyscho' is Christian Bale's best performance. I mean when you think about it, the batman movies are obviously not about his acting, 'public enemies' focused on Johnny Depp more than him, and with the machinist, people seemed to be more hung up on his weight loss ability and less on his acting. Bale does an amazing job as a psychopath, and i cant help but think that director; Marry Harron drew some inspiration from Mike Leigh's character 'Jeremy G Smart' from his film 'Naked'. Oh and in case you guys didn't realize, this movie takes place during christmas so it counts

for those of you not familiar with the movie 'naked', here's the character i was talking about, that I'm sure was used in some way to shape the patrick bateman character. 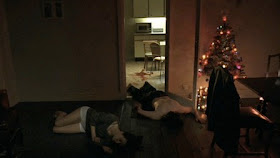 Sorry, but i had to throw in one "art house" film on the list. On christmas day, Morvern Callar wakes up to see that her boyfriend has committed suicide. This doesn't really seem to bother her (or director Lynne Ramsay was exploring a new way to express shock). Also, before his suicide, her boyfriend leaves behind a manuscript that she passes off as her own, which turns out to be very good and she sells it for $100,000. This is an anti-chick flick. Or, depending on how you look at it, its a chick flick that men can also enjoy. And Boards of Canada's amazing music makes this movie even better. In fact, i consider this movie to be one of the best of the last decade, and Samantha Morton's performance is also one of the best of the decade. 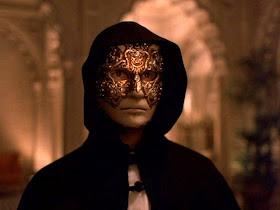 No matter how much i say this movie annoys me, i always end up watching it a couple of times a year. Maybe its time for me to just admit that i kinda like this movie. We all know the tale of stanley kubrick's last movie that left everyone scratching their heads (especially at that ending). When Dr. Harford (Tom Cruise) cant deal with the fact that his wife (Nicole Kidman) once considered cheating on him, he tries to get back at her by going to masked sex orgy, but ends up getting in way over his head and puts his and his family's life in danger. What annoys me the most about this movie is that if any other director shot a movie in london that was supposed to set in nyc, they would've gotten trashed, but because Kubrick did it, everyone (including Martin Scorsese) reached for the most bullshit excuses as to why Kubrick pulled off representing nyc with a green screen backdrop and scenic shots of the city (shot by someone else). Also, the scene where Nicole Kidman confesses her fantasy about cheating on her husband (a crucial part in the film) could have been executed so much better. I think of plenty of actresses who could have pulled off that scene much better. If anything, watch the movie because it was shot well (like any kubrick film), had a great soundtrack, and the sex orgy sequence was very good. But overall the acting was kinda flat. 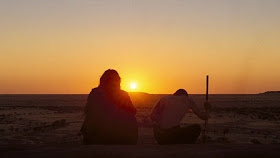 Just trying to throw in yet another non-traditional christmas movie (this story takes place during christmas). This is a great modern western that stands out above most because of its dark, moody, atmosphere (probably due to nick cave's influence). For years, there have been plenty of Australian films that many would consider a "western", but this may be the first (or at least most successful) crossover to incorporate Aborigines. In 'The Proposition', Guy Pierce is hired by Ray Winstone (in one of his best performances ever) to hunt down and kill a sadistic gang of outlaws under the command of Pierce's brother (played by Danny Huston). This movie is way more bloody and violent than your average cowboy movie. Fans of Deadwood or The Assassination of Jesse James should enjoy this movie. 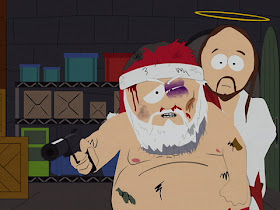 I threw in a tv episode in one of my "movies for halloween" lists back in october, so why not do the same for christmas. In this episode of southpark, the 4 boy and Jesus have to save Santa Klaus from terrorists after they shoot his sleigh down because they have mistaken santa for a terrorists. This was during the period where was southpark was getting super preachy and a bit obnoxious at time, but this episode in particular wasn't that bad. The highlight of this episode for me was the random reference to david o russell's 'three kings' (the torture scene). I was never a fan of the southpark christmas episodes that feature mr hanky because, just like cartman, i cant stand that character. But I'll make an exception with this episode.
link to full episode:http://www.southparkstudios.com/full-episodes/s06e17-red-sleigh-down 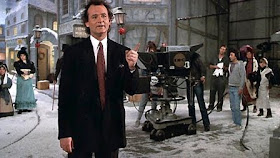 This one is a little obvious, but it never gets old. As far as I'm concerned, this is the best adaptation of a christmas carol yet. This is Bill Murray at his prime. And just like most of you, i am getting kinda sick of 'a christmas story'. For the last few years, Ive only watched it for a few scenes, but never all the way through. Luckily, just like TNT does with 'a christmas story', AMC will be showing 'Scrooged' for 24 hours starting on christmas eve. Bill Murray is obviously hilarious in this, but the supporting cast is also great. Aside from him, Carol Kane is probably my favorite character in the movie as the ghost of christmas present.