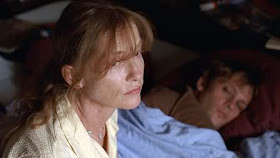 I got a nice sneak peak of Claire Denis's latest; 'White Material' last night (a movie that i wish i saw at last years NY film fest over Todd Solondz SUPER disappointing; 'Life During Wartime'). Honestly, I've had my fill of movies set in Africa that are from the perspective of a white person. If its not Morgan Freeman sacrificing his life for Stephen Dorf in 'The Power of One' or Donald Sutherland and Marlon Brando saving South Africa in 'Cry Freedom', its Clint Eastwood making an oscar bait film with Matt Damon as the 'face' of south africa as a rugby player, conveniently released after Spike Lee called him out for his lack of representation of black soldiers in his war movies (which i think is a pretty pointless argument and also conveniently came about just as Spike Lee released his disappointing 'Miracle at St.Anna). And dont get me started on all the movies that portray african soldiers as senseless murderers (like 'Black Hawk Down' or 'Tears of the Sun'). Only recently have films that are set in the Continent of Africa actually deal with something other than apartheid or some other type of economical or political struggle ('waiting for happiness' and 'u-carmen'). But for Claire Denis, probably one of the best directors out right now, i'll make an exception and put aside all my preconceived notions about films set in africa (lets not forget that she, unlike many other white directors, actually grew up in africa and has a better perspective on things). If her films aren't actually set in Africa ('chocolat'-not the johnny depp movie, 'beau travail' or 'white material'), then they at least focus on africans or african immigrants living in france ('35 shots of rum', 'i cant sleep', 'no fear'). In fact, even though the location of 'White Material' is supposed to be anonymous, it was filmed in the same country as her first film; Chocolat (a semi-autobiographical film about Denis's childhood in Africa).
Much like how 'Inspector Bellamy' (as disappointing to me as it may have been) was with Claude Charbol and Gerard Depardieu (a long overdue collaboration of two french film legends), 'White Material' was the first (and yes, long overdue) collaboration between Denis and Isabelle Hupert (two modern day french icons). In addition to that, Denis brought along many other familiar faces and regulars; Michael Subor (The Intruder, Beau Travail), Isaac Debankole (chocolat and no fear) and Tindersticks, who had previously done the music for 4 of Denis's previous films (nenette and boni, trouble everyday, 35 shots of rum and the intruder). In 'White Material' Hupert plays; Maria, a white coffee plantation owner in an unnamed African region that's in the middle of a civil war between the army and the rebels (who are mad up of mostly AK-47-carrying children and teenagers). Because the climate is becoming more and more dangerous, all of the locals are starting to leave, yet Maria feels she and her family have to stay in order to save their crop and not lose money. This task becomes more and more difficult due to the fact that there are hardly any workers left to hire (almost everyone has left in fear of their lives). Also, Maria's ex-husband and co-owner of the plantation played by Christopher 'Highlander' Lambert (where the hell has he been??), is trying to sell the land and get out as well, behind Maria's back. In addition, there's a subplot that focuses on a character known as; 'The Boxer' (played by Denis regular; Isaac Debankole). The leader of the rebels who has a bounty on his head by the military. He eventually finds his way to Maria's plantation, where she helps him to hide out. The trailer for this film may mislead you to believe its a film that's nothing but a sympathetic look at a white women living in a dangerous climate in Africa. It really isn't. Its a bit more complicated than that (much like many of Denis's other films). If anything, 'White Material' focuses on the assumption that just because a white family has been planted in Africa for generations that they will be an exception to the violence around them. Maria, aside from her obvious pride in not wanting to leave her coffee plantation, almost assumes that she's just like any other local black person. She almost looks at herself as an equal. But through a series of "reality checks", she slowly comes to realize that's not the case.
In a way, the atmosphere of 'White Material' kinda draws some comparison to Denis's earlier film; The Intruder (although white material has a much more straight forward plot). This is mainly due to Tinderstick's amazing soundtrack (which is very similar to their music in the Intruder). In true Denis fashion, there are many small implications and hints to things that at the same time tell the whole story. There are also many unanswered questions, and open ended issues (mainly the ending), and the angle about Maria's son kinda going insane. Like always, Denis doesn't miss a beat, and 'White Material' is on par with all her other work. I have yet to see a film by her that i'd rate less than 4 out of 5 stars.
Marcus at 10:57 AM
Share
‹
›
Home
View web version