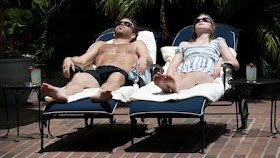 If there's people out there who still have a hard time accepting the fact that Sofia Coppola isn't like here father, and has no interest in making movies like her father, they're going to hate her latest film; 'somewhere'. now, if you're a fan of her work, chances are you're going to love this. As far as I'm concerned, 'Somewhere' is the best thing she's done since 'Virgin Suicides'. That might not be saying much because many people considered 'Lost In Translation' to be both; boring & overrated (i personally think its a good movie...just not great) and 'Marie Antionette', although ambitious, was kind of a disaster. But nevertheless, 'Somewhere' is a great film. It represents Sofia Coppola saying; "this is my style, and I'm not compromising anything".
In the film, Steven Dorph plays a Hollywood "bad boy" who's forced to re-examine his wild life after he has to take care of his 11 year old daughter for an unspecified amount of time. I give Coppola a lot respect for keeping my interest in a character that i wouldn't normally care about. For anyone who's seen 'Lost in Translation', by now you should know that Sofia is known for basing characters in her movies on real people (in 'Lost in Translation', Giovanni Ribisi was clearly supposed to be Spike Jonze, Anna Farris was supposed to be Cameron Diaz and Scarlett Johansson was supposed to be Sofia). I haven't been able to pin down who Dorf's character is supposed to be based on, but imagine a movie about Colin Ferrel (or someone like him) taking care of his daughter while juggling an acting career and trying to maintain a typical A-list actor lifestyle. Sounds pretty uninteresting, right? Normally i would agree too, but Sofia was able to make an interesting movie, and give a typically shallow character some depth.
What i loved most about 'Somewhere' is that this is the first time she's really stepped out of her comfort zone (as far as the plot goes. I'm aware that 'marie antionette' was her first big budget movie). Her first 3 films have all been slight variations of the same basic plot: attractive, blond, privileged females trying to find themselves in a suffocating world. I guess there's nothing wrong with that, but at certain point its time to move on, and try something new (which she did). I'm starting to think that a lot of these modern day female directors (lynne ramsey, andrea arnold, claire denis & sofia coppola) are better at showing the sensetive side of their male characters, than male directors.
Like all of her movies, the soundtrack is great (although its still not as good as the score Air did for 'Virgin Suicides'). The cinematography is beautiful, like all of her movies (courtesy of cinemetographer; Harris Savides, who's work can be seen in the films of Gus Van Sant and David Fincher). Now, like i said earlier, if you aren't a fan of her previous work, chances are you may not like this. There are a lot of extended scenes, minimal editing and there's not a lot of dialogue (when compared to your average movie).
Marcus at 10:59 AM
Share
‹
›
Home
View web version