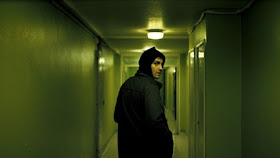 Phillip Ridley's 14 year absence from film was not worth the wait. And it doesn't help that the last movie he left us with 14 years ago was 'The Passion of Darkly Noon' (a heavy-handed religious film, with a waste of a cast that included; grace zabriskie, ashley judd and viggo mortensen). I guess i have so much hope for Ridley because he's responsible for one of my all time favorite movies; 'The Reflecting Skin' (something Ive been watching a lot over the last year). For a first time effort, The Reflecting Skin is one of best psychological thriller/horror/coming of age/dark comedies ever made. Unfortunately, Phillip Ridley wasnt able to tap in to the talent he once possessed, and instead he gave us a Polanski-esque, split personality/"its all in your head" thriller.
In Heartless, Jim Sturgess plays; Jamie, a depressed, introverted, socially awkward photographer who still hasn't recovered from the death of his father. He has a huge red birthmark that takes up half of his face (along with one of his arms and some of his chest), which not only makes it impossible for him to meet girls, but he's also the subject of ridicule from his neighbors (their nickname for him is "elephant man"). He lives in a rough London area which has been taken over by a gang of thugs, who might not even be human (one night Jamie quickly snaps a picture of one of them, and he discovers that they're these lizard-looking people with vampire teeth). He's finally pushed over the edge after his mother is mugged and murdered one night. This sends him in to a depression worse than ever. From that point on, the movie turns in to a story that's been done a million times. Jamie makes a deal with the devil (who just shows up out of nowhere) to give him a happier life. In return the devil asks for one favor; that he must kill a random person, cut his heart out and place it on the steps of a random church. That task alone is hard enough, but after completing the task, the devil (being the evil person that he is), goes against his word and wants to use Jamie for something even worse. On a side note, for some reason, the devil character keeps a little indian girl around as his sidekick/helper. I didn't really get that part of the movie.
Some of the scenes, acting and music are SO melodramatic that its kinda funny sometimes. And there's a "twist" ending, that you can see coming half way in to the movie. Now there are some positive things about 'Heartless'. As disappointing as the movie is overall, its still had a pretty cool, moody atmosphere (courtesy of Ridley's direction). Half of the cast is made of Mike Leigh's regular actors (Timothy Spall, Eddie Marsan and Ruth Sheen). Eddie Marson is the best thing about the movie. Phillip Ridley carefully places him in the middle of the movie (which is right around the time i started losing interest). Eddie Marson's quick appearance (similar to William Hurt's appearance in 'History of Violence') manages to keep you interested for a little while, but he's only in the movie for a one scene. Once Marsan's character goes away, the movie keeps getting worse until the disappointing ending.