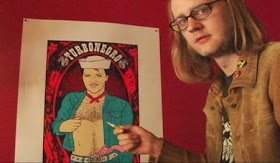 wow, sometimes i see so many movies a year i forget a few. 'Died Young, Stayed Pretty', a documentary about the underground world of concert poster art within indie music, would be a nice companion to this year's popular documentary; Exit Through The Giftshop'. Normally i avoid movies that are labeled; "a hit at sxsw". Because to me, the sxsw logo on a movie poster means nothing more than mumbling 20-something year-olds in a movie about love triangles or "finding yourself" (a genre some call "mumblecore"). Although 'Died Young, Stayed Pretty' has some flaws, it doesn't fit in to that typical sxsw film mold. Its still a solid film on something that's hardly been addressed in the world of film. Even if the subject of this documentary doesn't sound too eventful, at least watch it for the unique poster artists ("print mafia", ron libreti, bryce mccloud, etc) ), and the wide variety of colorful art that they produce ranging from loud & colorful to pen sketches on notebook paper.
This documentaries main problem is the structure (or lack of it after a certain point). As the documentary goes on, the director just kinda jumps around from one interview to the next. This didn't really bother me so much, because the artists and the exhibition of their art was enough to satisfy me, although i totally understand if some people get annoyed at the movies schizophrenic style. There's not much focus on the history or origin of movie poster art either. The documentary mainly focuses on the present day artists, and their views on love, life, and the current state of poster art. One unique quality about this documentary is that it doesn't really focus on the actual music or musicians that the artists make their posters for (although one of the artists does give us some history and insight in to the supposed closet homosexual life of elvis presely). Along with 'Exit Through The Giftshop', 'Died Young, Stayed Pretty' also shares a similar vibe and structure with 'Beautiful Losers' (the documentary about the young 'alternative' artists of the 1990's like Harmony Korine and Shepard Feary). So chances are if you like either movie, you'll like 'Died Young, Stayed Pretty'.