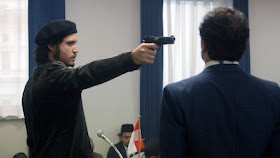 I'm pretty disappointed just for the simple fact that i sat through a 5-1/2 hour movie only to come out saying; "Yeah, it was ok". If i sit through a movie that long i wanna come out amazed. That shouldn't be too much to ask especially when I've dedicated the majority of my day to watching it. Olivier Assayas' biopic (his first in fact) about pro-Palestinian terrorist; "Carlos The Jackal" (Ilich Ramírez Sánchez) had many problems. Don't get me wrong, it was well acted, especially by lead actor; Edgar Ramirez (who's set to portray Pablo Escobar in his next role). It was also shot very well. I was so excited to see this mainly because aside from Steven Soderbergh and Richard Linklater, Olivier Assayas has the most eclectic range of any director working today. Watch 'Demonlover' and 'Summer Hours' back-to-back, or watch 'Irma Vep' and 'Clean' (both films star Maggie Cheung) back-to-back to see what I'm talking about. Now i give Assayas respect for taking on such a tough project. As a filmmaker he's never made a movie quite like this (although on a personal level for him, it actually makes sense that he directed 'Carlos' seeing that he grew up in France during the time period where Carlos The Jackal was very active and most known).
For some reason these super-long biopics that are based on true events ('red riding') or focus on both; the rise and file of a famous historical figures (che guevarra or carlos the jackal), always seem to start with a bang, but the last half of the film always seems to fall short and just drag on. Take 'Che' for example. The first part of 'Che' was almost perfect as far as I'm concerned, but the 2nd part seemed to have no direction at times. But because the first part was so great, it still kinda made up for the problematic 2nd half (i cant say the same about 'Carlos'). 'Che' is probably the perfect movie to compare 'Carlos' with. Both films are about controversial historical figures who some consider terrorists while others consider heros (i personally think Carlos was way worse than Che Guevarra, but that's just me), both movies are long as hell, neither get too much in to the childhood/early years of the subjects (although 'Che' didn't really have to do that because we already have 'Motorcycle Diaries') and like i said earlier, both have somewhat disappointing endings.
In the film Olivier Assayas takes us from Carlos's first mission to prove himself for the pro Palestinian organization; PLFP, to his most notorious mission (raiding the OPEC building in Vienna) to his downfall into obscurity due to too many failed terrorist attempts and the fall of the Berlin wall (marking an end to the cold war). In my opinion, there's no real mention as to why Carlos was so gung-ho on being this pro-Palestinian terrorists, when he was Latino. I understand wanting to fight for other oppressed people, but there's gotta be a REALLY good reason to wanna risk your life so many times for something that doesn't really directly affect you. Carlos was Venezuelan-born and raised in England. Neither; Palestine or Israel have that much to do with him (although I'm sure someone will find a way to prove that statement wrong). I mean Che Guevarra may not have been Cuban, but he eventually (TRIED) to take his fight to all of Latin American (and pretty much failed). I could sense that the film was trying its best to be fair and balanced and not take a side, but no matter what at the end of the day this movie kinda portrays Carlos as this cool, womanizing, globe-trotting, gun-carrying agent, when in fact he was just a terrorist responsible for many innocent deaths.
I understand that there is a shorter 160 minute version of 'Carlos' (the version i saw at IFC was in fact a mini-series that was turned into a long roadshow movie with an intermission). Maybe the shortened version is better. But at the end of the day Olivier Assayas tried something different and I still consider him one of the 10 best directors working right now. 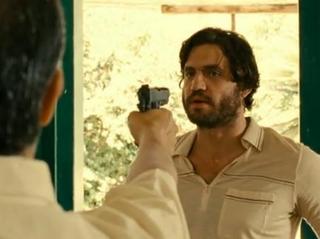 Well its over a year later and I'm still conflicted with Carlos. After chatting with a few folks about it recently (specifically Eric Prfiender - another contributor, like myself, at the pink smoke and Sean over at the World of Video) i get that Carlos was essentially the first "rockstar terrorist", he came about during a time when French people (like Assayas and his father) were very much in to revolution, communism, socialism, etc. and that's part of what Assayas was trying to convey in the film. Cool. The more I learn about Olivier Assayas' upbringing (raised by anti-fascist parents and was an impressionable teen in France during the height of revolution, revolt and counter-culture being "cool") the more it makes sense that he was the perfect person to make this film (like originally said in my review). To be honest Olivier Assayas could direct anything and I'd watch it. He made an erotic thriller/espionage film centered around animated pornography and i loved it. He's slowly moving in to that Michael Haneke/Claire Denis category of "can do no wrong". I also realize that upon my first viewing of Carlos I completely overlooked that the film was quite action packed and entertaining. To quote Eric on facebook: "It plays like one of the Bourne movies, but its real. Its six hours long but never boring". I even dig the fact that this film/mini-series got Olivier Assayas a little bit of mainstream attention (it was nominated for a golden globe). I now see that all these things are true, but I still have a problem with Carlos the person. And I know you don't have to like or root for someone just because they're the main focus of a film. Alexander Sokurov made a great film about Hitler ('Moloch') and I had no problem with it. But the main difference between a film like 'Moloch' and 'Carlos' is that its almost impossible to not feel like Carlos is this awesome person when in reality he wasn't. Were parts of his heart in the right place? Sure. ...Kinda. ...Maybe. But I still have a hard time accepting that Assayas doesn't have a little bit of a crush on him.
I'll continue to be more open-minded about 'Carlos' but I don't think I can ever fully LOVE it. There's plenty of bad people I like and root for in movies but they're all fictiscious. Carlos The Jackal was real.
Marcus at 12:31 PM
Share
‹
›
Home
View web version