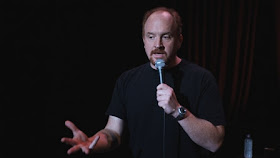 Hilarious could almost be looked at as a 'Bill Cosby Himself' for a newer generation (in fact Louis Ck sited this is one of his main influences). If you enjoy the stand-up/one man show style of Bill Cosby along with introspective and self depreciating humor you'll love this. What i love about each Louis CK stand-up special is that each one is kinda connected to the next. Each stand-up feels like a sequel, unlike other comedians who try to explore totally new material with each big stand up. In 'Hilarious' Louis CK give us all new material and stories about a lot of the same people as his previous stand-up specials. His children (a common subject in his stand-up) have grown since 'Shameless' and 'Chewed Up', bringing on new all material about them (like his oldest daughter being bitten by a pony and his youngest daughter taking a shit on the floor). He's still complaining about his weight and the stupid people he comes in contact with on a daily basis, but because CK is such a talented comedian and has such great delivery, i never get tired of hearing him talk shit about every day people.
Whats new is that now he's divorced, which brings on all new stories dealing with the 40-something year old CK trying to date again after being married for almost 10 years (this, along with some of the material in 'Hilarious' is a precursor to a lot of the material in his tv show on FX). Ever since 'Pootie Tang', Louis CK always seems to question weather or not he's a 'real director', but I think this movie is a prime example of his film making ability. If you follow any of his interviews or radio appreances (especially on Opie and Anthony), youd know that CK's knowledge of film is far more superior to the average stand-up comedian. In fact he sights Henri Clouzot's 'Diabolique' and Stanley Kubrick's 'Barry Lyndon' as his two of his all time favorite films. With 'Hilarious' he did what others like Jonathan Demme (Stop Making Sense) and Robert Townsend (Eddie Murphy's Raw) did, which was take a simple show/concert/stand-up and turn it in to an enjoyable film. Its also nice to see a good stand-up movie play in the theater. Martin Lawrence's last comedy special is the last one i remember playing in the theater, and i wasn't to crazy about that one. Even though Pootie Tang has gone on to gain a small cult following, it would be nice to see Louis CK take another stab at directing a film (maybe even something outside of comedy). I haven't been a fan of his screenplays ('why did I get married' and 'the invention of lying'), but his new TV on FX and 'Hilarious' clearly show the he knows his way around a movie camera, and can do more than just tell jokes. Id love to see his style of directing shown on his tv show transfer to film.