Cliché
a saying, expression, idea, or element of an artistic work which has been overused to the point of losing its original meaning or effect, rendering it a stereotype, especially when at some earlier time it was considered meaningful or novel. 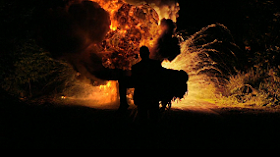 If people are gonna treat this like an actual movie, so will I (and I'm gonna criticize it accordingly just like I would any other movie or short film I don't like). Please keep in mind that I'm not commenting about the actual music in the video. I don't care enough about it to get in to it. There's a lot worse out there to criticize than Kanye West's music. Also, please be aware that I'm not nitpicking at this video just because it has Kanye West's name attached to it. I know that a lot of people out there love to hate Kanye West just for the sake of it. I'm not playing in to that, so please save the "hater" label which I'm sure some of you are gonna try to throw at me after reading this. Anyway...I planned to pay his short film/music video; 'Runaway' no attention, but when a movie by Kanye West draws comparison to Stanley Kubrick and Federico Fellini, I'm sorry but curiosity is gonna get the best of me. And look, I understand wanting to make an epic video in the style of Michael Jackson (in fact Kanye pays homage to Michael Jackson or his; 'nigga' as he likes to call the king of pop). But this was just too much.
Basically, this short film/music video is about West rescuing an 'Angel' (a half woman/half phoenix), and taking care of her on earth. Throughout the course of the film we follow the Angel as Kanye takes her under his wing as she becomes accustom to life on earth (similar to Milla Jovavich's character in 'The Fifth Element'). And I'm well aware that 'The Fifth Element' isn't the first to do what it did either. I'm just trying to reference something that everyone's seen. Anway, before the 5 minute mark, we already have the main character; running away from something through the woods in what's supposed to be a dream sequence that represents Kanye running from his fears or a mysterious, unknown element of danger (see the definition of Pretentious), carrying a woman in his arms while he walks away from an exploding car in the distance (see the definition of Cliché ), and nikki minaj's forced English accent voice-over narration (as if speaking in a British accents suddenly makes things more 'sophisticated'). Remember, that's just the first five minutes. Throughout the entire video, he have ballerina's, interpretive dance and other various art film clichés I could barely stomach 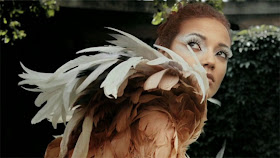 It's as if Kanye thinks by randomly throwing in; foreign languages/accents, ballerina's, loud pretty colors and people dressed in all white that he's making an 'art film'. And what's sad is that the average kanye fan (or average person in general for that matter) doesn't know about film like I do (don't get mad. its true), so they have nothing to reference. All they see are pretty images in slow-mo, with artsy shit thrown in here & there and because they have nothing compare it to, they think the its most amazing or unique thing they've ever seen. I'm almost certain the people who labeled 'Runway' an 'art film' don't know anything about that genre past the basic stuff you're supposed to know like; Bergman's 'The 7th Seal' or the work of Stanley Kubrick (which doesn't always deserve the 'Arthouse' label that it gets sometimes). It's funny, you ever notice how whenever a film is SLIGHTLY different from the norm, people compare it Stanley Kubrick, David Lynch or Fellini? I've seen enough work by those directors to know that there's not much of a (WORTHY) comparison outside of the loud, bright colors (which could be compared to some of Kubrick's work if you didn't wanna put much thought in to it), and the dinner party scene as well the scene were the angel is roaming through Kanye's garden (I guess that could be compared to not only Fellini's '8 1/2' but Alain Resnais' 'Last Year at Marienbad' as well).
What I'm really surprised about is how no one has called out West for totally ripping off the visual style of Mathew Barney. And I use the term; "ripping off" because I've heard so many people call 'Runaway' "original", that I'm pretty much forced to use a term that's the complete opposite. For anyone who's seen both; the work of Barney and West's latest video, anyone notice the "similarities" in the visual style? Not too original, huh? And there's nothing wrong with borrowing or paying homage to another film or filmmaker (some of my favorite directors do the same), but dont label what they do as "original" when its clearly not.


But like I said earlier, the average kanye west fan or even hip-hop fan (as sad as it may be) doesn't know who Matthew Barney or Alain Resnais are. They don't know what 'The Cremaster Cycle' is, so they label it 'original'. What's even more insulting is that I'm almost certain that the reason 'Runway' is getting so much praise is because this video came from a black hip-hop artist, and the average person doesn't relate 'black' or 'hip-hop' to 'art' that often. I mean the standards for black film are obviously low. Look at how much praise stuff like; 'Hustle & Flow', 'Precious' or the movies of Tyler Perry get. Seriously, let's be honest here. If Kanye West hired Martin Scorsese or even Spike Jonze to direct this video, and the final product was the same exact video we have right now, EVERYONE would call it pretentious or awful. But because the majority has such low expectations for not only hip-hop music, but black people in general, they give it praise simply because its outside of the "champagne and bitches in bikinis" or Hype Williams world of music videos that people are use to.
So yeah, in case you dont get it by now, I'm not a fan of the video, lol.
Marcus at 2:49 PM
Share
‹
›
Home
View web version