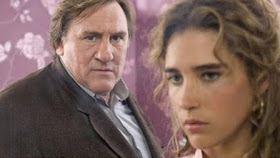 May Claude Charbol rest in peace, but i wasn't a fan of his final film (which oddly enough was his first ever Collaboration with iconic french actor Gerard Depardieu). This could be due to the fact that I'm not the 'afficionado' of Charbol's work like i am with other directors that i follow. It almost seems like in order to enjoy 'Inspector Bellamy' you have to really understand Charbol's style. I mean, i wouldn't throw someone in headfirst into the world of David Lynch by showing them 'Inland Empire' or recommend 'Eyes Wide Shut' to someone as their first Kubrick film. To be honest, of his large body of work, the only films of his that's Ive seen are; The Bridesmaid (which i thought was great), A Comedy of power (which i wasn't crazy about) and La Ceramonie (which i enjoyed as well). Maybe after i see more of his stuff, i might revisit 'Inspector Bellamy' and my opinion on it may change. But as of now, I'm not that impressed.
While on vacation, infamous police detective and author; Paul Bellamy (played by Gerard Depardieu) is pulled in to a mysterious case of a man; Noel Gentil, who faked his own death in order to collect insurance money so that he could run off with his mistress. Intrigued by Gentil and his story, Bellamy takes on the case and forms somewhat of a bond with him. This part of the movie i didn't quite buy. I didn't understand why Bellamy would just randomly take such a liking to Gentil. In fact, the only explanation that Bellamy gives is; "he intrigues me". Granted the case is made up of murder, mistaken identity, femme fetales, infidelity and other elements that would peak anyone's interest, but i needed a little more than just; "he intrigues me" as Bellamy's reasoning as to why he becomes so attached to the case. I didn't see much a connection there.
Also, in the midst of working on this new case (while he should be on vacation) Bellamy and his wife are visited by his unstable, alcoholic half brother; Jacques. His arrival makes the Bellamy household very tense because its clear that not only do the two brothers have some serious past family issues that are still unresolved, but its also clear that Bellamy's wife is cheating with his brother. And much like the relationship between Bellamy and Gentil, i didn't understand how a world class police inspector (who's job revolves around searching for clues), couldn't figure out that his wife and brother are cheating with other right under his nose. I mean, early in the movie its clear that Bellamy kinda suspects something between the two. In fact, there's one scene in the movie where Bellamy does confront his wife, but she casually dismisses it and Bellamy then drops it. Either he knows his wife is being unfaithful and he's just repressing it or he really has no clue. Either way, i thought that part of the story was weak.
'Inspector Bellamy' is a chilled out, laid back mystery for intellectuals with shades of Hitchcock. I imagine fans of Agatha Christie would take a liking to this. I may have many criticisms of the film, but it still had a few good points. Depardieu's acting, along with the rest of the cast, was excellent and the film was shot well (in fact there are a few standout shots of great cinematography). And for a police mystery with virtually no action whatsoever, i never found myself getting bored or nodding off (although i imagine many people with a short attention span would).
Marcus at 2:41 PM
Share
‹
›
Home
View web version